I am studying the Michelson interferometer shown in figure 2 (similar design shown below) of the AMRITA vlabs tutorial. There it is stated that

Since the reflecting surface of the beam splitter BS is the surface on the lower right, the light ray starting from the source S and undergoing reflection at the mirror M2 passes through the beam splitter three times, while the ray reflected at M1 travels through BS only once. The optical path length through the glass plate depends on its index of refraction, which causes an optical path difference between the two beams. To compensate for this, a glass plate CP of the same thickness and index of refraction as that of BS is introduced between M1 and BS. 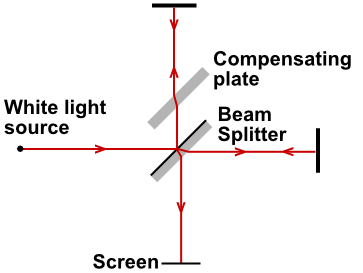 Can the same condition that the optical path lengths are the same be satisfied by removing the compensator plate and rotating the beam splitter around so that both beam paths travel through glass only once?

As you've observed in your edit, if you flip the orientation of the beamsplitter such that the thick part is now on the back side, then you still need to use the compensator plate in the other arm.

You might wonder why a compensator plate is used at all. In an interferometer which uses monochromatic light (i.e. a laser) you could just shift the position of one of the end mirrors to compensate for the extra optical path length picked up in the thick part of the beamsplitter. Real laser beams though have a finite spatial extent which changes as they propagate due to diffraction. When this beam passes through a material with a non-unitary index of refraction the mode changes more slowly. This effect is opposite to the change in phase while propagating through the medium. I.E. $$ d_{OPL}=n\ d \qquad\text{but}\qquad d_{BS}=\frac{d}{n} $$ where $d$ is the thickness of the glass plate, $d_{OPL}$ is the equivalent in-vacuo distance for the phase change, and $d_{BS}$ is the equivalent in-vacuo distance for the beam size change. Most practical interferometers use well-collimated beams whose size doesn't change much over the size of the interferometer so this effect is often unimportant.

If you are using a more broadband source in your interferometer, such as a lightbulb or a discharge lamp, then there is another advantage of using the glass plate. As pointed out in @User58220's comment, the dispersion in the material means that the different frequencies in your source will each see a slightly different length in the substrate of the beamsplitter. Using the same material in the other arm allows you to add exactly the same amount of optical distance for all of the different wavelengths in your source.

Not the answer you're looking for? Browse other questions tagged optics laser interferometry or ask your own question.