Gödel's solutions to Einstein's relativity equations and their consequences

Gödel gave certain solutions to Einstein's relativity equations that involved a rotating universe or something unusual like that; that predicted stable wormholes could exist and therefore time travel, if one could travel through a wormhole. He was a genius but obviously many scientists today don't think time travel could exist. But his solutions to Einstein's equations do supposedly work. So could this work by Gödel imply time travel might be possible?

Gödel's rotating universe solution does allow for time travel (closed timelike curves), but it has nothing to do with wormholes--in such a universe one could travel into one's own past just by taking a rocket on a long-term looping path through space, from any starting location. This page discussing Gödel's solution includes a spacetime diagram showing how future light cones at different points in space become tilted with distance relative to a given point that we label as the center (and presumably this depends on the choice of spacetime coordinate system too, since I know that in other spacetimes like that of a non-rotating black hole, different coordinate systems give different conclusions about whether light cones "tilt" at points closer to the black hole): 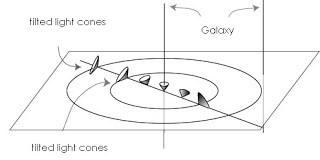 And this in turn implies it's possible to find a path which always remains inside the future light cone of each point along it (with a number of such light cones illustrated), so that it can represent the world line of a slower-than-light particle, but which allows the particle to travel along an overall loop that brings it back into its own past: 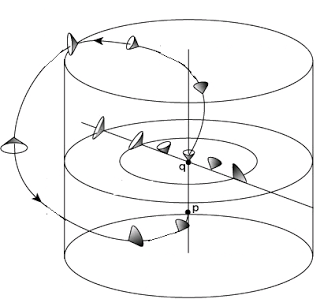 This website by a physicist who did his thesis on Godel's solution gives a basic introduction to what "rotating universe" means in this context, and although it doesn't really give any details on how time travel would work in such a universe, it does mention that "direct measurements" based on measurements of planetary orbits relative to background stars can only show that if our universe is rotating at all, the rotation rate must be less than 0.1 arc seconds per century, not enough to rule out the possibility we live in a Godel universe where the rotation must be around 0.01 arc seconds per century. However, he also mentions that other types of measurements indicate a much smaller upper bound on the rotation rate, although the calculation requires some cosmological assumptions:

The microwave background radiation gives another means of determining the vorticity. It is known to be highly isotropic (equal in all directions), whereas rotation most likely would give some distortion (blueshift in some directions, redshift in others). Calculations along these lines give 5-13 orders of magnitude lower limits on the vorticity. But they don't constitute any proof as they are based on certain cosmological models.

More on observational constraints on rotation here and here. Note however that in addition to Gödel's original solution, which was a stationary solution, there are models of rotating universes that are also expanding, and at least some of these models don't have closed timelike curves, so it's possible that even if observations did show a significant rotation rate this would be of no use to would-be time travelers. The paper Contributions of K. Gödel to Relativity and Cosmology by physicist George F. R. Ellis, available as a pdf link on this page, says in section 3 that after discovering his original stationary rotating universe solution, in 1950 Gödel presented examples of "more realistic universe models that both rotate and expand" and that "These are now called Bianchi universes", and quotes Gödel saying that "The precise necessary and sufficient condition for the non-existence of closed timelike lines (provided that the one-parameter manifold of the spaces $\rho = const$ is not closed) is that the metric in the spaces of constant density be spacelike", with Ellis commenting that "if the surfaces of homogeneity are timelike then closed timelike lines will occur (because these surfaces are compact)" (I'd be interested to know what timelike surfaces of homogeneity would actually look like observationally, and whether there's any way they could be consistent with observations in our universe...a further subtlety is that apparently there can be Bianchi models where 'surfaces of homogeneity change from spacelike to timelike', as noted on p. 144 of The Future of Theoretical Physics and Cosmology, and p. 481 of Relativistic Cosmology, but I couldn't find any information on whether this type of solution contains closed timelike curves). This pdf of a physics thesis also discusses models with vorticity (rotation) and expansion, and says on p. 33:

Note however that a non-vanishing vorticity does not necessarily imply the existence of closed timelike curves. Is there then any further features concerning the vorticity associated with a realistic cosmological model? Based on observations, a realistic model of the universe requires that the vorticity and other perturbations are small compared to the expansion, essentially meaning that it is reasonably close to the Big Bang model. However, it is a shortcoming that very few exact solutions belonging to this category are known. There is actually only one known exact homogeneous perfect fluid solution with both vorticity and expansion, which was found by Rosquist and belongs to Bianchi type $VI_0$.

On the other hand, a traversable wormhole is a totally separate type of spacetime which is permitted by Einstein's theory of general relativity, and which doesn't require any large-scale cosmological assumptions like Gödel's spacetime or the Bianchi models. It would also permit closed timelike curves (time travel) under certain circumstances, as first elaborated in this 1988 paper. However, there is also speculation that quantum effects might prevent this (general relativity doesn't deal with the effects of quantum physics on spacetime curvature), see Stephen Hawking's chronology protection conjecture (and as I mentioned in a comment, some theoretical investigations of the chronology protection conjecture in string theory suggest quantum effects could also rule out time travel in a Gödel universe, see here for example). If you're interested in reading more about this stuff, the book Black Holes and Time Warps has a good introduction to traversable wormholes (and the main concepts of general relativity) by one of the physicists who discovered them as a theoretical possibility, and the more recent book Time Travel and Warp Drives has discussion of traversable wormholes along with a number of other spacetimes which would theoretically allow for closed timelike curves, along with discussion of how quantum effects might prevent them.

I'm unsure if you're specifically asking about the Gödel spacetime or if your question is a more general one of whether time travel can exist. So let me try to give a general answer that addresses both.

Einstein's equation tells us how the geometry of spacetime is related to the distribution of matter and energy. Leaving aside the vexed issue of quantum gravity, I think most of us believe what general relativity tells us i.e. if we take some distribution of matter and energy then GR will predict the correct geometry. So if we had a rotating universe then the spacetime would indeed be described by Gödel's metric and closed timelike curves would exist (though actually the Gödel universe is a rather impractical way of attempting time travel).

There are plenty of other perfectly good solutions to Einstein's equation that would allow closed timelike curves. However they all have something in common. In his paper on the Chronology Protection Conjecture Hawking proved that closed timelike curves cannot be created in a finite system without using exotic matter. The Gödel universe gets round this because it's infinite, while other cunning ideas like the Alcubierre drive require exotic matter.

Now, as far as we know the universe isn't rotating, and exotic matter doesn't exist. So (I guess) most physicists don't believe that time travel is possible, even though Einstein's equation does have solutions that could allow it.

It's not unusual that well accepted theories can give bizarre results if you feed in bizarre initial conditions. For example Newton's equations of motion are (below relativistic speeds) amongst the most thoroughly tested and well accepted theories in physics. But if you feed in a negative mass then Newton's laws of motion predict some very strange behaviour. We don't regard this as a problem because no-one believes that negative masses exist. The situation is similar for closed timelike curves. Although general relativity does predict them it requires initial conditions that no-one thinks are possible.

Not the answer you're looking for? Browse other questions tagged general-relativity metric-tensor time-travel wormholes or ask your own question.

31
Wormholes & Time Machines - for *experts* in GR/maths
1
Wormholes and the illusion of time?
2
Travelling through a worm hole
2
Do Einstein's equations allow multiple solutions that agree in a neighborhood of a spacelike hypersurface?
10
How does the twin paradox work with wormholes?