How does a particular galaxy's apparent recessional velocity CHANGE as the universe expands?

By this I mean will the light from distant galaxies continue to show red shift (i.e. if you look at light from a particular galaxy now and in 10000 years time, the spectra will have been shifted again), or is there a certain red shift which always corresponds to a certain set of galaxies (those which are the same distance away from Earth)? I think the answer lies in the apparent recessional velocity from Earth, but I'm struggling to interpret how it will change, if at all.

(to give you an idea of my level of understanding of physics, I'm in the final year of my A levels, although I do quite a bit of reading on it).

There is an expectation that the redshift of an object will change with time. The details depend on the cosmological parameters (a plot is shown below).

This was first explored by Sandage (1962) who predicted that, in a matter-dominated universe (i.e. no consideration of dark energy back then), the redshift should decrease due to the braking action of gravity. The typical numbers quoted for a galaxy at $z=0.4$ at the present epoch were a change in redshift of $\sim -5\times10^{-6}$ km/s per year. Sandage also noted that measuring such shifts seemed impossible with the instruments of the day.

Science marches on: we now have dark energy to contend with and the possibility/probability that the expansion is accelerating. This could lead to an increasing redshift with time at redshifts below which dark energy dominates the expansion dynamics. So, a fascinating piece of work was done by Liske et al. (2008) who revisited this question and specifically looked at whether the effect could be detected using extremely large telescopes and new instruments. Their conclusion is simple: using the new European ELT (due to start working 2024) it will be possible to measure the effect in the Lyman alpha absorption lines seen along the line of sight towards quasars at redshifts of 2-5. However, it will need a 20 year baseline and about 400 nights of telescope time!

Here are some pictures from that paper. The first shows how the observed redshift of an object will change with cosmic time for different values of the main cosmological parameters. The x-axis is time (in Gyr, assuming the present-day Hubble constant is 70 km/s per Mpc), with zero representing now (note that different models predict a different age for the universe). The "concordance model" at the moment is that represented by the red lines ($\Omega_M=0.3$, $\Omega_\Lambda=0.7$), where the three different lines represent quasars with different redhifts at the present day. I guess the thing you should take away from this diagram is that different models predict different gradients in these plots - i.e. different rates of change of the redshift with time. Also note that the gradient now depends on the redshift. For the red concordance model, high redshifts are getting smaller with time, but low redshifts ($z<2$, where dark energy accelerates the expansion) are getting bigger with time. 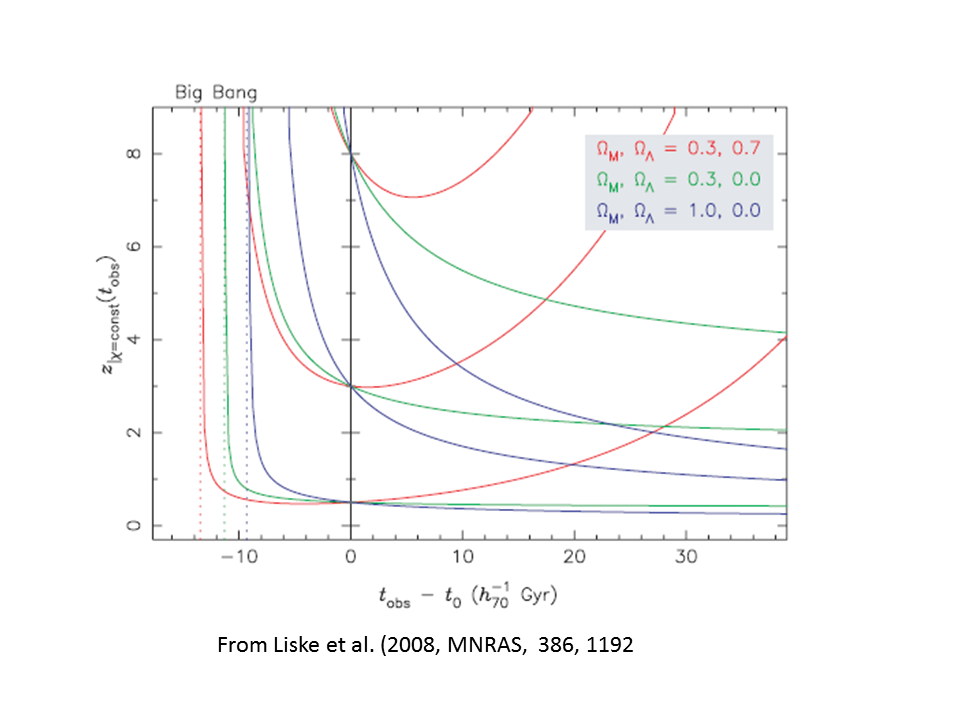 The paper then goes on to perform extensive simulations predicting how well a high resolution spectrograph on the E-ELT could perform with a 20 year observing baseline. The results are shown below, with predicted data points measured from the Lyman alpha absorption lines towards a set of quasars at various redshifts. The y-axis shows the predicted drift rate as a function of redshift. Appreciate the numbers! Even over 20 years, the changes in redshift amount to around 0.1 m/s, yet nevertheless, the prediction is that it can be observed and can be used as a model-independent way of directly measuring the expansion rate of the universe.

A slightly more accessible version of this work can be found in the ESO Messenger. 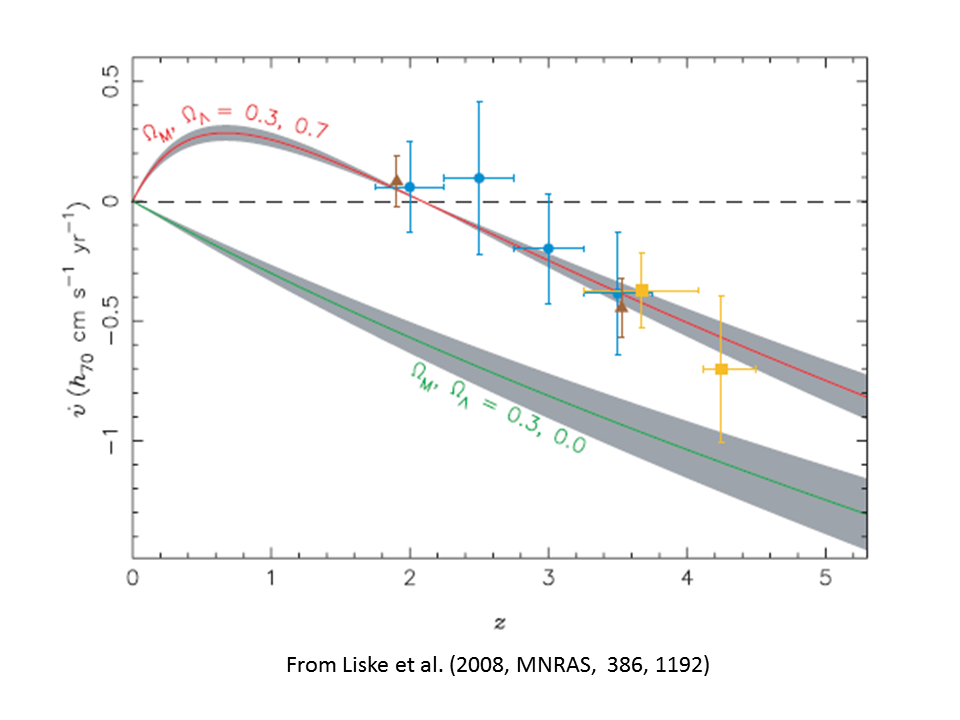 EDIT: There are also plans afoot to measure these effects at radio wavelengths using the Square Kilometre Array (due to commence operation in 2025?). Simulations by Klockner et al. (2015) suggest that precise measurements of the 21 cm (1.42 GHz) hydrogen line for ten million galaxies, each with a precison of around 10 m/s are required. The redshift drift would amount to a change in the line frequency at a given redshift of around 0.1 Hz (2 cm/s !) over a decade.

Cosmological red-shift depends on the difference in the scale factor between when the light was emitted and when it was received and not directly on recessional velocity, which is of dubious physical significance.

The recessional velocity of any given galaxy outside our own (ignoring peculiar velocities) in a LCDM-like cosmology will be arbitrarily large near the big bang, slow down, before increasing and becoming arbitrarily large in the future. In the current epoch the recessional velocity of a given galaxy is increasing. This most easy to see when the co-moving distance of the Hubble sphere is plotted against conformal time. (see the third diagram of Fig 1 in this paper)

See part of my recent answer to a similar question, for a few more details:

Not the answer you're looking for? Browse other questions tagged cosmology universe space-expansion space or ask your own question.

3
The range of light
2
Does the large red shift value of galaxies mean they are far away?
2
Expanding universe and the peculiar velocity
0
What is the ultimate "matter reaching diameter" (radius) for a laser beam with information sent out today compared to the observable universe?
4
How did Hubble come to the conclusion that the Universe is expanding?
1
Do the distances and velocities observed from galaxies other than Milky way really show that every point in the universe is the center?
0
Does Hubble's constant apply to galaxies that are blue-shifted/ moving towards us? Another question