Will an object always fall at an infinite speed in a black hole? [duplicate]

does it mean that at a blackhole, an object will fall at an infinite speed because of the infinitely strong gravitational pull of the blackhole?

Actually, defining exactly what you mean by the speed an object falls into a black hole is a tricky problem. In relativity you generally find that different observers observe different things. But we can work out what the various observers will see. Let's assume that the black hole is static so the geometry around it is described by the Schwarzschild metric. The task then is to calculate the orbits for objects moving in this spacetime. This is relatively simple by the standards of GR calculations, and you'll find it done in any introductory work on GR, but it's still a bit involved for non-nerds so I'll just quote the results.

where $r_s$ is the Schwarzschild radius. If we graph the velocity as a function of distance from the black hole we get:

The $x$ axis shows distance in Schwarzschild radii while the $y$ axis is the speed as a fraction of the speed of light. The speed peaks at about $0.38c$ then falls as you get nearer to the event horizon and falls to zero at the horizon. This is the source of the notorious claim that nothing can fall into a black hole.

An alternative strategy might be to hover at some distance $r$ from the black hole and measure the speed at which the falling object passes you. These observers are known as shell observers. If you do this you find a completely different variation of speed with distance:

This time the variation of the speed with distance looks like:

and this time the speed goes to $c$ as you approach the horizon. The difference between the two is because time slows down near a black hole, so if you're hovering near the event horizon velocities look faster because your time is running slower. You might be interested to note that the velocity calculated using equation (2) is equal to the Newtonian escape velocity. The event horizon is the distance where the escape velocity rises to the speed of light.

A black hole does not have an infinitely strong 'gravitational pull'; the spacetime curvature is finite at the horizon.

I see that John posted a more detailed version of my answer while I was typing this one. Oh well, I'll leave this one here for now.

I saw a some videos about the information paradox aka Hawking paradox. My understanding of it was that as soon as something is unable to leave a black hole (the event horizon where light cannot escape) that it's information is then represented as surface area (2d) on the outside of the black hole rather than our standard idea of volume (3d) and believing that the object is inside the black-hole.

What this means in regards to your question is that the object becomes a part of the black hole represented on it's surface so it never falls into the singularity and so does not have any acceleration after it goes through the event horizon.

I really wanted to respond to Gerry Harp’s question in the comments to John Rennie’s excellent answer below, but I don’t have the “reputation points” to do so.

In brief, the escape velocity for any planet is v = (2GM/r)^1/2. That can be derived from Newtonian physics by setting the gravitational potential energy Fds of a fall from infinity to r equal to the kinetic energy, that is, the integral from infinity to r of (GMm/r^2)dr = 2GMm/r = 1/2mv^2 gives us the formula. Since rs = 2GM/c^2, we can say that the escape velocity v = c(rs/r)^1/2. This is also by symmetry the velocity of any object that is falling towards a mass from an infinite distance. (It works to use these simple equations even for relativistic situations because the masses appear on both sides of the equation and can be canceled.)

The Shapiro Time Delay makes the speed of anything in a high gravitational field appear, to a distant viewer, as v’ = v(1-rs/r). A hand-waving argument is that, as an object falls towards a mass, the distance to the mass seems to contract as (1-rs/r)^1/2 while the time seems to slow by (1-rs/r)^1/2, for a total effect of (1-rs/r). It can also be derived from the Schwarzschild metric.

So Equation 1 in John Remmies’s answer is that the velocity of a falling object c(rs/r)^1/2 as seen from far away is v = c(1-rs/r) (rs/r)^1/2. We can plot these for the last few seconds of a fall into a black hole and get this result. Hence an object falling into a black hole thinks that it hits lightspeed at the event horizon, but we on Earth see it as stopping. Stephen Hawking wrote “Although you wouldn't notice anything particular as you fell into a black hole, someone watching you from a distance, would never see you cross the event horizon. Instead, you would appear to slow down, and hover just outside. You would get dimmer and dimmer, and redder and redder, until you were effectively lost from sight.”

I would put it as objects that fall into a black hole enter a region of such huge time speed difference compared to us, that while it sees itself as quickly zipping past the event horizon, we see billions of years pass before the object gets there. 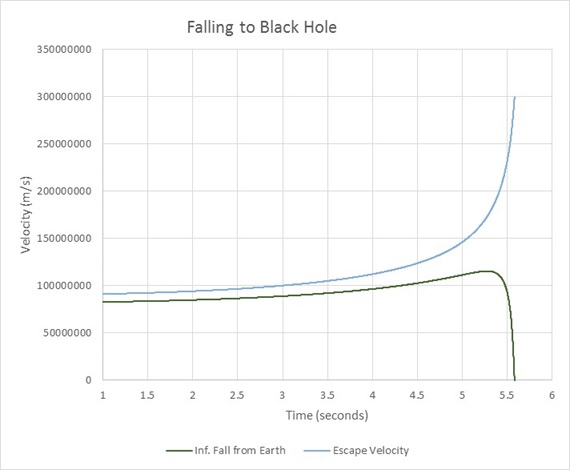 Quick short answer, someone else will give you a better one

Nobody, not the best people we have, nobody, knows what goes on inside a black hole. There is no way to look inside because no light comes out. So we can guess anything we want about infinite speeds etc.... till the cows come home, but no measure means no proof of your guess being correct.

Hope that this help you a little.

Btw, you say "at a black hole" , there is no definite edge to a black hole, you could be inside one (if it was big enough) and you would not know. Small ones , (they are not all the same size) would pull you apart and then pull the bits of you in at the fastest speed we know, the speed of light

Not the answer you're looking for? Browse other questions tagged general-relativity gravity black-holes speed-of-light faster-than-light or ask your own question.

2
How do you explain the observed fact that "black hole" objects move?
5
Gravity stronger than electromagnetic force in a black hole?
8
Quarks falling in a black hole?
0
Would infinite material cause a black hole?
0
How far away from Earth would we have to be so that an object released in space would not fall to Earth