Is it possible to watch the same distant star's supernova event twice?

What I think this means is if you observe a supernova that's at just the right distance away while the Earth is traveling away from the event during its orbit then wait half a year for when the Earth is traveling in the opposite direction, you'll sweep another slice of space from spacetime that also contains the supernova event. You should be able to adjust what distance this works for by waiting for different velocity differences during orbit or sending a satellite up to have more control over the velocity differences and wait times.

Do we have any photographed evidence of the same supernova exploding twice by carefully using the time dilation effects of small velocity differences across large distances?

You can't quite look back in time, unless you can outrun a photon. If you think about it, the event being observed is marked by a release of photons forming a sphere like shape. Once you are inside the sphere, you can observe the event. However, once you are inside, the only way to get outside is to go faster than the wave-front of photons. Unless you can get outside, you can't observe it again.

However, we can do better than that. We can view a supernova from multiple angles at once, using gravitational lensing!

You're not going to see the explosion twice, that's pretty much against the rules of SR and reference frames. However, with a lot of fortune, we can actually see the light from the remnant a second time (maybe more). Sorta

There are things called light echoes, which is an analog to the common acoustic echoes that we are all familiar with. When this occurs, what we observe is the light as it was (sans absorption effects) when the star exploded. And it's entirely based on the geometry of things near the supernova and our planet.

Suppose the yellow blob in the image below (from the linked Wiki page) is the supernova. 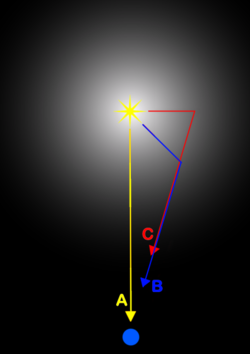 We typically see the light labeled A. However, if there is a dust cloud towards the right side (at either bend in paths B and C), then the light will take the long-way around and come to us much later.

What we see is rather beautiful: 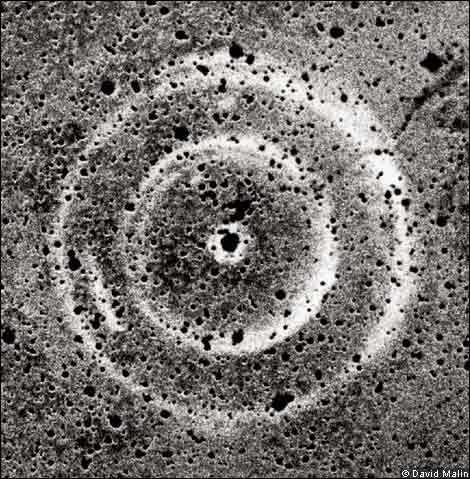 The concentric rings are tell-tale signs of the light echo. The light curve from the echoes can tell us a bit about the remnant type (e.g., Type I or Type II and all subclasses) and some characteristics of the dusty environment (due to absorptions).

One supernova has been observed 4 times, over the course of 20 years! This didn't involve the Earth's orbit. Instead, the supernova's light took 4 different routes from its source to Earth, the routes bending due to the gravity of galaxy clusters between the supernova and Earth. Because the lengths of these paths varied by up to 20 lightyears, the light travelling some paths took up to 20 years longer to reach us.

Very simply put, in order to view any event twice, both occasions in absolute real time (ignoring the time the light took to reach you, directly from the event), you would need to outrun the photons, which entails faster-than-light travel.

Now, if you're willing to accept less than real time, it is absolutely possible, though it gets less and less practical as you add more delay in trying to separate the two viewings in time. For example, you could:

In short, there are good reasons why scientists use cameras (often space telescopes).

This is a great way of thinking, and if you turn it around, you'll see the answer to your question.

For convenience, let's pretend the supernova happens at a single point in spacetime. The light from the supernova travels out along the forward light cone of that point.

Meanwhile, a few thousand light years away, the sun and the earth are hurtling through space and time. Since they're both massive objects, their worldlines are timelike curves. The earth's worldline spirals around the sun's, as sketched below. 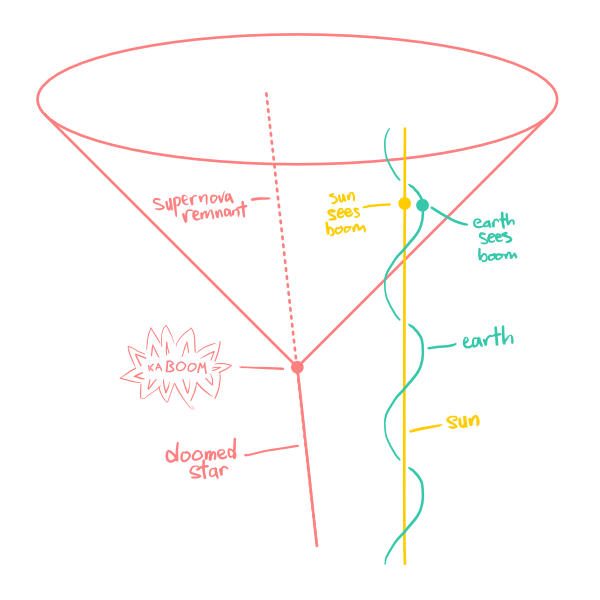 As QuadmasterXLII and Cort Ammon have pointed out, the situation is different in curved spacetime. When spacetime is warped, it's possible for a timelike curve to pass through a given forward light cone many times.

Similar to, but perhaps more repeatable on-demand than Quadmaster's answer:

After you see the supernova, just look at a black hole somewhere "to the side" (not along the line between the supernova and you) and compensate for the distortion.

A black hole, like a lens, bends light traveling near enough to be affected by its gravity (in our case, we want it to bend and pass without encountering the event-horizon). The hypotenuse of a triangle is never quite as long as the sum of the other two sides, so think of the photons from the original viewing traveling along the hypotenuse, and the blackhole as being the right-angle (though it doesn't have to necessarily be a right-angle).

The black hole allows you to view photons from the supernova which were emitted at the same time as your original observation...and these traveled a much further distance, so they'll arrive later for your convenience.

Not the answer you're looking for? Browse other questions tagged spacetime time-dilation supernova or ask your own question.

3
Time dilation at zero velocity (and zero gravity)
1
Do the effects of special relativity occur instantaneously?
2
Watching a live stream in spaceship traveling away from earth close to speed of light
2
Can supernovas or other explosive events release relativistic bombs?
2
Hypothetical video feed of time dilation
1
Time dilation in black hole collisions
3
Does time dilate at all in freefall depending on gravitational field?
2
If a very distant supernova has a high Doppler effect redshift do our eyes see its evolution picture like in 'slow motion'?
1
What is observed as rate of change of proper distance with time due to space-expansion to a binary star approaches, then exceeds the speed of light?