Do we need Dark Energy to explain the acceleration of the expansion of the universe?

As far as I know is the discovery that galaxies that are farther away are moving faster from us than galaxies the are closer by. This led to the theory of Dark Energy. The acceleration was speeding up. However, is the explanation not much simpler? The farther we look back the more juvenile the galaxies are. The Big Bang happened for those galaxies not as long ago compared to galaxies closer by. If the Big Bang happened 13.8 billion years ago and if we are looking at a galaxy which is 10 billion light years away than for that particular Galaxy the Big Bang happened only 3.8 billion years ago (13.8 - 10). During the Big Bang the inflation happened faster at the beginning than later, hence a ordinary explosion. Right after the explosion started, the material - in our case the galaxies - are moving faster. Gravity will eventually slow it down. In more nearby galaxies, gravity had much more time to slow the acceleration down because the Big Bang happened longer ago than for more distant galaxies as we see them today. What am I missing in this?

You are not missing anything, apart from a slight misinterpretation of the type Ia supernova cosmology results.

With no dark energy, the rate of expansion of the Universe would slow down. The gravitational "pull" of everything would be responsible for this de-celeration.

When we look at a distant galaxy, we see it as it was when the light was emitted. Indeed, more distant galaxies have two components to their redshift: if the expansion of the universe was neither accelerating or decelerating, Hubble's law, that the recession velocity was proportional to distance, would apply at all distances.

But in addition, for a decelerating universe, the recession velocity would be higher than predicted by Hubble's law - or to put it another way, the value of the Hubble "constant" was bigger in the past.

Now the type Ia supernova cosmology experiment set out to test this by measuring the velocities and effectively measuring the distance to very distant galaxies. You can try to match these velocity, distance pairs to an expanding universe model that has a time-varying Hubble constant. What they found was that at some point in the past, the deceleration of the universe stopped and it started to accelerate. The velocities of the distant galaxies was not high enough to match a purely decelerating universe.

The conclusion reached, now supported by other evidence - notably the cosmic microwave background fluctuations - is that there is a form of energy density in the universe (a pressure if you like), that causes space to expand, and in the latter billions of years of our Universe's development, this "dark energy" has come to dominate its dynamics, causing the expansion to accelerate.

I like the following image (from Perlmutter et al. 2003) - it has been populated with more data now - but it shows the point. The curves show the scale factor of the Universe as a function of time. A uniform expansion (a universe with no dark energy or gravitating matter would just be a straight line). The gradient of this graph at any point in time tells you the value of the Hubble "constant" at that time. The Universes with dark energy have a point of inflection where the gradient stops decreasing and starts increasing - i.e. the universe decelerates for a bit and then starts to accelerate. The observations of type Ia supernovae looked far enough back that they went (just) beyond this point of inflection and were able to see the difference between the measured velocities and the velocities predicted by a purely decelerating universe. There are quite a lot more measured supernovae now populating the region around 10 billion years ago, but I can't immediately lay my hands on an updated version. 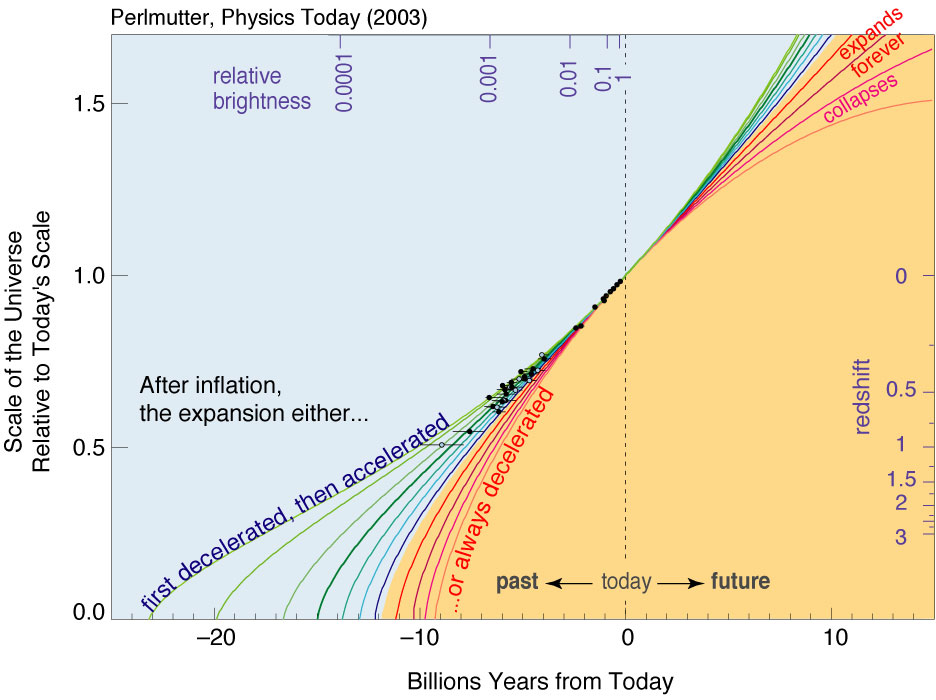 The comparison of near and far supernovae by the High-Z Supernova Search Team (Riess et al. 1998) and by the Supernova Cosmology Project team (Perlmutter et al. 1999) revealed the surprising transition of Universe’s expansion from deceleration to acceleration.

The research teams found that remote supernovae were 10% to 25% dimmer and therefore further away than expected as compared to the nearby local supernovae.

The deceleration parameter (q0 = ΩM/2) gives an idea how the expansion of the Universe decelerates.

Surprisingly, when the expansion rate data was analysed in terms of mass density (ΩM), ΩM was found to be –0.36. Since there is no such thing as negative mass, therefore, getting a negative value for the mass density made no sense, unless the Universe was accelerating (Riess 2012).

The above equation now helps explain the observed acceleration of the Universe’s expansion under the repulsive influence of an energy component (dark energy). Based on this, the significance of the cosmological constant was calculated, “99.7% to 99.8% confidence no matter what the mass density” (Riess 2012). This strongly confirmed cosmic acceleration.

However, there are problems associated with this.

The apparent transition of Universe’s expansion from deceleration to acceleration cannot be explained without invoking a mysterious and hypothetical energy component (dark energy) of unknown origin having no explanation in fundamental physics.

120-orders-of-magnitude discrepancy involved with it further complicates the problem to an unimaginable extent.

According to Durrer (2011), (as compared to dark matter) “Dark energy, however, is very disturbing. On the one hand, the fact that such an unexpected result has been found by observations shows that present cosmology is truly data driven and not dominated by ideas that can be made to fit sparse observations. Present cosmological data are too good to be brought into agreement with vague ideas. On the other hand, a small cosmological constant is so unexpected and difficult to bring into agreement with our ideas about fundamental physics that people have started to look into other possibilities”.

An experiment conducted by Sabulsky et al. (2019) by using atom interferometry to detect dark energy acting on a single atom placed inside an ultra-high vacuum chamber showed no trace of any mysterious energy.

One can explain why remote supernovae are further away than expected without acceleration on the basis of “consecutive expansion epochs of the Universe that preceded the current expansion epoch”.

As expected, the deceleration parameter (q0) also turns out to be negative (q0 < 0) while using such interpretation.

Given below is the abstract from my manuscript along with the link.

The comparison of redshift-distance relationship for high and low-redshift supernovae revealed the surprising transition of Universe’s expansion from deceleration to acceleration. As compared to local supernovae, remote supernovae are further away than expected. The expansion rate obtained for local supernovae is higher with low redshifts as compared to the expansion rate obtained for remote supernovae with high redshifts. Since observed redshifts provide an estimate of recession velocities in order to determine the expansion rate (km/s/Mpc) of the Universe, therefore, it is very disturbing to find that low recession velocities (just 1% of speed of light) indicate a faster rate of expansion (acceleration), whereas high recession velocities (60% of speed of light) indicate a slower rate of expansion (deceleration). In this paper I unravel an undiscovered aspect that perfectly mimics cosmic acceleration. Rather than “cosmic deceleration that preceded the current epoch of cosmic acceleration”, I show in this paper that “consecutive expansion epochs of the Universe that preceded the current expansion epoch were responsible for placing remote supernovae further away than expected”. As a consequence of consecutive expansion, expansion began for remote structures before it did for local structures; remote supernovae are therefore not only further away than expected, but they also happen to yield a slower rate of expansion even with “superluminal expansion velocities”. As a result of consecutive expansion, preceding expansion epochs appear to be decelerating as compared to the expansion epoch that succeeds it. The analysis is based on the redshift-distance relationship plotted for 580 type Ia supernovae from the Supernova Cosmology Project, 7 additional high-redshift type Ia supernovae discovered through the Advanced Camera for Surveys on the Hubble Space Telescope from the Great Observatories Origins Deep Survey Treasury program, and 1 additional very high-redshift type Ia supernova discovered with Wide Field and Planetary Camera 2 on the Hubble Space Telescope. The results obtained by the High-Z Supernova Search Team through observations of type Ia supernovae have also been analysed. The results obtained in this paper have been confirmed by plotting velocity-distance relationship, expansion rate vs. time relationship, expansion factor vs. time relationship, scale factor vs. time relationship, scale factor vs. distance relationship, distance-redshift relationship, and distance modulus vs. redshift relationship, moreover, deceleration parameter (q0) is also found to be negative (q0 < 0).

Not the answer you're looking for? Browse other questions tagged cosmology space-expansion dark-energy or ask your own question.