I'm working on a project and I need to know something. My project is about a toy CD hover craft. It's a balloon, connected to a CD via a tube or a pipe, like this: 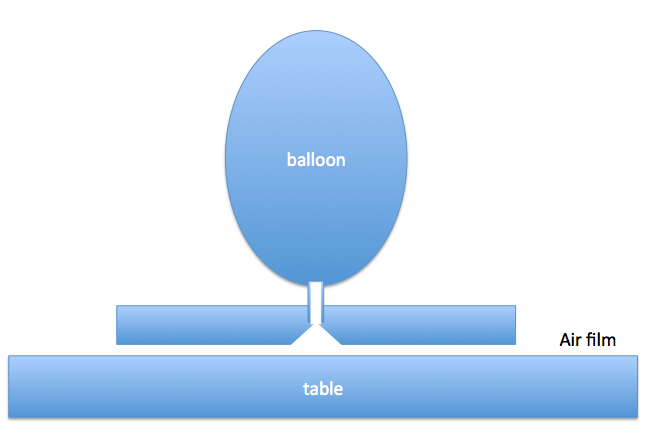 I want to know that is the volumetric flow rate in the pipe always equal or not?

That's an awesome project - I did something like that many, many years ago (using a carefully sanded wooden disk - CDs had not yet been invented).

The flow rate depends on the size of the pipe and the pressure in the balloon.

Now interestingly, a smaller balloon has a slightly higher pressure than a large balloon - see for example my answer to this earlier question.

There is another point though - the effect of the spacing between the hovercraft (CD) and the surface it hovers over. Now as long as the pipe provides a more severe constriction, the spacing of the disk to the surface will be less important. This is the principle behind using a large series resistor to create a poor man's constant current source: if you have for example a battery in series with a 10k resistor, the current it produces will be almost the same whether you then connect a 1 ohm or a 10 ohm resistor across it.

If the balloon is bigger, the time that the toy can hover will increase - by a surprisingly large amount. Using the result from my other answer that pressure (and thus flow rate) scales with $1/r^2$, and volume scales with $r^3$, then time (which is the time it takes for the balloon to deflate) will scale with $r^5$. In other words, a bigger balloon will allow for much longer floating time, assuming that the flow rate is proportional with the pressure (and that the pressure of the fully inflated balloon is still large enough to keep the craft floating). That's an interesting result I was not expecting.

104
Why is filling a balloon from your mouth much harder initially?
-2
How pressure effects on the time that a toy hovercraft hovers?

0
Determining fluid flow velocity from experimental volumetric flow rate data
3
Calculate water flow rate through orifice
2
Dynamic water pressure from flow and diameter
3
Bernoulli equations when different fluids and volumetric flow rates are involved
0
Airflow Out of a Container when a Liquid is pumped in
1
If the difference in pressure is zero between two points of a horizontal constant-radius pipe, why isn't flow rate zero?
0
Effect of pipe length with fan