Why the CMB has not been dispersed so far?

Imagine you have a box of black body radiation. What happens if you open the box for a long time? It becomes dispersed and no radiation remains in the box.

Now, apply this example to the Cosmic Microwave Background radiation. The CMB has been produced about 380,000 years after the Big Bang. Giving that the space is flat as many observations suggest, that radiation has been produced in a universe with no boundaries.

Calculations in the standard textbooks are done in such a way as if the CMB has been within a physical box, however expanding with the universal expansion. But, this is not the actual situation. The CMB has not been and is not enclosed by walls of a box, so it must have completely dispersed so far. What has prevented this to happen?

The CMB was emitted from everywhere, in all directions. The CMB emitted at the point where you are standing right now, has now been dispersed to a distance $d_\mathrm{CMB}$ equal to the distance that light can travel in the almost 13.8 billion years that have passed since it was emitted*.

On the other hand, the CMB emitted from a distance that is now $d_\mathrm{CMB}$, is what we observe today. That means that the CMB we observed today all comes from a thin shell of the Universe in which we are centered, and which has a radius of $d_\mathrm{CMB}$.

The drawing below may help understand; in a while from now, the picture would look exactly the same, except $d_\mathrm{CMB}$ has increased so that the sphere will be larger, since by that time, photons originating from farther away will have had the time to reach us. 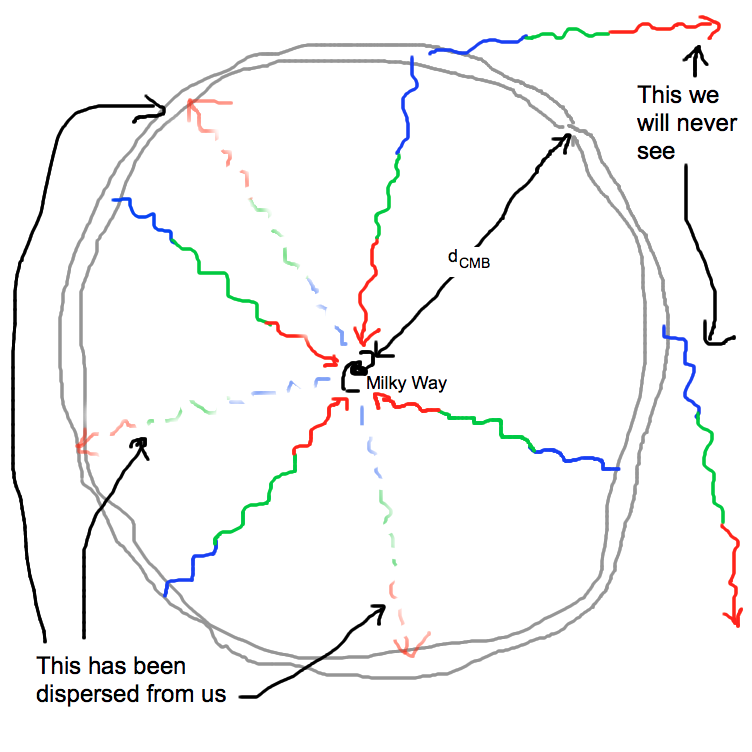 Cosmology models the data for the creation of the universe with the Big Bang model..

The BB has a beginning as a singularity, and in the early times there was no "flatness". The model is a four dimensional model in space time. All (x,y,z) points in our three dimensional neighborhood were in the original singularity; thus all points are at the center of the original production of matter and energy.

The "box" that released the black body radiation was the box about 380.000 years after the singularity when the photons decoupled and started their journey. In this paper the size of the universe is probed, using equations and the known light years from the BB. In fig2, relative sizes are given. The photon decoupling happened at about 380.000 years and you can check the relative size of the "box" for the black body radiation, assuming we are about 14 billion years after the BB. The answer here might help you.

1
Why is the CMB still visible?
20
Size of universe after inflation?

2
How is CMB related to the temperature of the universe
2
Hawking in A Brief History of Time: No beginning or end of the Universe
8
The Redshift of the CMB vs. Dark Energy
6
Why is CMB not considered as the edge of the universe?
6
Evidence before CMB
0
If the CMB was emitted at the ionization energy of hydrogen, why is it a blackbody spectrum instead of a line spectrum?
2
Is the CMB present in an artificial shielded vacuum?
0
Can we make a box isolated from Cosmic microwave background radiation?
3
How much photon energy has already been destroyed?