Suppose you place a number of rotating black holes in linear sequence (rotating around the same axis) between two stars at distance $d$ (assume as tightly packed as practical for purposes of calculation). If a ship enters each ergosphere and goes out into the next one, can it make the roundtrip back to home in less time than $2d/c$ (home local time) ?

What would be the simplest calculation to see that it cannot?

Edit to make the ergosphere overlapping region more symmetric, imagine there is a symmetric sequence of black holes in front of the treadmill arranged like this: 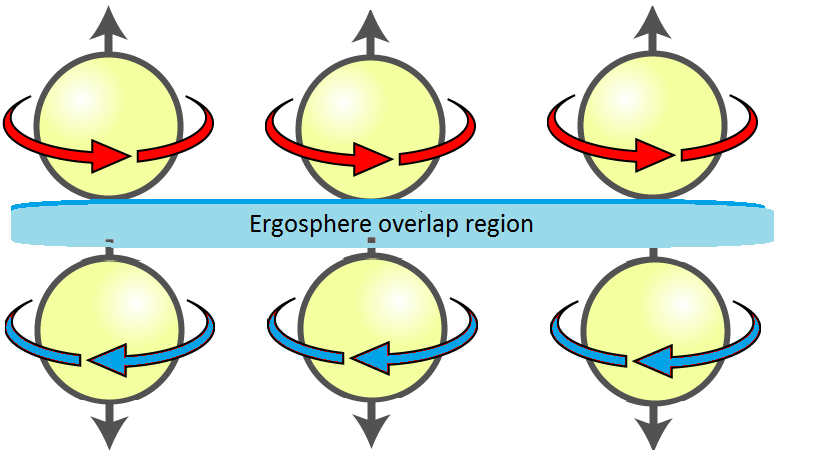 the symmetry in this arrangement should cancel the angular components (at least in a small region in the middle of overlapping region). Obviously the geometry for this thing is highly unstable.

This is impossible when the treadmill is not infinite in extent in the z direction and matter obeys the null energy condition (so it is impossible using Kerr black holes), but the argument I see is subtler than Lubos's answer suggests, although the physical intuition in his answer is impeccable.

First, an example that actually works--- this is the cosmic string. If you slowly bring in an infinite deficit-angle type relativistic cosmic string in the z direction so that it is close to inbetween two far-away points in the x-y plane, the angular wedge cut out by the cosmic string will allow a particle going around the cosmic string to outrun light going straight across from A to B. This is pure geometry, but it is not particularly enlightening, because the reason it works is by the gross scattering of particles by the string. The actual real causal distance between A and B is decreased by the cosmic string the moment A starts to see a lensed image of B, and this lensed image is closer.

To verify these statements, just draw a straight line from A to B, cut it at some point, place a cosmic string vertex somewhere below the line, and a cut-out wedge pointing straight down of some angle less than 180 degrees. The properties are obvious from the geodesics in the picture you get, when you remember that the spacetime is locally flat, with a global time, with gluing conditions at the boundaries of the wedge. This is an exact solution of 2+1 gravity, or of 3+1 cosmic strings, and so it is possible to outrun light in this bogus way, which has nothing to do with your suggestion.

By boosting such wedges, Gott tried to turn this outrunning-light property into a time machine. This doesn't work for subtle reasons, as established by t'Hooft, but this is a somewhat different question.

Given these cosmic string shenanigans with the actual distance between two points, to give a good answer to this question which can be turned into a theorem, you have to choose points A and B which are asymptotic, so that they are in the Minkowski region of the localized gravitational solution you are examining. This is impossible for cosmic strings, because the deficit angle makes the spacetime only ALE, not asymptotically Minkowski, it still cuts out an angle no matter how far out you go.

If you have a solution which decays as m/r at long distances, then the question becomes the following: looking at an infinitely distant point A, and link it to an infinitely distant point B, can you find paths in the gravitational solution which allows certain paths from A to B which pass through the gravitational region to outrun a light ray which is nearly straight, but bends an infinitesimal amount along the way so as to completely avoid the gravitating region, staying in the asymptotic region where the field is small.

The light cone from A entering the gravitational region is a light front sheet by the time it gets close, and similarly, the incoming light cone to B is a light front sheet. The question is about the evolution of the light-front sheet in an arbitrary gravitational metric. If there were a crazy path that outran the light front, then the boundary of the light-front along this path would spreading out from this path, to cover regions which it can reach which had not yet been reached by the rest of the front, and this would lead to a momentary increase in area of the front, as the blob spread out.

The way in which light fronts evolve does not allow spreading out, only collapse. The reason is the null energy condition--- the null geodesics that define the light front start out parallel, so they can only focus with their neighbors, and when they do, they are inside the light front and behind it, never ahead. The proof is essentially due to Hawking, it is contained in the proof that the area of a black hole horizon does not increase. This theorem is proved here: Second Law of Black Hole Thermodynamics . You can interpret the light front as the horizon of an enormous infinite black hole at infinity, and the light front passing over the solution is just the solution falling into the black hole. If there were rays that outran the front, this would be a violation of the null energy condition--- it would force a region of defocusing of geodesics.

Although this argument seems more involved than Lubos's, I must point out that the end conclusion is exactly the same--- when you can outrun light, there is a violation of a condition very closely related to the sub-extremality condition for black holes (the weak energy condition). So it is clear that for Kerr black holes which are not nakedly singular, there cannot be outrunning of light from infinity.

About a month ago, Gubser argued that superluminal neutrino travel in an extra dimension scenario requires a violation of the weak energy condition (null energy condition--- positive-stress-energy/positive-focusing along null geodesics). I only skimmed his paper for the purpose of evaluating the OPERA results, but his argument is certainly parallel to the one above.

Well, the simplest way to show that this method to overcome the speed-of-light barrier cannot work is to remove the portion of the spacetime occupied by the "black holes employed as accelerators" and look at the whole hypothetical superluminal trip from a different reference frame that is sufficiently boosted (we need to use different frames for the two halves of the trip). Just like in all superluminal motion, such a trip will look like a trip backwards in time which would lead to logical contradictions.

More microscopically, one may also easily mention where your intuition is going wrong if you think that the black holes accelerate you in average. Aside from the angular momentum, black holes also have a positive mass (which is greater than a certain function of the angular momentum, the extremality bound). So you want to know how the massive black holes influence the geometry and whether they may "speed up" others. Look at the ordinary Schwarzschild geometry: $$ ds^2 = -(1-2M/R) dt^2 + \frac{dr^2}{1-2M/R} + d\theta^2+ \sin^2\theta \,d\phi^2 $$ Just think about an astronaut moving in this geometry and ask what is the maximum allowed "coordinate speed" $dr/dt$. Well, the condition comes from causality i.e. the timelikeness of the interval, $$-(1-2M/R) dt^2 + \frac{dr^2}{1-2M/R} < 0.$$ That's equivalent to $$\frac{dr}{dt} < c (1-2GM/R) $$ I restored $c$ and $G$ to get to the usual units. So in the presence of a black hole, the maximum coordinate speed is actually smaller than the speed of light in the vacuum, as long as the mass is positive, and it has to be.

Not the answer you're looking for? Browse other questions tagged general-relativity black-holes kerr-metric or ask your own question.

5
Is the new Hawking black hole all about photon launch angles?
1
Ergosphere in different coordinates
3
What is the relation between orbital velocity and escape velocity in strongly relativistic situations?
4
Kerr Black hole EH and Ergosphere embedding
5
Is a stable orbit possible inside the ergosphere of a Kerr (spinning) black hole?
3
What's the inner ergosphere in a Kerr black hole?
6
Is ergosphere without singularity possible?