Is it possible to sail “close hauled” with a solar sailship?

I have not been able to find a clear or decisive answer about this. On Earth, a ship sails close hauled when the ship is, to some degree or another, facing into the wind. This is made possible with sails that are rigged along the length of the ship rather than perpendicular to the length. Is a similar thing practically or at least theoretically possible with a solar sailing vessel, to sail towards a star in this manner? Why or why not?

There is no "water" out there into which a solar sailer could dip its keel.

The question is about solar sails - I thought I would add this (too long for a comment) to clarify some confusion that is apparent in answers and comments.

The radiation force on a perfectly reflective sail of area $A$ is roughly $$ F_{rad} = 2\times\frac{L A}{4\pi r^2 c}$$ where $r$ is the distance from the Sun, $L$ is the solar luminosity and we assume the light is normal to the sail.

As solar radiation travels radially away from the Sun, it is not possible to exert a force on a solar sail radially inwards. It is however possible to angle a reflective solar sail so that the force is almost tangential to the Sun, since the force is directed at right angles to the mirror surface. Navigating towards a star would largely involve slowing down the sailship, and allowing gravity to do its thing (see picture from https://directory.eoportal.org/web/eoportal/satellite-missions/n/nanosail-d ). 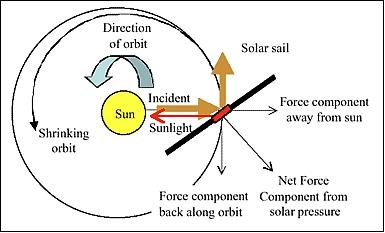 Yes, sort of, sometimes. As others have indicated, it is not possible for a solar sail to produce a force in the direction of the Sun. This does not, however, mean a solar sail cannot take a spacecraft to the Sun. If your spacecraft is in solar orbit, you can tilt the sail "backwards", reducing the orbital energy and lowering the orbit. The potential energy of the spacecraft decreases, its kinetic energy increases (by a smaller amount), and the rest of the energy is given to the photons, making them bluer.

Yes, but not the way you think. It's not analogous to a sail boat. A solar craft has no keel to resist movement in one direction, and I doubt that solar wind is dense enough to cause a noticeable wing effect with a sail.

But stars have their own complexities you can exploit instead.

In the end, this is more of an engineering problem than a physics problem. Be creative.

Not the answer you're looking for? Browse other questions tagged space-travel solar-wind or ask your own question.

7
Predicting solar storms?
1
Is any percentage of the regular solar wind that penetrates into Earth's atmosphere able to reach Earth's surface?
3
How could a solar sail be powered 'Upwind' by craft's own (laser) light source?
2
total energy in a typical solar Hard X ray flare
3
Possible Safe Areas In a Solar Flare
2
Solar prominence
4
What accelerates the solar wind?