What do spacelike, timelike and lightlike spacetime interval really mean?

is the square of the separation between the points where the events occur. In that case the spacetime interval becomes $\Delta s^2 = r^2 - c^2\Delta t^2$. The first event occurs at time $t_1$ and the second at time $t_2$ so that $c\Delta t$ is the distance light travels on that interval of time.

In that case, $\Delta s^2$ seems to be comparing the distance light travels between the occurrence of the events with their spatial separation. We now have the following definitions:

These are just mathematical definitions. What, however, is the physical intuition behind them? What does an interval being timelike, lightlike or spacelike mean?

Let's suppress some dimensions to simplify:

Notice it is also the equation of a hyperbola. Thus, the effect of a frame shift is to slide events around on hyperbolae of constant $\Delta s^2$.

Here's a helpful image from Wikipedia (attribution below): 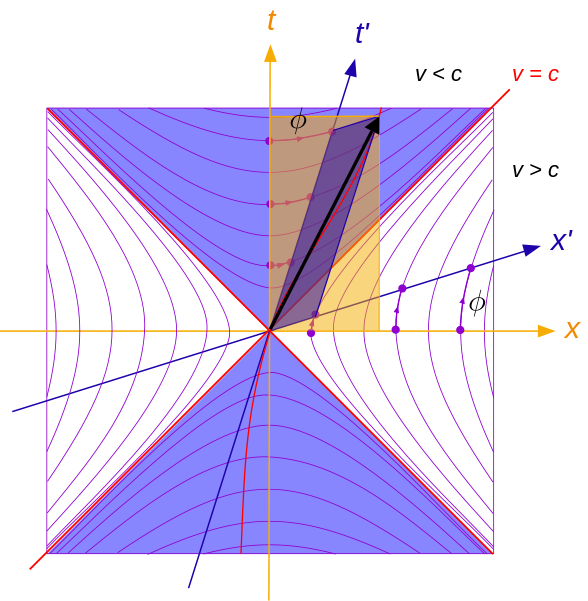 Ignore the vectors and just look at the hyperbolae. Events on a given hyperbola must, under a given frame boost, remain on that hyperbola.

Now you might notice those hyperbolae seem to come in two classes, those on the top and those on the bottom. The "v=c" hyperbolae - the straight lines - divide the two. Events on those are said to be "lightlike (or null) separated from the origin". Notice that for these, $\Delta s^2$ is just zero.

The hyperbolae in the purple regions are said to be timelike separated from the origin. This is because no matter how much they slide around on their hyperbolae, their ordering compared to the origin never changes. Any events in the purple regions which occur before (after) the origin will occur before (after) the origin to all observers. Thus, this set of events - plus the null events - is said to be causally connected with the origin. The fact that the ordering of these events with the origin in time is fixed motivates the term.

The hyperbolae in the white regions do not have this property. Some observers think they happened before O, while some think they happened after. It had therefore better be true that nothing about O depend logically on happening after (or before) these events! Otherwise we could break logic by running really fast.

However, notice that it is not possible to slide the white-region events from one side of the origin to the other. This makes the separation more like our normal ideal of "distance", so we say the events are spacelike separated.

Let's put it very simple: They tell you "how far something is apart compared to c"

time-like: if you are fast enough, you can be at (think spatial, like "at the festival") event a and at event b, it is only a "matter of time" until you see the second event

space-like: the two events are too far apart (in space). You cannot see both of them together, no matter how fast you are. As soon as event a happened and you go as fast as possible, event b will have happened before you arrive there.

light-like: exactly in between, the events are so far away that if you are as fast as light, you can see both events. If they are further away, they become space-like, if they are closer they become time-like

So a space-like separation makes any causal relation between the two events impossible, i.e. one cannot cause or influence the other.$^1$

1) as mentioned, a common cause (an event that is time-like to both events) can still make the two correlated.

Timelike is when an event is inside the lightcone (as you have mentioned) and as a result, one event CAN affect the other event (there can exist a causality between the two events. E.g. lets say there are two events, where I shoot a laser and another event where someone gets hit by a laser. If they are timelike seperated then the laser that hit the dud could have been from me).

Spacelike is when the two events are outside lightcone (as you have also mentioned) and as a result, one event CANNOT affect the other event. (For the previous example, it is impossible that my laser hit the dude and killed him, so I can safely conclude that someone else shot the laser to kill him.)

Lightlike is a special case which is like inbetween the two. For me to kill him, all the interval inside must have been vaccuum.

spacelike, timelike and lightlike [...] What, however, is the physical intuition behind?

Using "physical" terminology means (foremost, and even exclusively) to refer to distinguishable "participants" (a.k.a. "principal identifiable points", or "material points") where

In this terminology, any one event is characterized by who had taken part, and by which signals (of other events) the participants first observed at this coincidence occasion.

The relation between two distinct given events may accordingly be characterized as follows:

However, as technical terms, the words "spacelike, timelike and lightlike" require some (not quite arbitrary) additional assignment of coordinates to a given set of events, in order to describe their relation as elements of a Lorentzian manifold.

Not the answer you're looking for? Browse other questions tagged special-relativity spacetime metric-tensor causality or ask your own question.

-1
What does spacetime interval really mean?
1
What do spacelike and timelike intervals represent?
12
Why can no observer measure proper time here?
8
Does superluminal travel imply travelling back in time?
1
Does light (photons) transfer momentum really directly between emission and absorption?
2
What is a "Time-like" direction?
3
Why is the speed of causality equal to the speed of light?
2
Can we prove absolutely that FTL = causality violation
2
Understanding Invariance of Timelike Events
2
Do black holes present a contradiction in our understanding of GR? Or... what happens to the observer after infinity?
See more linked questions