My friend and I recently did an experiment on Lasers where we shot a laser beam through a Michelson interferometer and observed the interference pattern on the wall. Here is the basic setup: 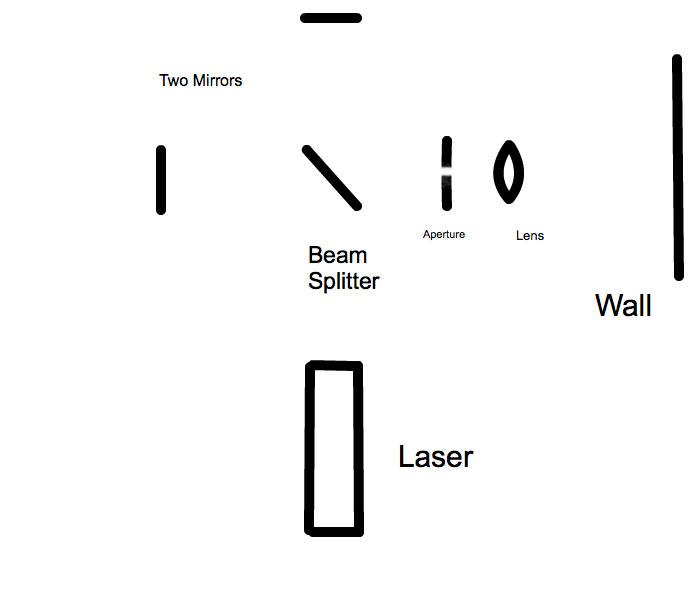 One basic thing we don't understand is why when the two arms of the Michelson interferometer are at the same distance, there is a spherical interference pattern. When we block one of the paths, we see a single dot of red light on the wall. It seems like when you unblock both paths, the two beams should constructively interfere, and a dot of red light of higher intensity would appear. But our observations show the circular interference pattern we mentioned earlier. So what is actually the correct model for the laser light?

I read the following link: Do interference rings disappear in an interferometer if the path lengths are identical? and I don't completely understand it.

The main thing I don't understand about the link is even if the two wave fronts have different curvatures, if you look at a particular point on the wall, shouldn't the waves have traveled the same distance on the two paths? Or perhaps I'm misunderstanding where the wave front on each path first gains some curvature.

The laser beams expand (slowly) as they travel. If you now consider the distance from the laser aperture (assumed to be a point) to the wall through the two arms (assumed to result in paths of unequal length $\ell$) then there will be a phase shift as a function of lateral position $d$ that goes as $(1-\cos(\frac{d}{\ell}))/\lambda$. If $\ell$ is different for the two arms, then there will be a phase shift between the two beams.

When the two arms are the same length, the pattern should disappear.

Not the answer you're looking for? Browse other questions tagged laser interference or ask your own question.

4
Do interference rings disappear in an interferometer if the path lengths are identical?