If a car appears in horison and within 2 seconds passes you by, whats the speed it's doing?

Using my ninja pause skills it seemed it took 2 seconds from the time the car appeared ( as a dot ) in horizon to the time it passed by the camera, although 2 second window of observation seems to lead to a great error in overall estimates, using the 745 as the value for 1 and 2 the error of human observation could be calculated (?)

In order to solve this question, we need to determine the distance from the eyes of the observer to the horizon, as this will be the relevant distance the car travels within those 2 seconds. Let's define a few variables:

This calculation makes a few considerable approximations. First, it assumes that the Earth is spherical, and that the region between the observer and the horizon is a part of that sphere. Light is assumed to move in perfectly straight lines, neglecting any effects such as diffusion or refraction.

Here is a highly exaggerated diagram showing the Earth, and a 'not-to-scale' observer: 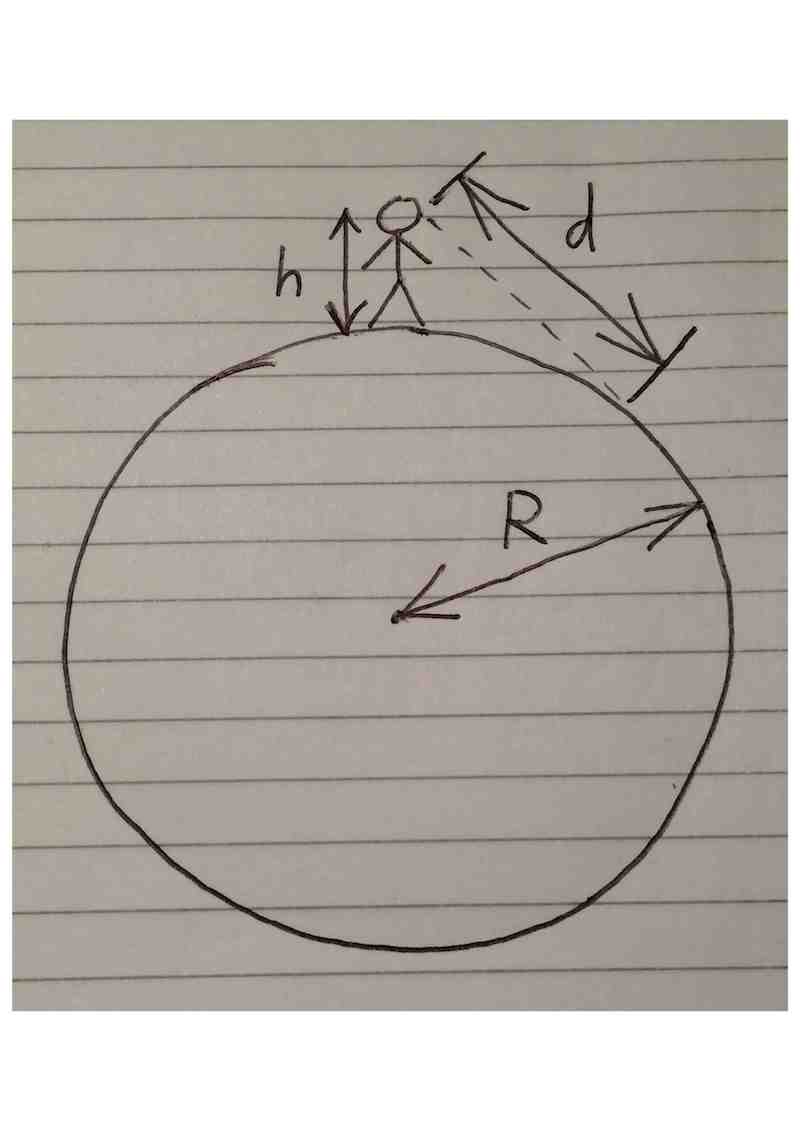 We can now create a right angle triangle, the three vertices located at the observer's eyes, the horizon (the end of the dotted line furthest from the observer), and the centre of the Earth. The sides of the triangle are $h+R$, $R$ and $d$. By a bit of Pythagoras' Theorem, it turns out that:

Then, given that $t = 2s$, we can calculate the velocity of the car with:

So, with a velocity of around $9000kmh^{-1}$, and a Mach Number of around $7.4$, it goes without saying that we have stumbled upon a pretty absurd result. Which makes me question whether this deserves be an answer or a comment. Anyways, this value gives us a few possible scenarios to work with:

Not the answer you're looking for? Browse other questions tagged homework-and-exercises kinematics or ask your own question.

3
Is the speed of a person falling down different if doing a forward somersault during the fall?
11
How can an object's instantaneous speed be zero and it's instantaneous acceleration be nonzero?
2
A car with constant speed doing a turn