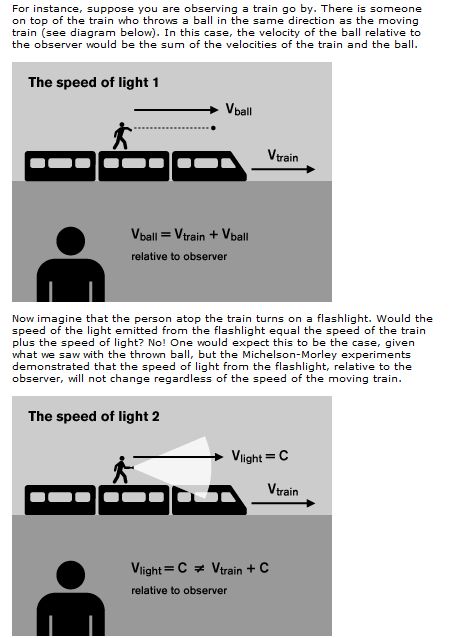 30 years after reading Einstein's books I'm having another go at understanding astrophysics, but one thing I didn't understand back then still doesn't make sense to me.

A core principle of special relativity is that all observers who undergo motion without acceleration (often one speaks about inertial frames) have an equal standing. That is, there is no observer who can claim to be the one and only correct observer, or the one and only who is truly at rest.

However, likewise, the observer on the train may note that he does not feel any acceleration, and thus defines an inertial frame in which he (and the train) are at rest, while the observer on the ground is moving with the same velocity, $v_{\textrm{train}}$, although in the other direction.

Intuitively, you may argue that this is absurd, since clearly the observer must know it is the train that is moving, not the remainder of Earth. However, in that case, would an observer on the Sun not also claim that it is absurd that the ground-based observer thinks he is at rest, when truly it is the Sun that does not move? And likewise, would someone sitting at the center of our galaxy not think similarly about the Sun-based observer, who clearly is moving? This argument can be repeated arbitrarily, and there is no end in sight. So, instead of searching for the one true observer at rest, it seems more logical to treat every observer equally who does not undergo acceleration. (Whether someone undergoes acceleration is, by the way, something all observers can agree upon without contradictions. Also, in what has been said, it has been ignored that, of course, Sun, Earth, and so on do indeed accelerate. However, in the context of your question, this is unimportant and only complicates matters.)

In what follows, let us assume for simplicity that the ball is not really thrown, but merely dropped.

So, when you say that the train's speed should not have any impact on the velocity of the ball after it is thrown, what behavior do you expect? Do you think the ground-based observer should see the ball drop without any horizontal movement? If so, would the observer on the train, who enjoys equal treatment from physics, not also be able to make this claim? And similarly a third observer who moves on board of a second train, which moves half as fast as the original train?

The situation can be resolved in multiple ways. You could perform an experiment by first noting that you are not accelerating (neglecting the Earth's movement), pick up any item, and let it drop. Clearly, the dropped item goes straight down, without picking up any velocity in the horizontal plane. The train-based observer performs exactly this experiment: He does not feel any acceleration, hence claims he is at rest, drops the ball, and sees it land by his feet. Now, of course, the ground-based observer also sees where the ball lands: by the thrower's feet. Since the thrower's feet move with $v_{\textrm{train}}$ horizontally, the ball must also have had that velocity, since otherwise it would have landed somewhere else.

Alternatively, you can adopt the viewpoint of the ground-based observer. Before the ball is dropped, he would see that the thrower and the ball move with $v_{\textrm{train}}$. Now, when the ball is dropped, a force would have to act on it to decelerate it from the initial speed $v_{\textrm{train}}$ to having $0$ velocity with regard to the ground. Which force would that be? The only forces that come to mind are gravity, which does accelerate the ball, but only vertically, and air resistance, which would, in reality, indeed make the ball land behind the train-based observer's feet somewhere on the rooftop of the train, although not exactly at the spot where it was when it was dropped. But if this force is neglected, either because it is small or because you are interested in the ball's velocity immediately after it is thrown (i.e. the force did not have time yet to decelerate the ball), there is no mechanism which could have slowed down the ball to $0$ velocity with regard to the ground.

Also, the next time you ride a train when it is at constant speed, jump and see where you land. (Hopefully, you ride inside the train, instead of on its roof, so that the air around you moves with the same velocity as the train, so you can forget about air resistance).

Did that help to resolve your problem?

Edit: Maybe, to avoid confusion I should add that $$ v_{\textrm{ball}}^{\textrm{ground-based}} = v_{\textrm{train}}^{\textrm{ground-based}} + v_{\textrm{ball}}^{\textrm{train-based}} $$ does not hold for velocities that are close to the speed of light (hence the second part of the picture you posted). But probably your book would explain better why this is the case than I would, so I'll refrain from treating that case now. Unless of course that remains unclear after having read my answer and then the corresponding section in your book, in which case feel free to ask for clarification.

Not the answer you're looking for? Browse other questions tagged special-relativity reference-frames velocity or ask your own question.

5
What is the physics behind Roger Federer's & Rafael Nadal's iconic shots
17
How does velocity cause time dilation?
0
Velocity time graph for a ball thrown vertically upwards and falling back down to be caught again by a person
0
Special relativity: when can we say in our good own right that something happened before something else?
3
Inertial reference frames vs. non-inertial reference frames
3
Special relativity and spinning tires