What was the motivation behind suggesting the trichromatic theory of vision?

In this thread, I asked whether it is true that the colors red, green and blue, through additive mixture, can make up any color. Turns out they can't.

However, when reading about the trichromatic theory of color vision (see a quote from a popular textbook in psychology in the linked thread), it is stated that this is the case, and also that it was the motivation for proposing the theory in the first place. For example, this is taken from the Wikipedia entry on trichromacy:

Trichromatic color vision is the ability of humans and some other animals to see different colors, mediated by interactions among three types of color-sensing cone cells.

This concept is described in the following depiction (taken from the very same Wikipedia article) where the x-axis denotes wavelength of light, the y-axis denotes neural response, and the three curves represent three different types of cones in the eye, each with its own neural response profile to different light. 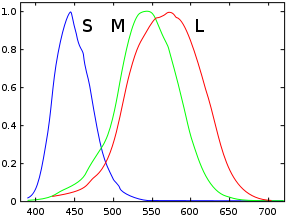 The trichromatic color theory began in the 18th century, when Thomas Young proposed that color vision was a result of three different photoreceptor cells. Hermann von Helmholtz later expanded on Young's ideas using color-matching experiments which showed that people with normal vision needed three wavelengths to create the normal range of colors [My emphasis]. Physiological evidence for trichromatic theory was later given by Gunnar Svaetichin (1956).

I don't know if there is some hidden meaning embedded in the phrase "normal range of colors" but supposing that isn't the case (please inform me if so), there seems to be somewhat of a contradiction going on here. Different sources states that the fact that the trichromatic theory of color vision was proposed in the first place was because three colors were found to be able to create any color through additive mixture (if there were other reasons, I haven't heard about them); however, this statement isn't true. WTF?

On what grounds was the trichromatic color vision theory proposed in the first place? Was it based on a misconception (red, green and blue can make up any perceivable color through additive mixture) that just happened to lead to the right answer (there being three different type of cones)?

Thomas Young's paper On the theory of light and colours is online in Google books, so you can see his reasoning, insofar as he presented it. Here is the most pertinent sentence from this paper:

Now, as it is almost impossible to conceive each sensitive point of the retina to contain an infinite number of particles, each capable of vibrating in perfect unison with every possible undulation, it becomes necessary to suppose the number limited, for instance, to the three principal colours, red, yellow, and blue.

However, this website says that he later changed the principal or primary colours to red, green, and violet.

So the original proposal was presumably based on the well-known fact (at least, to artists) that the subtractive color space was three-dimensional, with red, yellow, and blue as primary colors.

The revision to red, green, and violet is explained on p. 176-177 of the Google book I linked to above, and was based on the width of the bands of the various colors in the spectrum. I don't understand how this calculation worked at all.

Since only trichromats will have a 3-dimensional color space, he was correct in deducing that there were three color receptors.

There is a very basic observation, which is that the perceptual color space is three-dimensional. That's enough to make it very natural to hypothesize that there are three types of receptors. It's true that if you fix three wavelengths, those three wavelengths will not produce the entire color gamut of the human eye when you combine them additively. However, the trichromatic theory doesn't predict that additive mixture of three wavelengths produces the entire gamut, so this is not evidence for or against the thrichromatic theory. (I don't know whether people in Young's era even knew about the incomplete gamut. I would guess that they didn't, because their experiments were probably too crude.)

The reason for the contradiction is that when you do color experiments, it is difficult to get every perceived color by additive color mixing. What you do is present a subject with a paint swatch, and shine colors on a white wall to make a colored blob which matches as closely as possible in color.

If you choose any three colored light sources which are not perfectly matched in their spectral density to the receptor absorption curve in the eye, you can't match an arbitrary paint swatch exactly. You will get a subset of the color space. But if you shine the same colored light on the paint swatch, you change its emissions by adding a color to it. Adding a color to the paint swatch is like subtracting the same color from the blob, so this trick allows you to mix in negative amount of color.

With positive and negative coefficients, nearly any three colors will be able to fill the whole visual space (the exception are when two of the colors are perceptually indistinguishable, because they excite the receptors in the same way). The three dimensionality of the space means that the brain is recieving three separate real number inputs.

But when you actually mix colors in photography or screen design, you are not allowed to use negative numbers. In this case, you are restricted to positive coefficients, and the best you can do is try to match the output light as closely as possible to the receptor in the eye, so you use a red, green and blue phosphor, or a cyan, magenta, and yellow absorbing pigment.

But these are not quite enough to fill the whole color space. So photographic emulsions compensate by adding more pigments, which try to reproduce the full three dimensional color space.

Rhodopsin, the main light-absorbing pigment in the eye, is the one that is responsible for sensing general illumination, the brightness or darkness of a region. Rhodopsin has its own absorption peak, although it is broader than the color-sensitive pigments. To match visual perception exactly precisely, you also need a white-looking light in addition to the three colors which is precisely matched to rhodopsin absorption.

Artists have two sets of pigments called "hot" and "cool", which are designed to evoke different "temperatures". I believe the hot and cool pigments of the same shade are just maximally different in terms of their rhodopsin effect.

Two of the color receptors in the eye are located on the X-chromosome, and it has some significant mutation in the population, so that the receptor fields are different for different people. Women have two different X-chromosomes, and some women have different variant versions of these color receptors in the two copies. In theory, these women can express two different types of red and green pigments in the eye, and if the output from these different pigments are separated in the signal processing by the brain, and not averaged over, these women could conceivably detect colors with 4 different pigments, maybe 5.

Women who have the ability to discriminate between extra colors are called tetrachromats, and there have been two anecdotal reports of tetrachromatic women: http://www.post-gazette.com/pg/06256/721190-114.stm . I am not sure if these tests have been replicated, or whether the women are true tetrachromats, or simply more rhodopsin-aware or perhaps have a shifted peak for three receptors, or perhaps nothing at all.

@Ben Crowell made a correct point about “observation that the perceptual color space is three-dimensional”, but it needs some elaboration. How it might be evident to early theorists, such as J.W. von Goethe, that this space has dim ≥ 3? First of all, changes in the intensity of a light that preserve its “composition” (in modern terms, ratios between spectral densities) are a commonplace. Easily observable various forms of light attenuation induce a natural structure on the perceptual space: any point is connected with “ideal black” (means: no visible light) with a segment. In painting, points of such segment are called shades with respect to (non-black) endpoint, that are recognized by our vision as attenuated versions of “the same color”. Then, if we exclude black, the original perceptual space up to changes in intensity forms the chromaticity space. Mathematically speaking, it is the projectivization of original vector space: change of intensity = scalar multiplication. It is a manifold of one dimension less.

(but not necessarily with these given spectral colors at the endpoints).

But most people also contrast pure colors and tints (pale whitish/greyish colors). We see, in the chromaticity space, a color wheel with white/grey somewhere in the middle. Therefore we have no less than two dimensions for chromaticity, hence at least three dimensions in total.

Not the answer you're looking for? Browse other questions tagged visible-light biophysics wavelength vision or ask your own question.

8
What are colors?
3
Is it only red, green and blue that can make up any color through additive mixture?
2
Four questions on color
4
What, if anything, makes primary colours distinct?

3
Is it only red, green and blue that can make up any color through additive mixture?
2
Is there a one-to-one relationship between colour theories and our trichromatic vision?
10
Why does the additive color model use red, green and blue instead of yellow, green and violet?
2
If monochromatic light shines into our eyes, will that activate multiple types of cones or only one type of cone?