Bell in a vacuum, where does the sound energy go?

I'm not educated in physics, but I learned that a bell struck in a small vacuum chamber will not be heard by people around it (in a school science lab). If it had been surrounded by air, there would have been energy propagating outward from the bell in a sound wave. Because this can't happen, does the bell vibrate harder from the impact? Will it break sooner?

When a bell vibrates in air, it pushes air molecules out of the way which will make the vibrations "decay". If you strike a bell in vacuum, this loss mechanism will not be there so the bell will "ring" for longer (but nobody can hear it). This doesn't mean the initial amplitude is significantly greater - just that it persists longer. Obviously if you rang the bell repeatedly there is a small chance that the moments of impact would amplify the motion of the bell (resonance) but that's not really very likely. I would not expect the bell to break sooner. On the other hand, for an electrical bell the coils used in the mechanism will heat up, and they would normally be air cooled (not terribly efficient but still - it's a cooling mechanism). It is conceivable that an electrical bell operated continuously in a vacuum would burn out because the cooling is less than in air - but that's pure speculation.

Back to the question of damped vibration, a sketch of what this might look like (arbitrary units of time along the horizontal, and amplitude along the vertical axis): 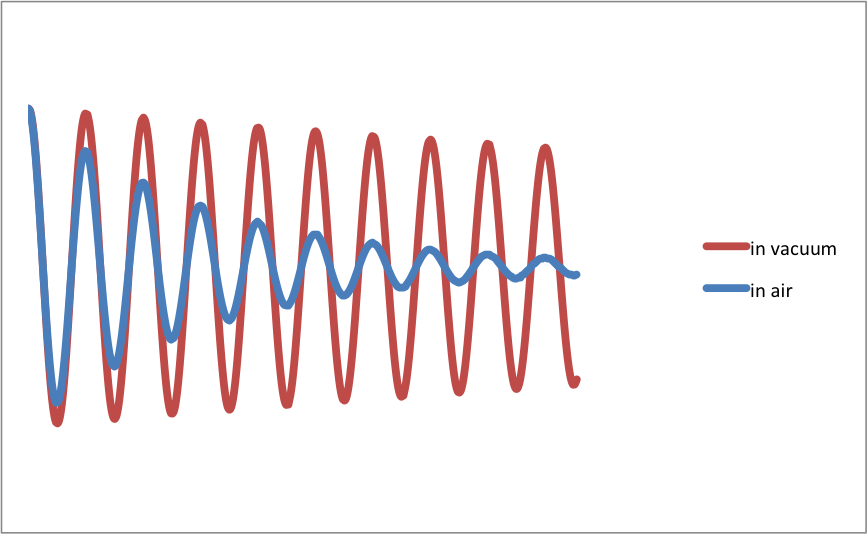 I am assuming there are "some" loss mechanisms for both - but at least one fewer for the bell in vacuum. The initial amplitude after being struck ought to be (very nearly) the same.

The bell will not vibrate harder, but will take much longer to decay. The chief dissipation mechanisms are air, bell suspension mount, and internal friction in the metal.

A well made bell's mount will be such that the fundamental vibrational mode of the bell does not produce much vibration or energy loss in the suspension point.

The internal friction of a metal bell will limit the quality factor to ~1000 and so the ringdown time will be approximately 3*freq_bell*Q.

Not the answer you're looking for? Browse other questions tagged acoustics vacuum or ask your own question.

2
If a bell is rung in a perfect vacuum and is suspended by opposing magnets will it ever stop ringing?

2
Is it possible to create a vacuum ballon using concentric partially pressured spheres?
14
Is it possible to create an audible sound source in mid air by intersecting ultrasonic sound beams?
2
Speed of sound in vacuum
1
Can you record sound through vacuum? Like this: (object)(vacuum)(object)
0
Sound wave in a Vacuum
2
When sound is cancelled in an acoustic duct, where does the energy go?
8
Intuitive Cause for End Corrections
2
What happens if a traveling sound wave encounters vacuum?
0
What is the property of sound that Allows it not to travel in vacuum?