Why isn't the time between apogee and perigee constant?

Does proximity of the moon/earth system to the Sun cause the moon to go faster along its orbit as well? The in-between times do not appear to increase during July/August (i.e. near Aphelion), so I guess that's not a contributing factor.

So, what is causing the moon to reach apogee/pedigee faster at one time and slower at other times?

edit: I've just found some info which may explain this phenomenon:

"The tidal effect of the Sun's gravitational field increases the eccentricity when the orbit's major axis is aligned with the Sun-Earth vector or, in other words, the Moon is full or new."

So, I would assume whenever the Moon is full or new, its orbit changes its shape to some extent, which causes the time spent between apogee and perigee to be inconstant. Am I correct? And is this the only reason?

If you use push the site you found, http://www.timeanddate.com/astronomy/moon/distance.html, to just beyond 2015, you'll see that only 24.69 days transpire between the last lunar perigee of 2015 and the first lunar perigee of 2016. That's almost three days less than the average value of 27.55455 days. There's something curious going on here!

Below is a plot of the times between successive perigees (red curve) and successive apogees (blue curve). Note that the perigean anomalistic month is subject to significantly greater variations than is the apogean anomalistic month. Also note that the two curves have the same frequency (about 7 months) but are almost 180 degrees out of phase. These variations are the direct cause of the phenomenon you observed. You'll see a marked difference between perigee-to-apogee versus apogee-to-perigee when the time from perigee to successive perigee is changing fastest. 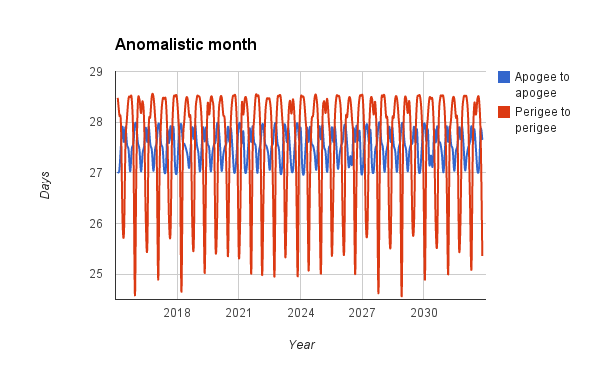 It's the Sun that makes these variations occur. The Sun makes the lunar apse line (the line from Earth to the Moon at perigee) precess. This, in combination with the way tidal forces themselves vary, makes the Moon's orbit more eccentric that normal when the lunar apse line (the line perigee to apogee) aligns with the syzygies (new moon or full moon), less eccentric than normal when the apse line is more or less orthogonal to the line from the Earth to the Sun. The perigean months are longest when perigee more or less coincides with a new or full moon, and shortest when perigee more or less coincides with the moon in its quarter phases.

The earth/moon system around the sun certainly changes speed as the earth gets closer to are farther from the sun, but the Earth/Moon orbit the sun together so the direct effect on the Moons orbit regarding the earth's Apogee and Perigee would probobly be small.

I think a larger effect is the tidal effects on the moon's orbit around the earth from the sun.

To look at the math, as simple as possible - when the earth is at it's closest point to the sun, about 91.4 million miles, it's orbital speed is the square root of the change in distance, so it's 1.7% closer, it's speed is about 0.9% faster, and similarly, about 0.9% slower at the furthest point, so, taking 67,000 MPH as the average speed, the earth's fastest orbital speed is about 67,600 MPH and it's slowest about 66,400 - about 1,200 MPH difference, But that effects the earth and moon mostly equally.

If we ignore the Earth's elliptical orbit and set the earth at precisely 93 million miles from the sun, the moon is closest to the sun during the New moon (93 million minus 240,000) and furthest during the full moon, 93 million plus 240,000 miles - so it's a variation of about 0.26% in each direction, 0.52 total percentage change, which is about 0.26% change in speed. 0.26% of 67,000 MPH is about 170 miles per hour, so that is the potential change in the Moon's speed in relation to the earth based entirely on what is essentially the solar tidal effect. The Moon's average orbital speed is 2,300 MPH around the earth, so plus 85 MPH in each direction from the solar tug. - That's enough to throw off the cycle a bit. Not nearly enough to knock it out of orbit (that would be about 41.4% plus on top of the 2,300 MPH to reach escape velocity), but it's enough to create a wobble in the orbit, and my math is probobly pretty rough on this point.

Something else to consider is that Apogee and Perigree operate (almost) on the Sidereal lunar month, or 27.32 days while the full and new moon operate on the Synodic Lunar Month (29.53 days), so the Apogee essentially catches up to the full moon about once a year. I would think that's where the Solar tidal force has a bigger effect, not based on the Earth's apogee, but on the relation between the Moon's apogee to the Moon's position around the earth (full, half, quarter, new, etc). That seems most logical to me anyway, but I'm not 100% sure.

anyway - that's my best shot at this question. Orbital Mechanics get pretty complicated with 3 bodies. With 2 bodies, then yes, I think they should be like clockwork.

Not the answer you're looking for? Browse other questions tagged orbital-motion solar-system moon celestial-mechanics or ask your own question.

1
Why does the distance at apogee and perigee of the moon change?

14
Mars just collided with Earth! A question of eccentricity
0
How do I calculate evection and variation for the moon in my simple solar system model?
0
How does the Sun's gravity affect the shape of the orbit of the Moon around the Earth?
2
Distance of the Moon Cycles
0
Are there any moons that exhibit a non-convex curvature in their orbit about the Sun?
0
Increasing the speed of satellite to raise an orbit