Radius of curvature of a lens 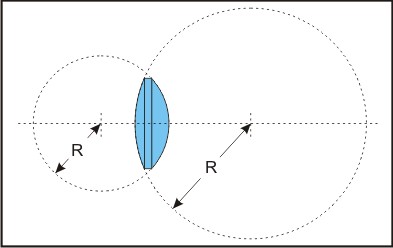 From this answer, I wish to make it abundantly clear to you that while one sphere can define two mirrors (concave and convex), it takes two spheres to define a lens.

In the case of a perfect concave or convex mirror, you can complete the sphere and by the definition of radius of curvature, the radius of the sphere is the same as that of the mirror. See figure below:

Now, in the case of lenses. Let us consider a common biconvex lense. The lense has two surfaces unlike a mirror which has only one. Each of these surfaces can be thought of as being a segment of a sphere as shown in the below figure: 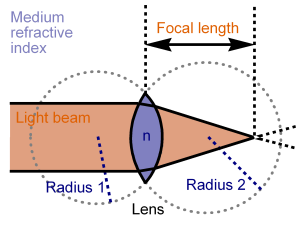 The figure shows that the lens surfaces are part of distinct spheres and hence each surface has unique radius. Similarly, you can imagine a biconcave lens being part of two spheres.

PS: It is interesting to note that from the lensmaker's formula, it found that for an asymmetrical thin lens, the focal length is proportional to the ratio between the product and sum of the radii: $$f\propto \frac{R_1\cdot R_2}{R_1 + R_2}$$

Not the answer you're looking for? Browse other questions tagged curvature lenses or ask your own question.

2
the power of a lens and radius of curvature relation
1
How many foci does a converging or diverging lens have?