If a rocket expels propellant at a velocity of $v_e$ decreasing its mass from $m_0$ to $m_1$, then according to the Tsiolkovsky rocket equation the change in velocity of the rocket ($\Delta v$) is:

Is there an intuitive way to understand why the dependence of $\Delta v$ on $\frac{m_0}{m_1}$ is logarithmic?

You asked for an intuitive answer.

A rocket accelerated by burning fuel and expelling the combustion products at high velocity. Conservation of momentum says that if you expel the same mass faster, you will get greater acceleration. This gives rise to the proportionality with $v_{cx}$.

As for the logarithmic part: if you imagine two rockets of mass $m$ that each burn half their total mass, they will reach a certain velocity. If they were tied together at the start you would have a rocket with mass $2m$ that loses half its mass and reaches the same velocity.

From this it should be easy to see that a rocket will accelerate by the same amount when it loses the same fraction of mass: going from $m$ to $m/2$ gives the same acceleration as going from $m/2$ to $m/4$, etcetera. This is the essence of a logarithmic progression.

Doing this with mathematics is not hard but I think the above helps get an intuitive feeling for the underlying physics.

But it is not quite equal, since as the rocket is burning fuel, it is getting lighter. This is why you also take into account the rate of change of the mass, $\ln(m_0/m)$.

So, how do we derive this?

We can start by giving some information about the rocket at $t$: it's flying with velocity $v$, and has mass $m+\Delta m$ (where $\Delta m$ is precisely the quantity of fuel that is going to be expelled between $t$ and $t+\Delta t$). For an observer on the ground (rest frame), the total momentum is $p(t)=(m+\Delta m)v$.

Now, at $t+\Delta t$, the velocity of the rocket has increased by $\Delta v$, and is now $v+\Delta v$. Similarly, the mass of the rocket has decreased to $m$, while a mass $\Delta m$ of fuel has been expelled with some velocity (negative, in the opposite direction) $v_{ex}$. Again, for an observer on the ground, the total momentum is $p(t+\Delta t)=m(v+\Delta v)-\Delta mv_{ex}$.

The basic question is how the speed of a rocket change. Since you are always expelling mass at a fixed velocity, with a given momentum, you must also gain that momentum yourself, so that it is conserved. Now assume that by some reason, even though you are expelling mass, your mass doesn't change. You are throwing mass with a fixed velocity, so your own velocity must increase proportionally ($v_{ex}$ dependence), but if you consider you are loosing mass as well, that velocity must increase even more to compensate for that. But how much is that "even more"? Proportionally to your own mass, you are loosing a higher percent of mass as time goes by, therefore your speed must increase faster as time goes by. So now there are a lot of functions that satisfy all that, but we need to make one more assumption: the larger your mass, the less the change in your mass matters, because it is proportionatelly very small.

So we need a function linear with $v_{ex}$, that increase faster and faster as we get closer to mass 0, but never gets negative (assymptote to the y axis), and changes little when the mass is really big. If you think about it, the exponential has those properties, but the other way around, it gets closer and closer to the x axis ($y=0$), without crossing it, and as y goes to infinity, the x value changes little. 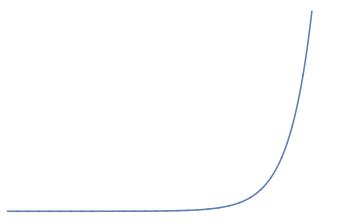 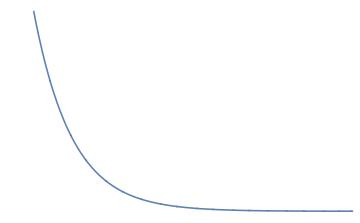 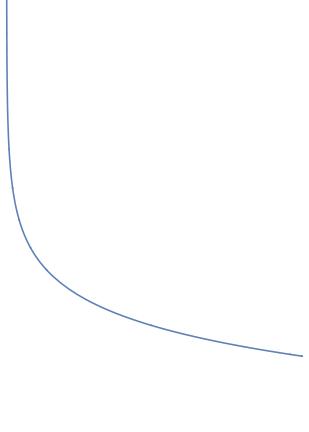 I don't know if that was clear, but I tried to give a completely intuitive approach to it. With no mathematical exactness.

Not the answer you're looking for? Browse other questions tagged newtonian-mechanics rocket-science propulsion or ask your own question.