Does the gravitational force of a massive, spherical body draw only towards its center of gravity, and to no other area?

Consider the premise that at the center of Earth (for example) an object would be weightless because of the relatively even distribution of mass surrounding it, and the resulting gravitational pull on all sides of the center. Also, consider that gravitational force weakens once an object is below the Earth's surface, as the mass from the sides and above exert gravity.

Now, for an object on the surface and above the Earth, is there not a gravitational pull from the “sides” as well, increasing in strength towards the center so that it FEELS LIKE it's only pulling from the center? Envision yourself standing on our planet, with a very wide conical shape of force extending from you to the horizon all around you increasing in strength towards the Earth's center. I believe you would be pulled in all these (infinite) directions but not notice as the forces cancel each other out, with the exception of the center. To help illustrate: if you stand beside Mount Everest, there should be a pull towards the mountain even if its too slight to notice.

The shell theorem ensures that the gravitational force of any spherically symmetric mass distribution acts towards the centre of mass. However, if spherical symmetry is broken, as in the example you quote, then indeed there can be other components to the gravitational force. For instance you can use Wolfram Alpha (for example) to tell you at what angle to the vertical the gravitational field is at any point on the Earth (not sure that the model is as detailed as accounting for mountains though).

You might out of historical interest look at the work of The Rev. Nevil Maskelyne who, in an effort to establish the mean density of the Earth, tried to measure the deviation of a plumbline from the vertical, either side of the highly symmetrical Scottish mountain Schiehallion (pronounced Shee-hallion).

Below is an image of the plaque in honour of Maskelyne, placed at the foot of Schiehallion. (I have climbed the mountain twice.)

Plaque to Maskelyne at the foot of Schiehallion 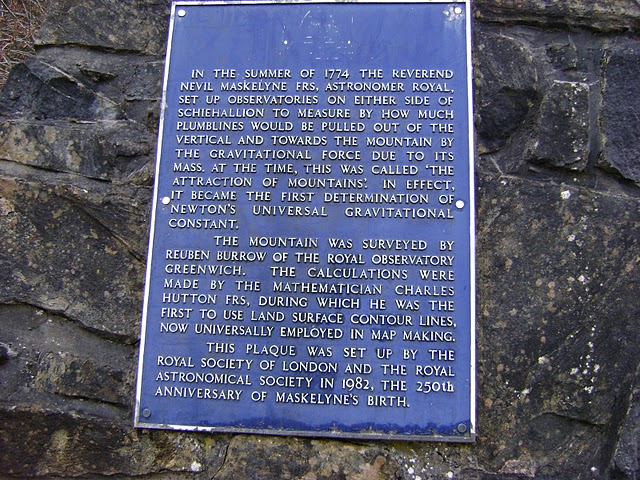 The classic view of Schiehallion across Loch Rannoch 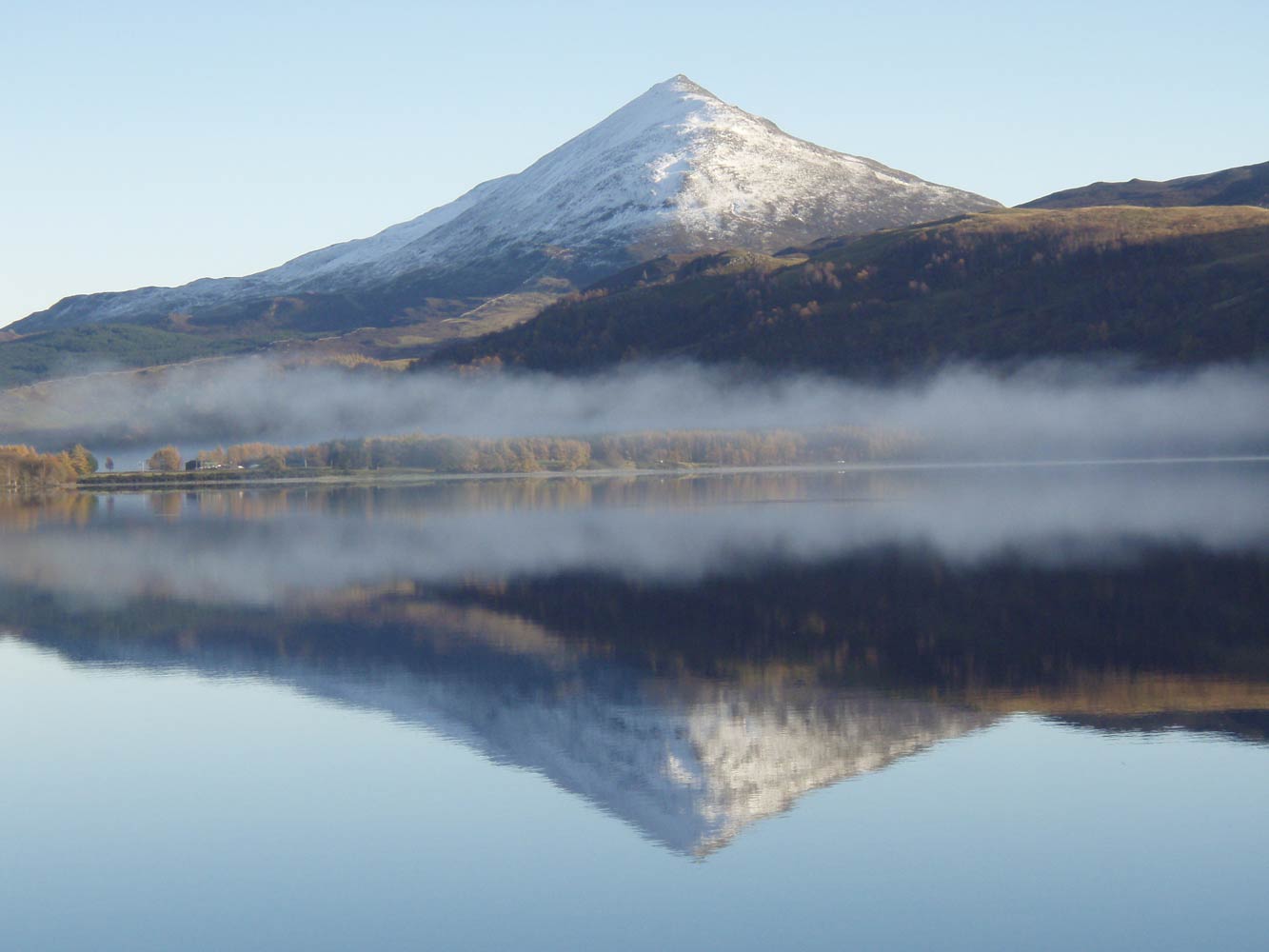 Does the gravitational force of a massive, spherical body draw only towards its center of gravity, and to no other area?

Yes. This is exactly what Newton's shell theorem says, and also Gauss' law of gravitation.

One key benefit of this discrepancy is that it enables sun synchronous satellite to exist. The Earth's equatorial bulge results in a torque on satellite orbits. Place a satellite in low Earth orbit just right and the orbital plane will precess so as to keep the Sun angle constant over the course of a year. This is extremely useful for Earth-observing satellites (e.g., weather satellites and spy satellites).

To help illustrate: if you stand beside Mount Everest, there should be a pull towards the mountain even if its too slight to notice.

Newton considered (but rejected) using a mountain as a way to estimate the mass of the Earth. He thought the deflection toward the mountain would be too small to measure. This turned out to not be the case; instrumentation improved drastically after Newton's time. This drastic improvement can be attributed largely to Newton himself.

Newton's idea would have been correct if the Earth was a uniformly dense object. What Newton didn't know is what makes mountains mountains. Mountains, like icebergs, are big chunks of less dense material floating on a sea of more dense material.

One of the more famous results in early post-Newton physics was the Schiehallion experiment. This experiment used the Scottish mountain of Schiehallion to weigh the Earth. The results were amazingly accurate given the time.

There's a good reason for this. Continental crust is less dense than oceanic crust, which in turn is less dense than upper mantle rock. Mountains are in a sense chunks of light material floating on a sea of dense material. As is the case with icebergs, there's a whole lot more iceberg (or mountain) beneath sea level than there is above sea level. This tends to make the deflection of the vertical much less than that that result from a uniform density Earth. This is particularly so with large mountain chains such as the Andes, the Alps, and the Himalaya.

Not the answer you're looking for? Browse other questions tagged newtonian-gravity or ask your own question.

0
Why can center of mass be used in calculating gravity?

1
Weightlessness for astronauts
5
What is the reasoning behind the Hill Sphere?
4
How noticeable is the gravitational pull of a mountain range?
2
The source of energy for movement of techtonic plates
9
Difference between Free Fall and Constant Velocity
0
Why do objects weigh less the further from Earth's center?
0
What adjustments are needed to use Newton's Law of Universal Gravity to calculate the force between me and Earth?