Pulling a bar through a magnetic field

This is a question on magnetic flux and induced voltage. I believe that this problem's answer key is incorrect, and I want to determine whether my opinion is sound. I also want to explore one sub-question of the problem. 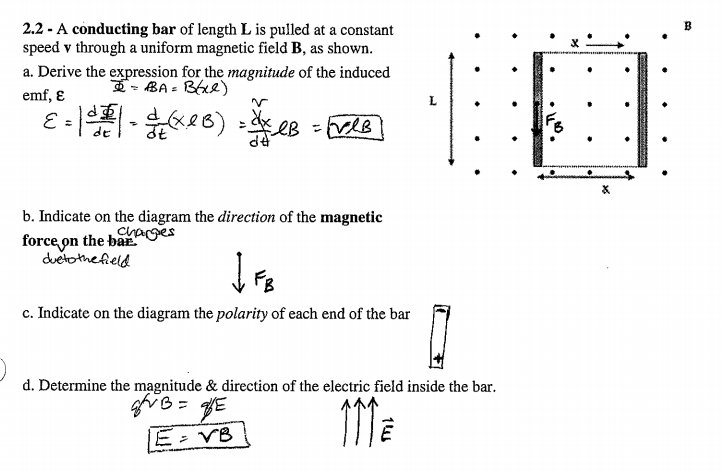 To have flux, you do need an area. The area does not need to be enclosed by a wire, however if you have a thin wire, and mobile charges are confined to flow through the wire, then you can relate the change in flux to the emf due to the lorentz force (magnetic and electric) per unit charge in the direction of the instantaneous direction of the wire. So flux exists for any area, but it might not be useful or related to anything.

In your case you have a conducting bar, so I don't see any natural area (unless you give your bar some thickness). And even if you give your bar thickness, then you no longer can equate the emf to a changing flux, that result only holds for thin wires.

But you can move a conductor through a magnetic field, and it will experience a magnetic force. The protons and bound electrons feel a force, the net force on those will be in the opposite direction of the force the mobile electrons feel, and the net effect of those net forces will be to strain the solid lattice due to the stress, so your bar might deform ever so sightly. The mobile charges however will start to accumulate on end (and leave a deficit on the other end). Eventually the charge imbalance will counteract the magnetic force and equilibrium will be achieved. That's part b,c, and d which all look fine (though note that the direction of the magnetic force listed as pointing down is really the direction of the magnetic force per unit charge, but that's fine, it is supposed to counterbalance the electric field which points in the direction of force per unit charge). Part a is not OK, but for that you can instead find the magnetic force as $q\vec v\times \vec B$ and then get a force per unit charge as $v\times \vec B$, also this is only a first approximation, the charges don't move exactly at $\vec v$ moving the the right, when there is a current they also have some motion up an down. For a thin wire there are forces keeping the charge inside the wire and they can (potentially) counter balance any force other in a direction other than the up and down force.

Your question 2 makes no sense whatsoever to me, I see no factor of 2.

Not the answer you're looking for? Browse other questions tagged homework-and-exercises electromagnetism magnetic-fields induction or ask your own question.

2
Why does induced current depend on the area of a loop of wire?
2
Confusion about induced emf vs motional emf
0
How can a magnetic field exist outside a capacitor where the electric flux is not changing?
2
Why is the change in flux in Faradays law proportional to the area enclosed by the wire rather than the wire area perpendicular to the magnetic field?
0
Magnetic Field and Electric Feild Confused
3
Can $F=qvB$ be applied to a solenoid and a parallel moving magnet?
0
Subarea within a changing magnetic flux?