Why does the non-linearity of the string action prohibit stretching due to strong excitations?

To understand hadronic particles as excited states of strings, we have to study the dynamical properties of these strings, and then quantize the theory. At first sight, this seems to be straightforward. We have a string with mass per unit of length $T$ and a tension force which is also $T$. Think of an infinite string stretching in the $z$-direction. The transverse excitation is described by a vector $x^{\text{tr}}(z,t)$ in the $x y$-direction, and the excitations move with the speed of sound, here equal to the speed of light, in the positive and negative $z$-direction. This is nothing but a two-component massless field theory in one space-, one time-dimension. Quantizing that should not be a problem. Yet it is a non-linear field theory; if the string is strongly excited, it no longer stretches in the $z$-direction, and other tiny excitations then move in the $z$-direction slower. Strings could indeed reorient themselves in any direction; to handle that case, a more powerful scheme is needed.

You've probably since received more clarity on this question, but it was bumped up by the community user and neither of the existing answers is quite right.

't Hooft was not intending to mean anything very complicated by this remark. He was just saying that if you have a string in the $z$ direction and consider only the smallest transverse vibrations, you can describe this field theory as the two fields $x(z, t)$ and $y(z, t)$ under an assumption that all of the "stretch" of the string happens in the $z$-direction.

However, if you strongly excite the string, then the string force is still linear in the stretch, but as you come away from the $x=0, y=0$ location, that stretch is no longer directed mostly in the $z$-direction, which means that using $z$ as your field theory parameter induces nonlinearities in the resulting field equations; it's not just a $z^2$ term. To put it really concretely, if the string makes an angle $\theta$ with the z-axis then the actual stretch of the string is $d\ell = dz/\cos\theta,$ and so we have to consider successive approximations $dz~\left(1 + \frac12 \theta^2 + \frac5{24} \theta^4 + \dots\right)$ with $\theta$ being some complicated expression depending on $x$ and $y$, one big mess.

In fact the situation is even worse because one can imagine excitations which stretch the string out so much they can twist a loop into it! This is what he means by worrying about how a string can reorient itself: the $x(z, t)$ and $y(z, t)$ fields might have to become multivalued functions of their input parameters or worse.

So what we're quantizing (if we try to perform the procedure he's describing) is going to only be some small-energy approximation of a nonlinear theory which we know would be "a hopeless task" to solve properly.

You can think of a solution describing rotating string with finite length, the existence of which is based on the nonlinear aspect of EOM, contrast to other linear equations. More generally the strings can move as arbitrarily as they like, relating to variant of initial conditions and boundary conditions. Similar for the infinite length string t'Hooft discusses. This is acturally little with quantizations since you should solve this EOM firstly. Then t'Hooft comments that this is indeed a solvable model for the enormous ammounts of conformal transformations, for example the rotating string can be gauged to a stationary string.

Maybe you're overthinking this one. Find a washing line or a guitar string, and twang it. As you do, look carefully. The string started off straight, but as you were about to let go, it was stretched. The string is elastic, like the bag model, and it has an elastic limit. Twang too hard and it breaks. That's non-linear. Also note that the speed of a shear wave in a bulk is v = √(G/ρ) where G is the shear modulus of elasticity, and ρ is the density. When you stretch and compress a material, these can change.

Because we have waves in this simplistic model? See the picture below. The string starts straight, it's stretched as you twang it, then you get a wave in it. Because the wave is there, a section of the string is reoriented, and if you sent another tiny wave along it from left to right, it is displaced, it takes a curved path. 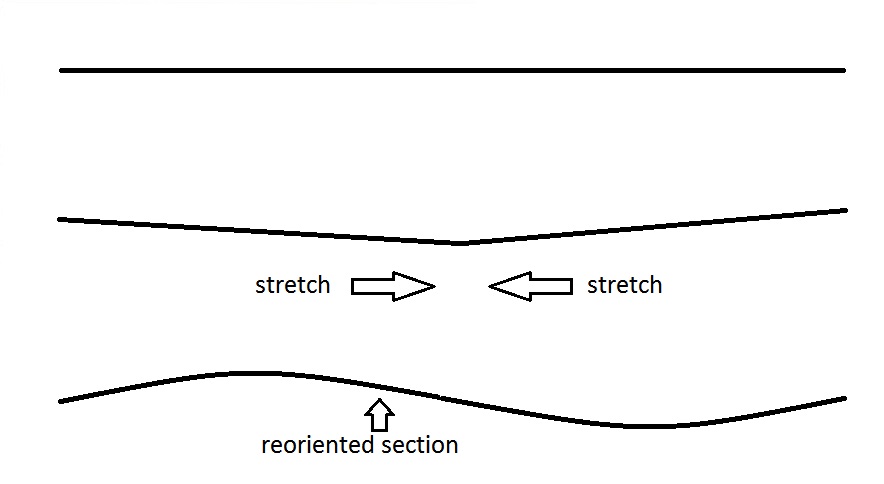 This path can be so curved that the wave ends up travelling through itself such that it displaces its own path into a closed path. However the fixed-ends washing-line analogy then breaks down. There is no actual washing line or open string or closed string, what we're really dealing with is waves in space. By the by, I think the linear wave is best likened to the E=hc/λ photon, and the wave in a closed chiral Dirac's belt "spinor" path likened to the electron. We can diffract electrons. In atomic orbitals electrons "exist as standing waves". 't Hooft mentions the photon on page 25, but there's no mention of electrons or leptons. He does however mention neutrinos. Grip your washing line with a pair of pliers, twist it anticlockwise, then let go: antineutrino!

Not the answer you're looking for? Browse other questions tagged quantum-field-theory string-theory action non-linear-systems or ask your own question.

3
Questions on string theory vacuum and quantizing gravity
3
Must string models that describe 4d effective field theories always have D-branes that extend in the 4 non-compact spacetime dimensions?
2
Can the strings in string theory be thought of as troughs in a field?
1
Light-cone coordinates to quantize strings?
6
How are strings of String theory different from particles in quantum field theory?
8
If Particles are simply excitations in a field, how does string theory change this description
8
Is the String Field of String Field Theory the same (ontologically identical to) as the field of QFT?