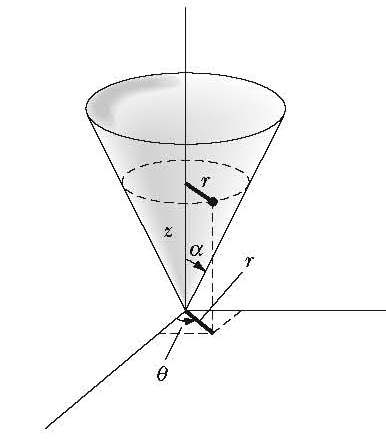 So I'm really stumped with this. I have a particle in a cone, like pictured. The particle orbits the z axis on the dotted line for $r$.

Can anyone check me? I get really confused on polar coordinates.

In general, when working out the Lagrangian, start in coordinates that you know and then rewrite in generalized coordinates. Kinetic energy in this case is proportional to $v^2 = \dot x^2 + \dot y^2 + \dot v_z^2$. In your spherical coordinates $$x = r \sin \alpha \cos \theta;~ y = r \sin \alpha \sin \theta;~ z = r \cos \alpha.$$ Take full time derivatives of each of these, write them with $\dot r$ and $\dot \theta$, plug them into the above equation, and simplify, simplify, simplify.

For Lagrangian mechanics it is so important to start from a correct Lagrangian that when you are working it out you do not want to be hand-waving about the expressions involved. Do this extra work. It is not that much and you will often be surprised by interesting terms. Do not settle for a guess as guessing a Lagrangian is exactly like guessing an answer, except with no principles to fall back on to verify that answer if it is wrong.

The kinetic energy of the particle depends just on the path it is following - if you imagine the cone is suddenly invisible, the particle continues to go around in a circle. That means that there is no reason to add $\sin\theta$ in your expression for the kinetic energy if you used $r$ to mean (as drawn) the distance from the axis of rotation.

Note - your drawing implies you are using a cylindrical coordinate system. If you were using a polar system (as your question implies, but not what your drew), then the distance from the origin (of the cone) to the particle would be $r$ and the distance to the axis would indeed be $r\sin\theta$.

Is it possible that this is the source of your confusion?

Not the answer you're looking for? Browse other questions tagged homework-and-exercises classical-mechanics lagrangian-formalism potential-energy or ask your own question.