What is meant by phase, phase difference, in (and out of) phase in wave terminology?

In the equation $y=\textrm{sin}(\omega t+ \phi)$ $\omega$ is the angular frequency of the oscillator, and $\phi$ is the phase angle. Let's start with the most basic version of this equation, and then build back up to the most general case.

If we set $\omega=1$ and $\phi=0$ then we are left with $y=\textrm{sin}(t)$ which in the basic sine function. If we were to graph this equation, we would see that the function has a period of $2\pi$, that is, the graph "repeats itself" every $2\pi$ along the horizontal (here defined to be $t$) axis. But what if we want our wave to be more compressed or squished together, so that it repeats more often? We could increase $\omega$ so that it is greater than 1. If, for example, we set $\omega=2$, the wave will repeat itself twice as often, or take half the time along the $t$-axis to repeat. If we set $\omega=2$ the period would be every $\pi$ instead of $2\pi$. If we wanted to do the opposite, and stretch out our sine wave, we could set $\omega$ to some number less than 1. If we set $\omega=\frac{1}{2}$ then the wave would have a period of $4\pi$

Ok, so that above paragraph told me how to stretch or squeeze my wave, by changing the frequency/period (they're inversely proportional). But what if I wanted to slide my wave along the horizontal $t$-axis without actually changing the frequency or period? That's where the phase angle $\phi$ comes in. Take a look at the picture below: 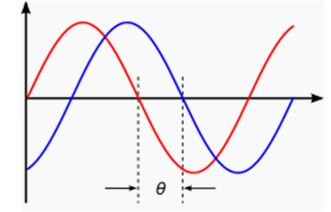 In this picture, the red and blue sine waves both have the same frequency and period, but the blue one appears "slid" to the right by some amount. We describe this offset by the phase angle $\phi$. You may wonder what sense it makes to talk about an angle when we are looking at a horizontal offset, but remember what the sine function does. When the time $t$ has been multiplied by the angular frequency $\omega$, our sine function is taking an angle in radians as an input, and giving a displacement $y$. So even though on the graph $\phi$ appears as a horizontal "slide" in the original equation is it "sliding" the angle $\omega t$.

Similarly, out of phase is when the function is not in phase.

As for the last part of your question, there isn't any reason why you can't enter the value of $\omega t + \phi$ into $\sin(x)$. If our, say spring's motion, has a period of 1 second, then from maths:

Since the graph of sin function is identical to that of a sin wave, I know why the sine function is used in the wave equation

The only thing a phase angle does is to shift the starting point. If a phase angle is added, then at time $t=0$ you have a sine function that is not zero $y=\sin(\omega 0+\phi)=\sin(\phi)$.

I am going to elaborate good answers given above in layman terms. To understand waves, we should understand simple harmonic motion(SHM) first. It is a type of to and fro periodic motion. Velocity and thereby kinetic energy of object undergoing SHM is nil at two extreme positions and maximum at mean position. Potential energy is maximum at extreme positions and nil at mean position. So, it can be thought of as conversion of two forms of energy in pace of time. Motion of pendulum is a example of SHM. The motion is so uniform (continuous in mathematics)that it follows precise mathematical model i.e. sin function.

Projection of uniform circular motion along it's diameter was studied by mathematicians and it was obviously a sin function. Amazingly, it exactly matched with motion of simple pendulum. You can set simple pendulum into motion, note it's period then you can calculate displacement from mean position at any point of time fitting values in 'motion of diameter projection of circle' formula.

Due to similarity of diameter projection, to and fro motion of simple pendulum is sin function.

Now, come to waves part. Waves transfer energy by oscillation of medium. Medium oscillates exactly like simple pendulum. Wave function is composed of two parts. Amplitude function and phase function multiplied together. First is amplitude part. It is constant, so no need to consider as function of any variable. Maximum displacement(extreme point)from mean position is called amplitude (A) which is multiplied ahead of sine function. Second is phase part. Phase ranges from -1 to +1. You can make analogy of phase part with unit vector which provides direction with magnitude of 1. Omegatime means angular velocitytime. Angular velocity remains constant. So, the only variable is time.

I explain phase difference now. Suppose two particles represent two separate parallel sound waves.One is in mean position and other is in extreme position.So, there will be 180 degree phase difference if we project it into circle. Their energy(Kinetic energy of first and potential energy of second) get subtracted. Conversely if both are at mean position or both at extreme position, energy gets added. You can imagine in between the extremes. Note that omega*time is angle and fi is also angle. So two angles can be added.

Not the answer you're looking for? Browse other questions tagged waves terminology or ask your own question.

3
What is the difference in the uses of $\omega t$ and $kx$ in wave equation?

3
What is the difference in the uses of $\omega t$ and $kx$ in wave equation?
0
How to derive the phase difference of a standing wave?
0
What is the name of $(ωt+\varphi)$ in sine wave?
1
Does "phase" in physics always have to expressed in radians or degrees?
4
How to calculate the phase and group velocity of a superposition of sine waves with different speed and wavelength?
2
Phase difference of a standing wave
0
How do we define phase difference between waves travelling in opposite directions?
1
Making sense of discussion about equivalent waves with varying phases