Existence of gusts of wind, an anomaly?

Enthusiast + Student, not a pro, so pardon my ignorance.

How can wind possibly flow in gusts?

The way I understand it, a gust is a pocket of air which hits you at slightly higher speed.

But how can these "pocket" thingy maintain its boundary, I mean why doesn't it just diffuse or maybe decompress to ambient preassure - doesn't it disagree with thermodynamics

I thnk the answer to this lies in 'Chaos Theory', which can also be described as non-linear dynamics.

To give an example of a simple linear system - if you want to travel from the West Coast of the USA to the East Coast of the USA by car travelling at an average speed of 60 miles per hour for 12 hours driving a day you can make a prediction of how long the journey will take. If instead when the journey takes place you average instead 55 or 65 miles an hour the arrival time will change a bit, but not that much.

In non-linear dynamics small changes can lead to huge changes - even completely different behaviour. So consider, for example, water flowing down a river. If it is flowing slowly it is reasonnably predictable as to how it flows, but as the rate of flow increases you can get 'turbulence', little whirl pools or 'eddies' form in the water and the flow becomes more complicated. When a river flows really fast then the flow will change again.

So to come back to the question - I think the wind blowing in gusts is a little like turbulent flow of water down a river. If the wind is very light you might get a steady gentle breeze, but with stronger winds the way the air flows can be more unpredictable. Hope this is helpful.

Picture of an Eddy in a river 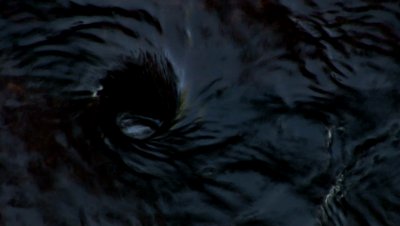 Thermodynamics gives us information about what is possible and what is not possible. For example, it tells us that a stone will not fall upwards and rush to the top of a mountain, but if a stone is pushed from the top of a mountain it could roll down all the way to the bottom. Thermodynamics does not tell us anything about how the stone would roll down and whether it would go faster at one point or slower at another. The progress down the mountain will of course depend on lots of factors, such as the path the stone takes.

I will first elaborate what wind-gusts are not, for mental clarification:

Thermodynamics as you may have encountered it in a physics course, is a static theory, as opposed to dynamic theories.
More specificly that what is taught at university is usually equilibrium thermodynamics - You calculate the equilibrium state of a system where it will end up, but you have no idea how it will do this.

Ignoring the way of how the system achieves an equilibrium state is fine e.e. for gases that do work in machines, as the microscopic energy exchange timescales are small enough (or you could say equivalently: $dQ$ is very small compared to other forms of work). This way you can describe a dynamic process like adiabatic-work with a static theory, so actually historically engineers were pretty lucky.

The work you've linked to (thermodynamics of diffusion) now will surely use concepts of non-equilibrium thermodynamics: when $dQ$ cannot be any longer neglected, but is still small you can approximate the way to equilibrium with energy fluxes that are gradients of the equilibrium variables $F = c \nabla X$ and with linear evolution $\partial_t X = \nabla F$.

However if we have arbitrary energy and also momentum fluxes, equilibrium thermodynamics can't help you anymore (afaik). Then 'nature' will do other stuff, stuff that we can understand with the theory of Fluid dynamics, that has the navier-stokes-equations very central to them.

Wind generally is generated by differences in heating, so again we will have fluxes in energy and momentum. So referring to your question, wind is the attempt of energy to equilibrate, but at huge energy differences. At small differences it would simply diffuse.

And Wind gusts are now nonlinear or 'chaotic' solutions to the fluid equations (as @tom pointed out).

Addendum: After reading some more through the Wikipedia-article on non-equilibrium thermodynamics I see that there is considerable research on how to generalize non-equilibrium phenomena with extremal principles. The extremal principle for equilibrium-thermodynamics is simply the minimization of entropy production, but there is no consensus yet on the rest.
So actually, your question touches really recent theoretical research.

Not the answer you're looking for? Browse other questions tagged thermodynamics pressure diffusion or ask your own question.

1
what property of steam makes it the preferable motive fluid in jet ejectors? why not air or nitrogen?