Energy is actually the momentum in the direction of time?

By comparatively examining the operators 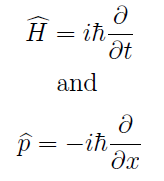 a student concludes that `Energy is actually the momentum in the direction of time.' Is this student right? Could he be wrong?

It's analogous in two ways that I can think of off the top of my head:

I wouldn't call it "momentum in the direction of time" because that phrase, at least to me, implies that energy is more momentum-like than it really is.

Energy is very momentum-like in Relativity theory. For a photon, which has zero rest mass, its energy is the absolute value of its momentum. But not for the reason your student puts forward. What your student said has to be reinterpreted quite a bit.

The first technicality, and it is important, is that $H$ does not equal the operator the student wrote down. In QM, $i\partial\over \partial t$ is not an operator. Whenever you say « operator », you have to be clear in your mind on what space are you operating? The Hamiltonian is an operator in the space of functions of $x$, such as $e^{-x^2}$. An example of $H$ is what was suggested in one of the comments, $-{\partial^2\over\partial x^2}$.
Obviously if you apply your students operator to $e^{-x^2}$, you get zero.

What your student is getting confused by is the difference between a parameter and a variable. The time-dependent Schroedinger equation is better written this way: if $\psi_t(x)$ is the wave function of a system at time t, then it satisfies $$i{d\psi_t\over dt}= H\cdot \psi_t$$ and $\psi_t$ is being treated like a vector which moves with time, so a path in space. For example, $\psi_t (x) = e^{-{x^2\over t}}$ which describes a path which does not satisfy this equation.

But what your student is getting right is the idea that since in relativity time is analogous to space, then motion along the path ought to be analogous to motion in space. The value of any $f(x+a)$ can be found by Taylor's theorem from the value at $f(x)$ and all its derivatives, and this calculus fact can be rewritten in operator terms as $$f(x+a)=e^{a{\partial\over\partial x}}\cdot f.$$ Since this translation in space of a wave function uses the momentum operator of QM in the same way as Schroedinger's equation for time-translation along the path of the wave function uses the operator $H$, (the correct one, not the student's one), the Hamiltonian, which is the energy, we have

translation in space <-----> exponentiation of the momentum operator

translation in time <-----> exponentiation of the energy operator

and so from this we can draw the conclusion that energy is the time-component of momentum.

Here is another way of looking at it, using classical mechanics:

These are the original equations of motion for $(q,p)$ in addition to two extra equations. If we recall that in Hamiltonian mechanics $\dot{E} = \partial H/\partial t$, we see the following: The extended system has the energy of the original system as a degree of freedom $E(t) = q_e(t)$, and time as well: $t = p_e$.

In this way, it is natural to think of time as the conjugate of energy.

So yes, even if the wording of the student was imprecise, time and energy are conjugate variables.

Not the answer you're looking for? Browse other questions tagged quantum-mechanics energy time momentum operators or ask your own question.

79
Why can't $ i\hbar\frac{\partial}{\partial t}$ be considered the Hamiltonian operator?
1
Need verification if this simple derivation of the Schrödinger equation is valid
0
Definition of Hamiltonian in Quantum Mechanics

1
Connection between momentum and energy
2
Measuring position and momentum at the same time?
5
What is the origin of the quantum operators for $p$ and $E$ in standard QM?
1
Derivation of the radial momentum operator
2
Momentum and energy as a function of time
2
What is a “Time-like” direction?
4
Do position operators commute at different time?
3
Example of Heisenberg Uncertainty Principle (energy & time)
0
Can a momentum with no direction have size?