How to calculate the increased pressure drop due to a restriction?

Now, assume I've added a restriction in the middle of that pipe, which takes the form of another pipe with a smaller diameter D2 and a length L. 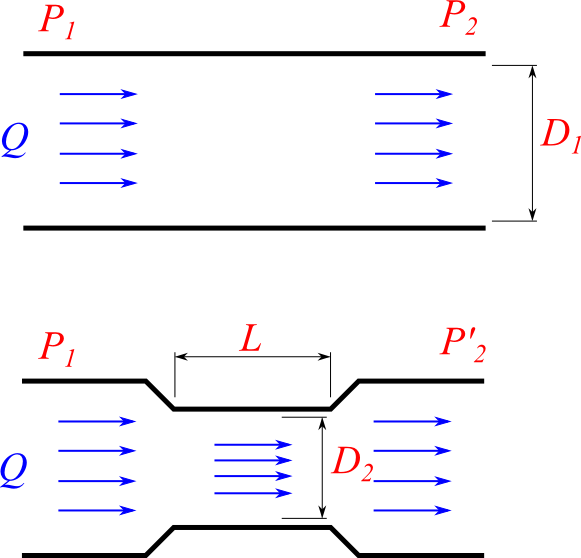 If we consider an inviscid, isentropic, incompressible flow, the total pressure in the flow is constant along streamlines (and since all streamlines originate from the same source, it is also constant throughout the flow). This means $P_0 = P + 1/2 \rho U^2 = \text{const}$. We also know that $\rho_1 U_1 A_1 = \rho_2 U_2 A_2$ for any positions 1 and 2 where $\rho$ is the density, $U$ is the velocity and $A$ is the area of the pipe.

So, we know density is the same because it is incompressible. We know $A_{inlet} = A_{outlet}$ because the pipe is the same diameter away from the contraction. Therefore, the velocities are the same $U_1 = U_2$. And since the total pressure is constant, the values of $P_2$ and $P_2^\prime$ must be the same also.

This is probably counter-intuitive. You would expect something to be different. And in a real fluid, it very well likely would be. Turbulence, separation, friction, heating, all kinds of losses will add up to have an influence. But in an ideal world where none of those things happen, there is no effect of the contraction away from the contraction.

3
Does pressure drop across pipe affect flow rate?
1
Compute pipe restriction from water flow and static pressure
3
What determines the dominant pressure-flow relationship for a gas across a flow restriction?
0
How to calculate the flow rate?
0
Pressure differentials either side of a restriction