What is the process by which the density fluctuations that were detected in the CMB evolved into the first stars?

We can detect very slight fluctuations in the temperature (mass distribution) when the CMB was released (decoupling). It is believed that these fluctuations led to the first stars.

However, these hot spots are much to large to have formed directly into stars, correct?

What were the events between decoupling at 380,000 years and the formation of the first stars at 50-200 million years?

I am reading this article about it: http://www.astro.yale.edu/larson/papers/SciAm04.pdf

Although the early universe was remarkably smooth, the background radiation shows evidence of small-scale density fluctuations—clumps in the primordial soup. These clumps would gradually evolve into gravitationally bound structures. Smaller systems would form first and then merge into larger agglomerations. The denser regions would take the form of a network of filaments, and the first starforming systems—small protogalaxies— would coalesce at the nodes of this network. In a similar way, the protogalaxies would then merge to form galaxies, and the galaxies would congregate into galaxy clusters. The process is ongoing: although galaxy formation is now mostly complete, galaxies are still assembling into clusters, which are in turn aggregating into a vast filamentary network that stretches across the universe.

This is a bit over my head though, what does it mean by "network of filaments", for example?

If the mass distribution of the universe had been perfectly uniform, there would be no net gravitational force on anything because an equal amount of mass in all directions would have a net cancelling effect. However, when you have over- and under-densities, the unequal distribution allows for there to be local centers of gravity. Remember that gravity travels at the speed of light. Also remember that inflation (which happened long before recombination) increased the universe in size by a factor of about $e^{60}$ in $10^{-34}s$. So pretty much the only things an object could feel a gravitational force from after that were those that were within the radius that light could have travelled after inflation. This means that at $380,000$ years, only things up to about $380,000$ light years away could have any influence on something (That's a region a few galaxies across). If these small regions happened to have more mass clumped in one area than another (they could be on one side of the "hill" of one of the large over-densities seen in the CMB, for example), matter would gravitate towards those centers. Obviously, the matter within a few light years would reach the gravity centers before the matter thousands of light years away, so what you find is that small bodies began to form in the over-dense regions.

These first small bodies may not have had enough mass to collapse into stars, but as time went on and the gravitational sphere of influence extended outward, they at least formed local cores within larger over-dense regions. As more matter fell into each system (and some bodies would also fall together and become one), eventually they became big enough to form stars.

The formation of the first stars at 50 million years also meant that now the influence of gravity extended even further, to over 50 million light years. With this, larger patterns in the density of matter emerged; the center of gravity of an overdense region would shift in some cases. This means that the stars and other bodies also began to fall together around these centers and form stellar systems.

As time goes on, this process continues with the gravitational influence extending further and further, revealing more and more of the shape of the over- and under-densities in the matter distribution to the objects inside them. Stars and basic groups of stars fell together to form protogalaxies ("proto-" can translate as "baby"). Protogalaxies eventually fell together to form galaxies, which then formed galaxy clusters, superclusters and (at what is currently the largest scale) galactic filaments.

Of course, don't get the idea that it's just Hydrogen and Helium floating around that caused all the gravity to make the first stars fall together. Dark matter was extremely important. It provided most of the mass in over-densities and really and truly is the seed for the gravitational collapse into all the interesting objects that came after.

So to answer your questions, gravity made the first stars form after recombination. And you're right, the hot spots in the CMB are too large to have formed directly into stars, but thankfully gravity isn't instantaneous and it travels at the speed of light, only small regions could communicate with each other at first, which allowed small objects to form first and allowed stars to form as the gravitational influence extended outwards. Thus, small-scale structures formed before large-scale ones and the many gravitationally bound structures we see in the universe today were able to naturally form.

The fluctuations that are seen in the CMB are spatially too large to collapse into stars. They are the protoclusters and proto-superclusters of our universe. However, the amplitude of the CMB fluctuations is not large enough for them to gravitationally coagulate into the clusters and galaxies we see today at all. (Cold) dark matter is essential in this process. It was decoupled from the radiation field and thermal pressure of the early universe and so was able to begin the process of structure formation far earlier than baryonic matter. The clusters and galaxies fall into the pre-existing gravitational potential wells formed by the dark matter. It is this process that is described by a filamentary collapse - this picture from numerical simulations (found at http://www.mpa-garching.mpg.de/galform/virgo/millennium/index.shtml ) shows that this process has begun at redshifts of about 20, when the first star formation may have begun. 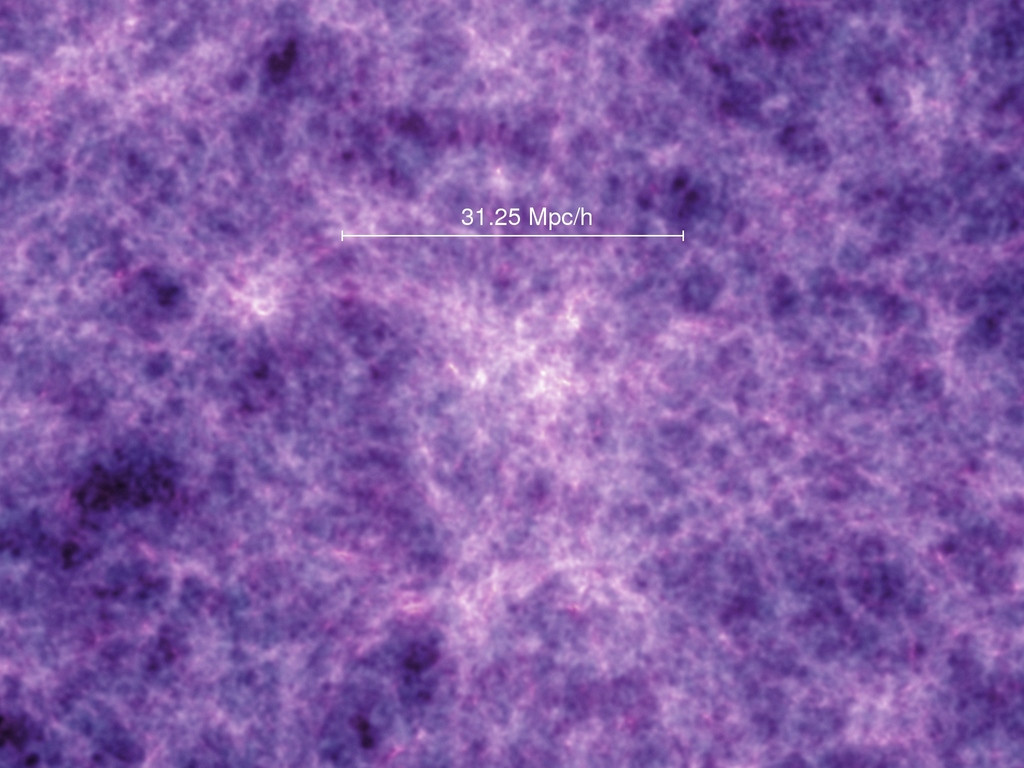 From there it is a question of getting enough matter together in one place for it to become gravitationally unstable to further collapse. The key quantity is the Jeans mass which is proportional to $T^{3/2} \rho^{-1/2}$. Gas clouds more massive than the Jean's mass will tend to contract and if they can cool and remain isothermal, then as they collapse the density rises and the Jeans mass becomes smaller - the cloud can fragment into a cluster of protostars.

For the Jeans mass to reach stellar sizes, then for a given temperature this implies that the density needs to rise to some particular value. It is this that will trigger the formation of the first stars, sometime around 50-100 million years after the big bang (it is thought).

Not the answer you're looking for? Browse other questions tagged cosmology stars cosmic-microwave-background stellar-evolution or ask your own question.

5
Population I and II stars
16
Fate of largest scale structures?
6
Correlation between large-scale galaxy structure and CMB fluctuations?
6
How can a black hole zap a galaxy into existence?
1
Why has the amount of star formation in the Universe decreased over time?
7
What is the limit for the size of a galaxy?
6
How is it that we can detect CMB radiation but not the first stars and galaxies despite CMB originating from before the first stars were born?
0
Is it likely that galaxy supercluster attractors are all supermassive blackholes?