I have a dissectible transformer, made up of two 120-turn coils. I connect a function generator to the primary side, set the AC voltage to be constantly 10V, and short circuit the secondary side. And as I vary the input frequency, and measure the power reading on the primary side, I have the following graph of power against frequency: 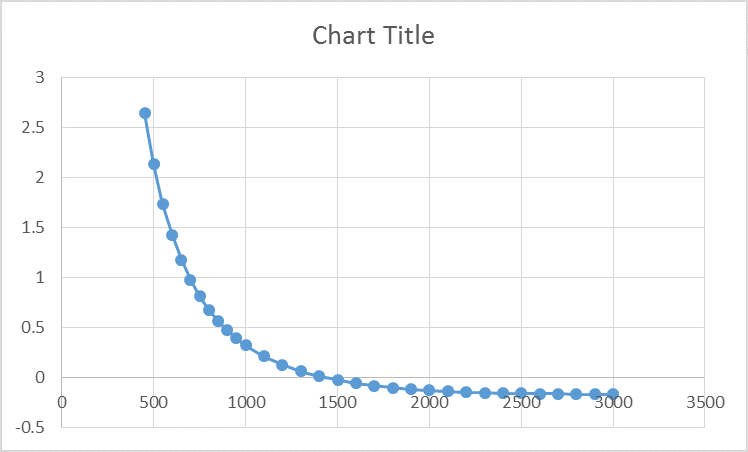 So what is happening? 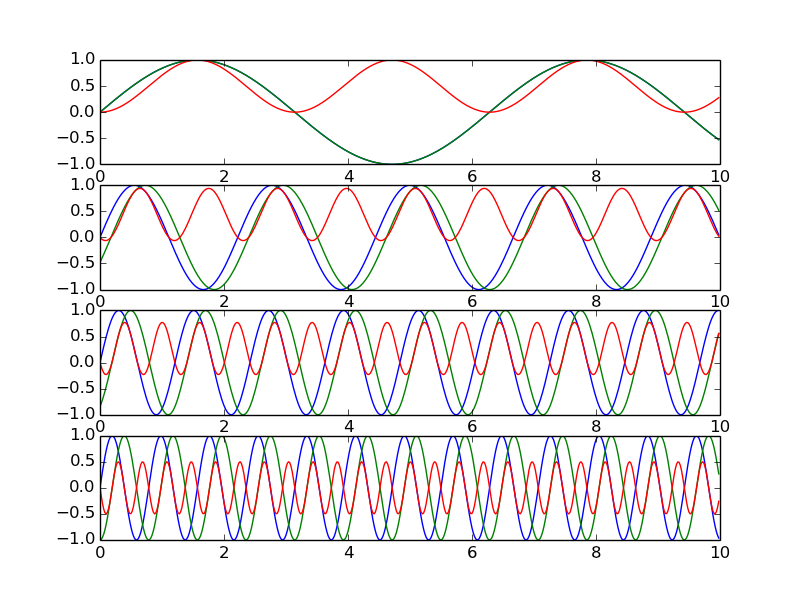 As you can see, for an inductive load like the shorted transformer, you expect power to flow in and out depending on the phase (depending on whether you are storing energy in the magnetic field to increase it, or whether the magnetic field is decreasing and giving energy back). The average of the red curve becomes lower as the frequency goes up - because the phase difference becomes larger. It is conceivable that your method for sampling the voltage and current is catching the negative values more often for the high frequency. But you will find the transformer getting warm - a sign that some power is being dissipated.

We can model the circuit (with the series resistor) as an inductor in series with a resistor: 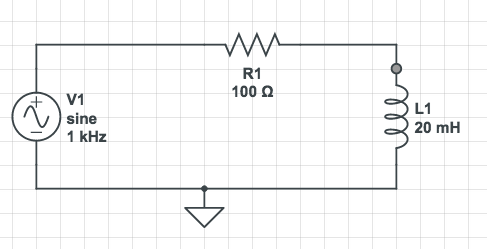 For which the phase response with frequency looks like this: 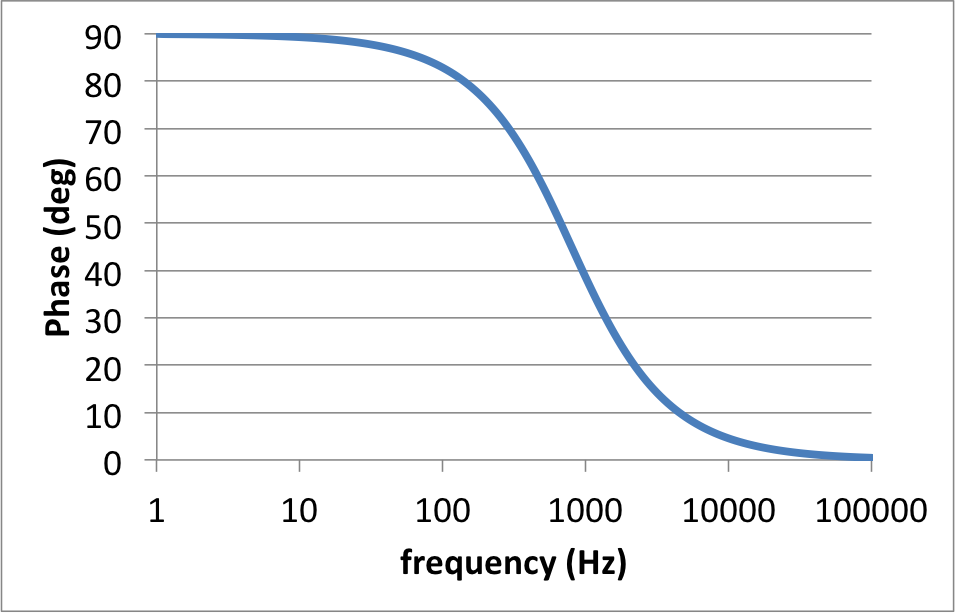 The simplest way to analyze this (apart from using an online circuit analysis program - as can be found for example in the editor of our sister site electronics.stackexchange.com) is to use complex arithmetic.

Adding another resistor $R_s$ to the circuit, you can draw yourself a simple voltage divider and repeat the same calculation.

The power dissipation in the inductor is given by the real part of the current only - the imaginary part, as I tried to explain above, is "giving and taking" energy over the course of a complete cycle and therefore doesn't contribute. But just to make life a little bit more interesting, it is not simply the internal resistance $R$ that contributes to the losses - for an inductor with a core (like a transformer), there is an additional loss term due to eddy currents (which result in another "real" component of the impedance). Also, the internal resistance is a function of frequency because of the skin effect - at higher frequencies, current tends to flow in the surface of a conductor only, and not throughout the core. This effect is strongest at high frequencies and for larger conductors - it is already a concern in high voltage power transmission lines, even though they operate at 50 or 60 Hz - but usually we think of this as a problem at RF frequencies.

Ignoring for a moment these subtleties, we can compute the power in two steps. First, we find the amplitude of the current as a function of frequency (for the circuit with just internal resistance in the transformer, and no additional external resistor):

You can see that the current will decrease with frequency - this will become significant once $\omega L > R$. Then the power dissipated is the real part of the current multiplied by the voltage (and a scale factor for integrating over the full cycle - just like the conversion from amplitude to RMS), or

At low frequencies this tends to the familiar result $P \propto \frac{V^2}{R}$, and at high frequencies it tends to zero. Power should drop by a factor $\sqrt{2}$ when $R = \omega L$. You should be able to measure the series resistance of the transformer and deduce the inductance by looking at your power curve to see where that point occurs.

Incidentally, you can do some good measurements with an analog oscilloscope. For example, if you put the scope in XY mode and put the drive voltage on one axis and the voltage across the transformer along the other axis, you should be able to see the shape of the XY plot change from a straight line (at very low frequencies) to a more open shape as the frequency increases. Using the cross hairs (which your scope presumably has) you can determine the value of current and voltage intercept as the curve crosses the X, Y axis (make sure the signal is properly centered), and you might be able to estimate how much larger the signal is at the peak. Using math similar to that shown above, you can learn a lot about the voltage and current from this. See for example this picture which shows what you would expect for a very small phase shift (0.1), medium shift (0.5) and a full $\pi/2$ 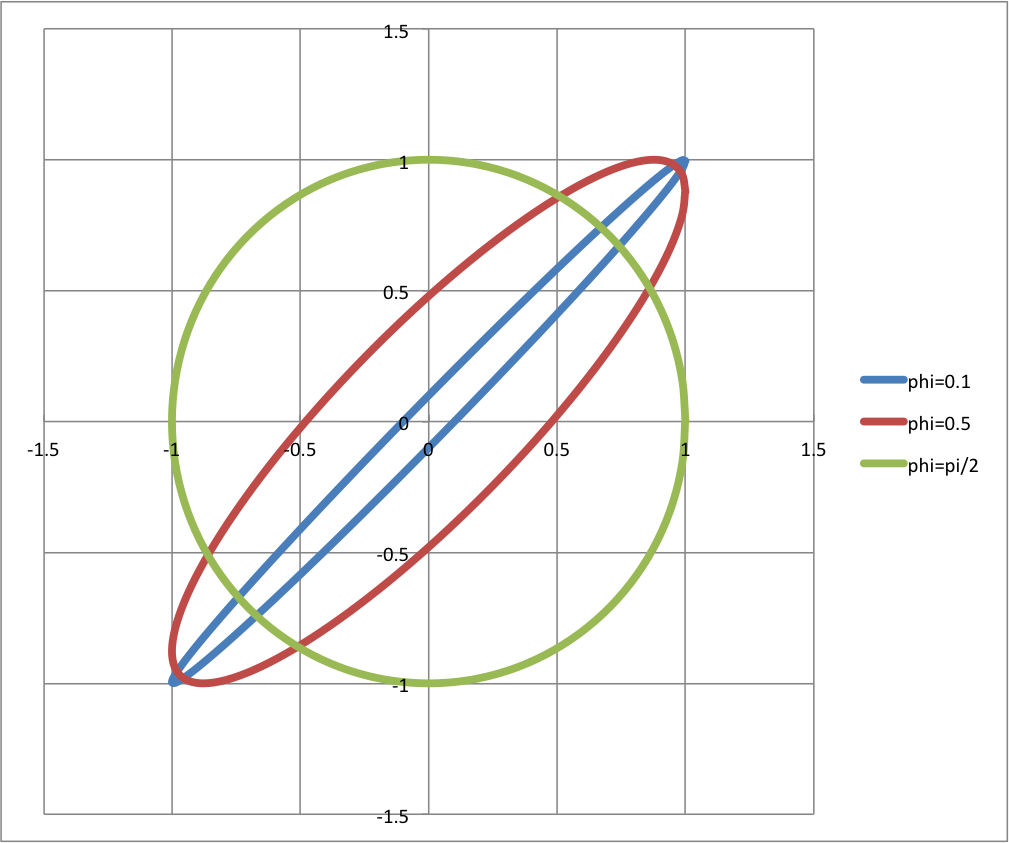 Not the answer you're looking for? Browse other questions tagged electromagnetism power or ask your own question.

2
An Ideal Transformer
4
How does the energy remain conserved in a transformer?
0
How to combine multiple transformers in series?
0
Should a Step Up transformer necessarily need more Windings?
0
Why this transformer have different power input & output?
0
How step-up transformers help in transmission of electrical energy over long distances?
0
Oscilloscope measurement on primary coil changes secondary coil voltage
0
Why is the power unchanged by a transformer?