For a stationary loop of wire with a time varying magnetic field $\vec{B}(t)$ through it. Is it possible to derive Faraday's law, using only the Lorentz force

in some way? The way I would go about doing this is by finding the work done around on a pacticle as it made one full loop around the wire, and by defintion this is the induced emf in the wire. As follows:

But I don't see how we can then turn this directly into flux, of in fact why it is not $0$ since $\vec v$ should, for a particle moving around the loop, be always perpenduclar to $d \vec l$ and thus the integral goes to 0. I assume that we need to introduce the electric field created by the time varying magnetic field for this to work. Is there any way of doing this without giving a circular argument? Or is there another way to derive Faraday's law for a stationary wire in a time varying magnetic field?

Thus if your circuit is stationary, your integral of $q\vec{vV}\times\vec{B}$ is going to give you zero since the velocity is either (thermally) random (so averages out over the many charges) or along the direction of the wire (why we are considering a thin wire), so this vector, $q\vec{v}\times\vec{B}$, is orthogonal to the wire.

Avoiding circularity is hard, since it is actually the circulating $\vec{E}$ that causes the change in $\vec{B}$. And there is a circulating $\vec{E}$ even inside the areas spanned by the circuit (far from the wires). if you want a completely rigorous derivation, you could consider the source of the $\vec{B}$ field, so you can see what causes the $\vec{B}$ to change. For instance, wrap a solenoid around your circuit. To get a current through your solenoid you need to apply a circulating electric field. And then the causality is clear.

But then it becomes a mutual induction problem.

With a stationary loop of wire and field $\vec B$ varying in time it doesn't seem that you'd be able to exploit the Lorentz force, because it's difficult to introduce the velocity $v$. But another configuration may be more helpful, see picture. 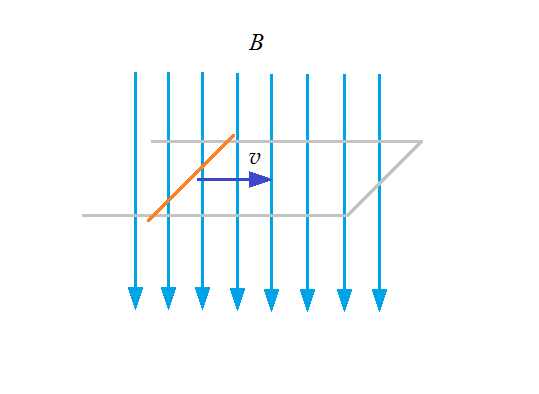 A metallic rod (orange) crosses the magnetic lines (light-blue) with a constant velocity $v$ (blue) in the shown direction. It indeed moves the electrons in the rod as your formula $(1)$ says. The rod glides on two metallic tracks (light-gray) which are connected through another rod (light-gray) to form a closed circuit.

Although the field $B$ is constant, the magnetic flux $\Phi$ varies in time, because

At this point I leave the issue to you. I suggest you to think what is the relationship between work $W$ and potential difference $\mathcal E$, and what is the connection between the integration over the loop in your $(2)$ and the quantity $D$ in my $\text {(ii)}$. Hint: in the grey bars no electromotive force is produced.

Not the answer you're looking for? Browse other questions tagged electromagnetism electricity magnetic-fields induction or ask your own question.