Will an object falling into Earth's orbit start spinning?

Assume an object falls towards Earth (I've drawn a hyperbolic orbit, but this would apply to any orbit). The object starts at $A$, and at this point it is not rotating i.e. an observer on the object would measure no fictitious forces. Will the object rotate as it passes the Earth and moves away?

My Newtonian intuition tells me that the object will not rotate so we will see all sides of the object depending on its orbital position. This is because the object had no spin prior to orbiting Earth. The motion through the orbit would look like:

My Einsteinian intuition tells me that the object should "rotate" from our perspective because it's following the curvature of space and it is moving in a straight line. The motion through the orbit would look like:

Which one is correct, and why?

The easiest way to see this is to replace the spaceship by a gyroscope, and make the gyroscope sufficiently small that we can ignore tidal effects. Then we can measure the direction of the axis of rotation of the gyroscope. In fact this experiment has been done - it was done by Gravity Probe B. The results are nicely summed up by this diagram from the linked article:

Gravity Probe B used a circular orbit, but the same applies to any orbit.

Let me assume that the object has spherical symmetry, however, for solving the present problem it is painted on its surface with different colors. So, imagining a plane section that contains the orbit of the object around the earth. The section of the plane through the object is a circle and we will see different points of the circumference painted in different colors.

At every time during its movement the object has a velocity consisting in two components: the original velocity, and the velocity toward the center of the Earth. So, at each time the object undergoes an inertial translation, as a whole (recall what Einstein said that that an accelerated system can be considered at each time as an inertial system with the instant velocity). Thus, at each instant another color will be in the direction of the Earth. 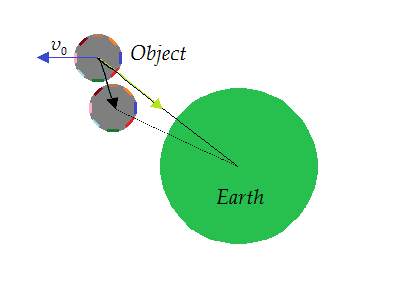 But these are two close instanciations. In continuation, as the object moves, the red segment will get more and more to the left of the line towards the Earth center, and the blue segment will be seen from the Earth. Thus, from the Earth, the colored segments will be all seen, step by step.

6
Does Gravity / curved space cause rotation?
0
Does the Moon have rotation about its axis?

1
A small object on the opposite side of the earth's orbit with 0 velocity,"in line" with the core - would it collide with the earth?
16
How can a planet gravitationally capture objects?
2
Orbital parameters of more than two bodies
5
If a stationary ball of neutrinos were released at the equator, what orbit would it take?
3
Total energy of orbiting body less than $-GMm/2a$?
0
Will the water stay in a falling glass?
6
Will extracting power from ocean tides affect the moon's orbit in the LONG run?
6
Wouldn't Millers planet be ripped to shreds by extreme tidal forces?