Why do the quarks constantly change colors?

In a hadron the quarks constantly change colors.They,then exchange gluons to remain color neutral.For example a red quark becomes blue by emitting a red and anti blue gluon and then the blue quark absorbs it to become red. Why do the quarks change color at all?

It is not clear how much you know about elementary particles and interactions. 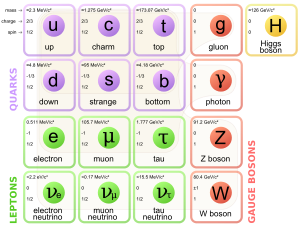 And these are the forces with which the elementary particles interact and finally create matter as we see it everyday.

The quarks within the proton and neutron interact mainly with the strong force, because they are so close to each other that the other forces are insignificant to first order.

This is a simplified diagram of what happens in a proton, which is made up of three quarks. 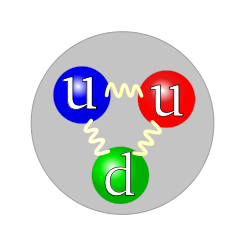 The Tiny White Lie: Wikipedia's sterotypical image of a proton as two up quarks and a down quark bound together.

The reality is more complicated because of the strong force: 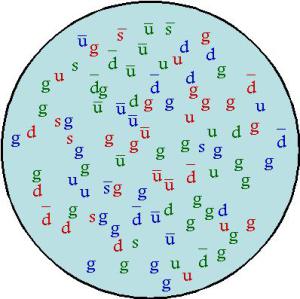 The quarks and gluons exchange color charge when interacting in the soup in such a manner as to keep the whole proton color neutral.

The bottom line is that the quarks change color because they are interacting with each other and a sea of quarks and antiquarks within the nucleus due to the strong force, and interaction=color-charge exchanges also.

( The interactions are similar but not the same with molecules in a liquid, they keep exchanging photons interacting with each other, but photons carry no charge, whereas gluons carry color charge )

Not the answer you're looking for? Browse other questions tagged particle-physics quantum-chromodynamics quarks strong-force or ask your own question.

1
Colorless charge in a baryon

8
Do color-neutral gluons exist?
6
Does the color of a quark matter in a meson?
5
Can quarks of different colors annihilate?
3
Quark model in particle physics; is it possible for a particle to exist with five or seven quarks?
4
How does quark color affect the identity of a hadron?
3
Why is color change between quarks without consequence?
0
Does quarks always pulls each other?
2
If quarks change colours constantly how are proton and neutron stable relatively?