How does independence of two systems follow from the fact that they are both completely described?

Update: No interaction is not assumed, as Martin pointed out in his answer. I added a screenshot added below, yellow text corresponds to the above quote. Also, what is meant by complete description is of course the following:

"Completely described states occur as a result of the simultaneous measurement of a complete set of physical quantities." 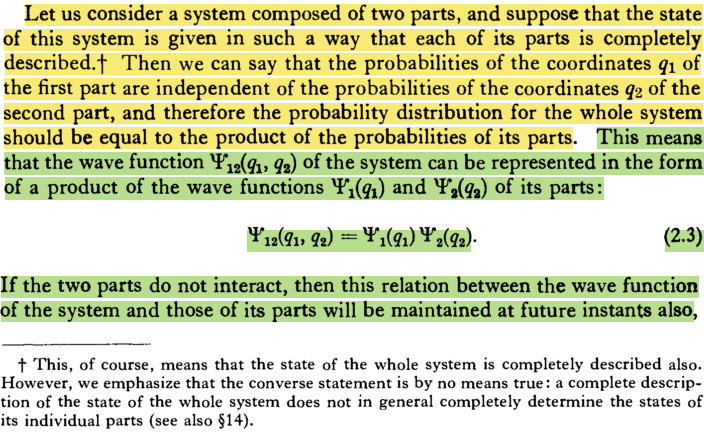 Update 2: Ján Lalinský mentioned the density matrix description. I think this another quotation might be crucial for understanding of the above problem:

How does independence of the two systems follow from the fact that they are both completely described? What does it mean exactly?

There are other modes of description, via density matrix, via function $\Psi_{whole}(q_1,q_2)$, via point in phase space etc.. L&L assume we have a special case when $\psi_1(q_1)$ is best of these and call it "completely described".

The idea that I can decipher from their quoted text is this:

In words, the probability for a region of configurations $q_1$ is independent of the configuration $q_2$ and vice versa.

where $\alpha$ is some real number from the interval $\langle 0,2\pi)$. Since the value of $\alpha$ has no consequence on probabilities, by simplicity we choose $\alpha=0$.

Does independence mean no interaction?

However, if there is interaction and it is strong enough, it is not reliable to assume that the systems are independent.

It doesn't - at least I would say that it doesn't given only the words there.

I believe what they meant to say is that the system is completely described by describing each part individually. In this case, since describing one part of the system does not require knowledge of the other, the probabilities are independent.

We can start by understanding what an incomplete description involves. A quantum mechanical system, isolated from the rest of the world, can be described by a density matrix (or state matrix) $\rho$, rather than a wavefunction. If a quantum mechanical system is described by a wavefunction $|\Psi\rangle$ then that simply means that it is in the unique state for which the observable $|\Psi\rangle\langle\Psi|$ has expected value $1$; in general the expected value of an observable operator $\hat O$ in state $\rho$ is given by the trace operator:

We could therefore say that when you do have a wavefunction, your state matrix is $\rho ~=~ |\Psi\rangle\langle\Psi|$.

Suppose you've got a system of two qubits; there are states like

So if you trace out the second qubit in the above state you get the state matrix:

And here you can see that there is no operator $|\Psi\rangle\langle\Psi|$ such that the trace produces anything other than $1/2$. This first qubit is "classically" half in $|0\rangle$ and half in $|1\rangle$ if you throw away the second qubit's information.

On the flip side, there are two-qubit states like:

7
How to connect these two formulations regarding the need for a density matrix in quantum mechanics?

15
Is it wrong to talk about wave functions of macroscopic bodies?
0
Quantum state of a system after measurements with non-commutative operators
3
Tensor product in many electron atoms
1
Why is it not possible to describe a mixed quantum state by a Hilbert space vector?
0
How do I know whether the description of an electron state is complete?
5
Interpretation of density matrix
1
Negative-result Measurement interpretation and the Quantum Zeno effect
2
Energy in interaction hamiltonian and energy levels in pump probe experiments