Is there a maximum frames per second (FPS)?

Take a video camera and crank up the frames per second rate.

Disregarding current technological advancements, could a camera's FPS go so fast that any two captured images be identical? Would accomplishing this defy "time"?

I've worked on a camera that has as one of its core features the ability to increase the FPS until you are counting single photons. Here is one of the pdfs about it. You will see from the figures that there is an intrinsic tradeoff between the noise/image-quality and the FPS, which is simply due to the statistics of photon counting noise as you get fewer photons. See for example figure 7, where there is an examination of photon statistics under various temporal and spatial binning. This sort of analysis is very relevant in low light limits where we are naturally photon starved, but it should be clear to see that the same concept would extend to a high light limit, just with the ability to go to shorter frame times than we are currently able.

Once one got to a VERY short time period, Heisenberg's Uncertainty Principle would start to severely disrupt the image. Since $\Delta E \Delta t \ge \frac{\hbar}{2} \approx 5.3\times10^{-35}~\textrm{Js}$, and a blue photon is around $5.0\times10^{-19}~\textrm{J}$, that leaves us at about $1.1\times10^{-16}~\textrm{s}$ as the frame time at which the measurement is so short that the energy uncertainty would be equivalent to the energy of the photons we were trying to observe. Everything would be a noisy blur at that point, and therefore this is probably a fundamental limit for visible light.

In addition to the good answer of MSalters it is worth pointing out that individual photons arrive on the detector of the camera at different times. The way that cameras work is that they convert photons arriving into a signal that can be read out.

No matter how high the fps rate there will be some point in time where one frame is finished and the new one begins.

For the two pictures to be identical the object being imaged must remain stationary on the timescale of fps speed - meaning that the object cannot move more than a distance the camera can resolve from one frame to the next...

....and as MSalters point out the arrival of individual photons at the detector can lead to another point that as the fps increases less photons are detected per frame and the image can change from frame to frame simply due to the statistics of their only being a few photons detected per frame.

Taking this to a logical extreme if fps gets so high that less than one photon is absorbed in each frame then you could have pairs of images that are identical because they have no signal at all...., but I do not think this is the answer you wanted.

Are you aware that light consists of quanta (Sophia might have been a bit premature in her comment to say QM is not involved). Each photon captured by the camera is captured in one frame, for practical purposes. So the problem as we increase the FPS is that each frame is now based on fewer and fewer photons.

This isn't just theory. We've done this experiment, and you get surprising results. In particular, we've done this experiment with light shining through a double slit. With a low FPS, we get darker and lighter bands. But with a high FPS, we see that each frame has an incredibly random pattern of photon hits. The darker bands are dark because there's no hit in most of the frames, whereas the lighter bands have one or more photon hits in each frame.

The main thing here is that each individual photon behaves quite randomly. It's just on the aggregate where you see the real picture emerge from the randomness.

There's an interesting phenonemon known as the quantum Zeno effect which concerns extremely rapid measurements (like your hypothetical camera) and objects remaining stationary.

To tell which state a system is in, eg. whether an electron's spin is up or down, we must measure it. According to classical physics, the system is in one particular state, and performing the measurement merely informs us which state that is.

The quantum Zeno effect happens when we measure the system so quickly that there's not enough time for the probability to "spread out" to the other states. Each time we take a measurement, it's highly probable that the wavefunction will "collapse" to the same state we previously measured. By measuring the system quickly enough, we can cause it to remain stationary for as long as we want!

I believe that the currently attainable limit of imaging is around 10's of atto-seconds per time slice (around 10^-17) from which it is possible to observe individual state transitions of an electron in silicon (which takes around 450 atto seconds, or about half a femto-second). 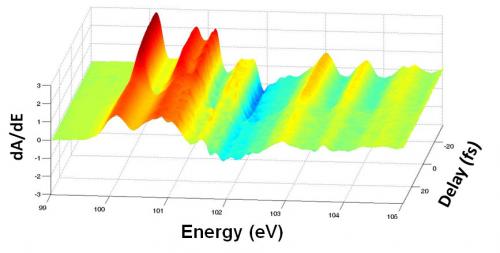 So, let's disregard technical feasibility, and assume we have something similar to a CCD camera sensor, but made of unobtanium, and just "fast enough", always. I will call it uCCD. It has no thermal noise, of course.

Now, we take a normal picture, with shutter set to 1/60 of a second.
What did the uCCD sensor do? Each pixel collected photons for 1/60 s, and at the end, we asked the sensor how many photons it got for each pixel.
Taking another picture like this immediately after, we get pixels showing us how the scene looked during the next 1/60 s on average. So, the difference between two frames is not comparing how it looked at two points in time, but in two periods of time on average.

We want a very high frame rate, so let's try with a shorter shutter time, much shorter.
Now, we get averages of much shorter periods. And very dark images.
The images are darker just because we get much fewer photons in the much shorter time.

Now it gets interesting; We make the shutter time so short that we only see one photon per pixel on average.
Now, the images are almost completely dark - and extremely noisy!
The noise is because some pixel are absolutely dark, because they did not see any photon during the shutter time. That's because the photons arrive pretty randomly; just more often where the picture is lighter.
We can add some of the dark and noisy pictures together - then the noise evens out, and the result is not so dark.

Next, we make the shutter time so short that we get only one photon in the whole sensor on average, so that most pictures have absolutely black pixels except of one.
One could say it got even darker - and even noisier. But adding frames up would still work.
By now, the frame rate is as high as it can go if we want to get any meaningful pixel data at all in most frames.

Of course, we make the shutter time shorter again, say half of the previous.
That gives us one photon every second frame only.
But what happens in between, when we see absolutely black every other frame? As far as we can see, absolutely nothing happens - nothing changes at all. When we add up some frames to get a lighter picture, it's the same result with and without an absolutely black frame. We see no change at all - even if the scene we look at is changing with whatever high speed is possible. In terms of what we see, no time elapsed.

Oh, and if you do not have enough unobtanium at hand, take a look at Ryan Colyers answer.

Not the answer you're looking for? Browse other questions tagged time discrete camera or ask your own question.

6
Is there a limit to frames per second to be captured?
1
Rate of time progression
0
What is the true way to determine time parameters from semilog graph?
0
Resolution of a Michelson Interferometer using a Webcam