Please I would like to know how the resistance of the plates of a capacitors work? Is it the same as a resistor? If yes, is there electric field inside the plates like inside a resistor?

Actually, the capacitor is an open circuit. It has infinite resistance. (I will assume a DC circuit.) 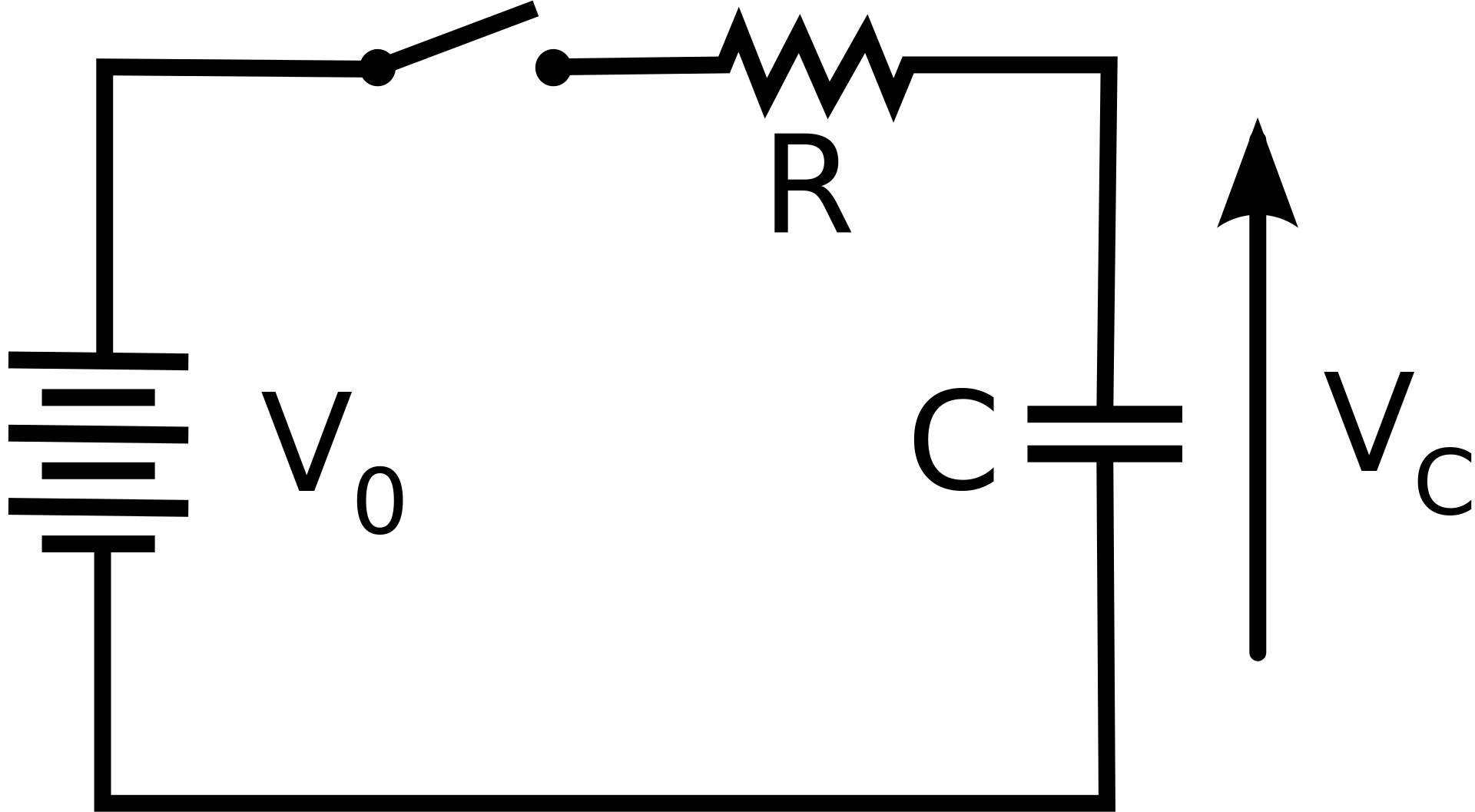 In the moment that you turn on the current in the circuit (as "closing" the switch in the picture), current runs as if there was no blocking (corresponding to 0 resistance). Charge flows to the plate and pushes the same amount of charge away from the other plate. From the outside this looks as if it was just a wire.

Between start and some long time $t$ later, charge will gradually build up towards it's max-value and therefor current will gradually decrese towards zero (corresponding to resistance gradually increasing towards infinity), as this graph shows:

The dotted line is the current - it starts high, and ends low. The red line is the charge build up. The voltage over the capacitor is constant, so if you want to find the equivalent "resistance" $R_{eq}$ (which will change with time), use Ohm's law:

Just remember that it is not resistance in a physical material as in the usual way.

I agree with both of the two answers above. But I would also suggest that the term resistance should not really be applied at all to a capacitor ( I think it leads the question astray ) Going to the more general notion of impedance ( I would use the complex formulation ) the question makes more sense to me. This immediately brings in the importance of frequency. For real, as opposed to ideal, caps the concept of equivalent series resistance, ESR, is in a sense the resistance of the cap, but I may be straying.

A capacitor has an infinite resistance (well, unless the voltage gets so high it breaks down). The simplest capacitor is made from two parallel plates with nothing but space in between - as you can guess from its electronic symbol.

In a DC circuit, a capacitor acts as an open circuit and does not permit current to pass. In an AC circuit a capacitor has an effect because it acts as a current reservoir while the current is changing. This can have the effect of smoothing the current spikes so it performs a damping effect.

So the thing you will want to look up is parasitic resistance in a capacitor and an inductor has the same thing. In the real world these types of devices must have a resistance becuase we do not have ideal resistors, capacitors, inductors, and the like. On the other hand when looking at a circuit problems in school you will work with ideal sources in which the other answears cover fairly well.

Not the answer you're looking for? Browse other questions tagged electric-circuits electric-fields electrical-resistance capacitance or ask your own question.

0
Is it capacitor ohmic material or not?

0
Variable Resistance
1
Modelling a capacitor with dielectric resistance as a circuit element
0
Parallel capacitors discharging with different capacitances
2
Partially Filled Capacitors
2
Paradox in Circuit Theory
1
What is the difference between the two formulas for each of resistance and capacitance?
0
Confusion regarding charge on capacitors
1
What happens if two capacitors having different charges is connected in series?