Gauss' law giving zero field where field is not zero? 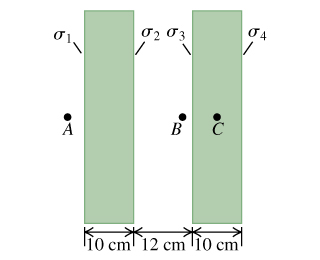 I'm trying to find the field at $B$. I obtained the correct answer by adding up the fields created by each charge density. But I realized that since the field is uniform in the region between the two sheets, I should be able to make a Gaussian surface between the sheets with the shape of a box and with one edge at $B$. Thus, the flux would be

Because there would be no charged enclosed inside the surface. However, that means that $EA$ is $0$ (Note the integral reduced to $EA$ because $E$ is uniform). Since $A$ is not zero (it is the area of two sides of the box), this means that $E$ must be zero. However, $E$ is not zero there, as you can see by adding $\frac{\sigma}{2\epsilon_0}$ for each charge density.

What am I doing wrong when using Gauss' law?

You tell us that one surface of the box is at $B$, but you're a little vague on where the opposite face is. You do say that your surface is "between the two sheets", so I think you may mean that the surface is entirely contained in the space between the two sheets. The box does not intersect any charged surface. With that, and a uniform electric field in that region, the flux on the opposite face will have a sign opposite to the flux at the surface at $B$. The total flux is zero. The field and flux at any portion of the surface can be non-zero. Gauss speaks only to the total flux.

If you apply the superposition principle and for each separate plate and calculate the field by Gauss law then adding the fields gives: $E= \frac{\sigma_3-\sigma_2}{\epsilon_0}$

Not the answer you're looking for? Browse other questions tagged electromagnetism homework-and-exercises electrostatics electric-fields gauss-law or ask your own question.

0
Determining Electric Field Inside Long Cylinder (Using Gauss' Law)?
2
Gauss's Law for Non-Uniform Electric Fields enclosed within Gaussian Surfaces
0
What should the $E$ (electric field) represent when using the Gauss Law?
0
Field inside hollow sphere with gauss law
0
Gauss law apparent violation
0
If no net charge is in a Gaussian surface, is the electric field zero?