Are the Jacobi equation and the geodesic deviation equation related?

On page 111 in his book Riemannian Geometry, Manfredo Do Carmo states what he calls the Jacobi equation

where $\gamma$ is a geodesic. Note, here we are dealing with Riemannian manifolds. Here's the Wikipedia page on the Jacobi equation

On page 34 in their book Graviation, Misner Thorne and Wheeler state what they call the equation of geodesic deviation:

Are these equations related?

Both seem to involve measuring geodesic deviations somehow. Misner Thorne and Wheeler frequently refer to this idea called a separation vector $\xi$. I got the impression this was somehow related to Jacobi fields, but I'd like someone to confirm this is true and explain how specifically Jacobi fields and the Jacobi equation are related to the geodesic deviation equation, if at all.

Do Carmo never refers to a "separation vector", at least no where I have seen and not in the index. I can't tell if separation vector is a commonly used term or just by MTW. Do Carmo obviously talks extensively about Jacobi fields, devoting a whole chapter to it.

The separation vector is a Jacobi field because it obeys the Jacobi equation.

Here I will derive geodesic deviation from scratch because I find MTW's derivation hard to follow. (Much like everything else in that book.)

Definition 1. Consider a family of timelike geodesics, having the property that in a sufficiently small open region of the Lorentz manifold $(M,g)$ precisely one geodesic passes through every point. Such a collection is called a congruence. The tangent field to this set of curves, parameterized by proper time $s$, is denoted by $u$ and is normalized as $\langle u,u\rangle=-1$.

Let $\gamma(t)$ be some curve transversal to the congruence. This means that the tangent $\dot\gamma$ is never parallel to $u$ in the region under consideration. Imagine that every point on the curve $\gamma(t)$ moves a distance $s$ along the geodesics which passes through that point. Let the resulting point be $H(s,t)$. This defines a map $H:O\longrightarrow M$ for some open $O\subset \mathbb{R}^2$. For each $t$, the curve $s\longmapsto H(s,t)$ is a timelike geodesic with tangent vectors $u(H(s,t))$. We say that $u$ defines a vector field $u\circ H$ along which the map $H$ is tangential, i.e. of the form $$u\circ H=H_*\circ\frac{\partial}{\partial s}\quad\text{or}\quad u\big(H(s,t)\big)=T_{(s,t)}H\cdot\frac{\partial}{\partial s}$$ In other words, $u$ and $\partial/\partial s$ are $H$-related. We shall use for $u\circ H$ the same letter $u$. Let $v$ be the tangential vector field along $H$ belonging to $\partial/\partial t$ $$v=H_*\circ\frac{\partial }{\partial t}$$ The vectors $v(s,t)$ are tangent to the curves $t\longmapsto H(s,t)$ ($s$ fixed), and represent the separation of points which are moved with the same proper time along the neighboring geodesics of the congruence (beginning at arbitrary starting points). This is shown in the following diagram (taken from Straumann, General Relativity [2013]): 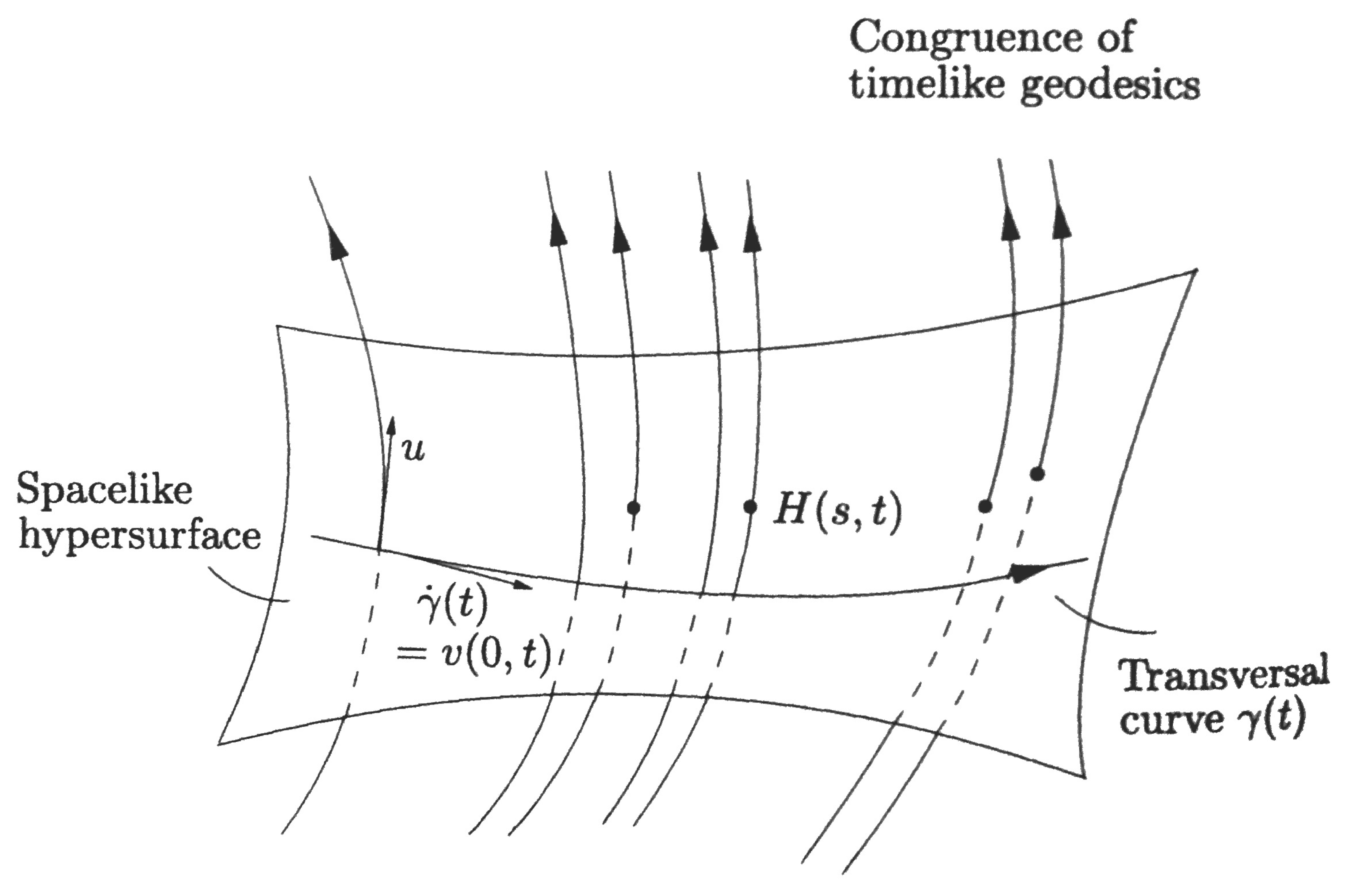 In more familiar notation, we have $$\frac{D^2 n^a}{D\tau^2}=R^a_{\;bcd}u^b n^c u^d$$ So why even bother calling this equation a Jacobi equation? Perhaps there is some general result of Jacobi fields that we wish to apply to GR? This is indeed the case.

Definition 2. Let $\gamma$ be a geodesic. A pair of points $p$, $q\in\gamma$ are said to be conjugate if there exists a Jacobi field $n$ which is not identically zero but vanishes at both $p$ and $q$.

There exists a very powerful theorem regarding conjugate points (suitably generalized here to spacetime, but a similar version holds in positive-definite spaces):

This theorem is the basis for the singularity theorems of GR. Since MTW doesn't discuss these theorems (AFAIK, haven't read the whole thing), they don't need to mention Jacobi fields or conjugate points. Indirectly, this property of Jacobi fields is used in the justification for Big Bang cosmology.

For more in-depth discussions, I refer you to

(in that order) and references therein.