This is very hypothetical question. Consider all chemistry (even bio-chemistry) is just physics of valence electrons. Because solutions of Schroedinger equation for system of electrons and nuclei are highly anisotropic and directional ( like sp$^3$-hydridization ) you can at the end form structures like proteins and DNA.

The only stable structures bound by nuclear forces we currently know are around 250 nuclei of stable isotopes ( Am I right ?). All of them are basically just spherical clusters of nucleons (only few halo nuclei deviate from liquid drop model but just a little).

But is there any (even very speculative) possibility to form something more complex (perhaps like nuclear polymer), or is it completely exclude by laws of nature?

Possibly it is just matter of kinetics? Almost all nucleosynthetic processes (both natural and human made ) create new nuclei in excited state by harsh collisions. It is natural that such nuclei has a lot of excess energy to overcome activation barriers and create most stable but boring spherical clusters. It's a bit like doing chemistry in hot gas - you never create more complex molecules. Maybe if there would be an hypothetical method how to prepare such nuclear structures in gentle way ( cool, not excited ) it would be quite stable?

And even if it is not possible in normal conditions on earth, maybe such complex nuclear structures may exist on the surface of neutron stars, in phase transition from normal matter to nuclear matter. Is that what is called nuclear pasta?. ( I would like to read something )

By the way - is there any good book which discuss nuclear structure form the perspective close to chemist ( quantum chemist, chemical physicist ) - i.e. discussing everything in terms of "nuclear orbitals" (and it's shape) in analogy to atomic orbitals and molecular orbitals.

Yes, there are phases of matter that correspond to your question that exist inside neutron stars and are known collectively as nuclear pasta.

The inner crust of a neutron star has densities $>4 \times 10^{14}$ kg m$^{-3}$ and consists of a lattice of extremely neutron-rich nuclei, surrounded by degenerate gases of neutrons and ultrarelativistic electrons that behave like fluids. The equilibrium composition and structure is found by forming the sum of the energy densities of these components and then minimising it with respect to the number densities of the nuclei, neutrons and protons, and the numbers of neutrons and protons in the nuclei, subject to baryon and charge conservation.

Above densities of $\simeq 3\times10^{16}$ kg m$^{-3}$, nuclei probably start to lose their separate identities and spherical nature, forming elongated rods or planes of nuclear material -- nuclear pasta. Initially the nuclei are thought to group into "spaghetti" and then into "lasagna", where the sauce is provided by the gaseous free neutrons. As densities exceed $10^{17}$ kg m$^{-3}$, it is thought these roles reverse; the gaseous neutrons form into spaghetti like structures sourrounded by nuclear material and then finally, shortly before dissolution, the crust consists of nuclear material enclosing spherical bubbles of neutron gas.

Here is a schematic picture, due to Newton et al. (2011) that shows how the pasta phases develop with increasing density. As I show in some more detail below, the departure from an ordered lattice of spherical nuclei is expected to occur on the nuclei fill more than abut 1/10 of the volume. 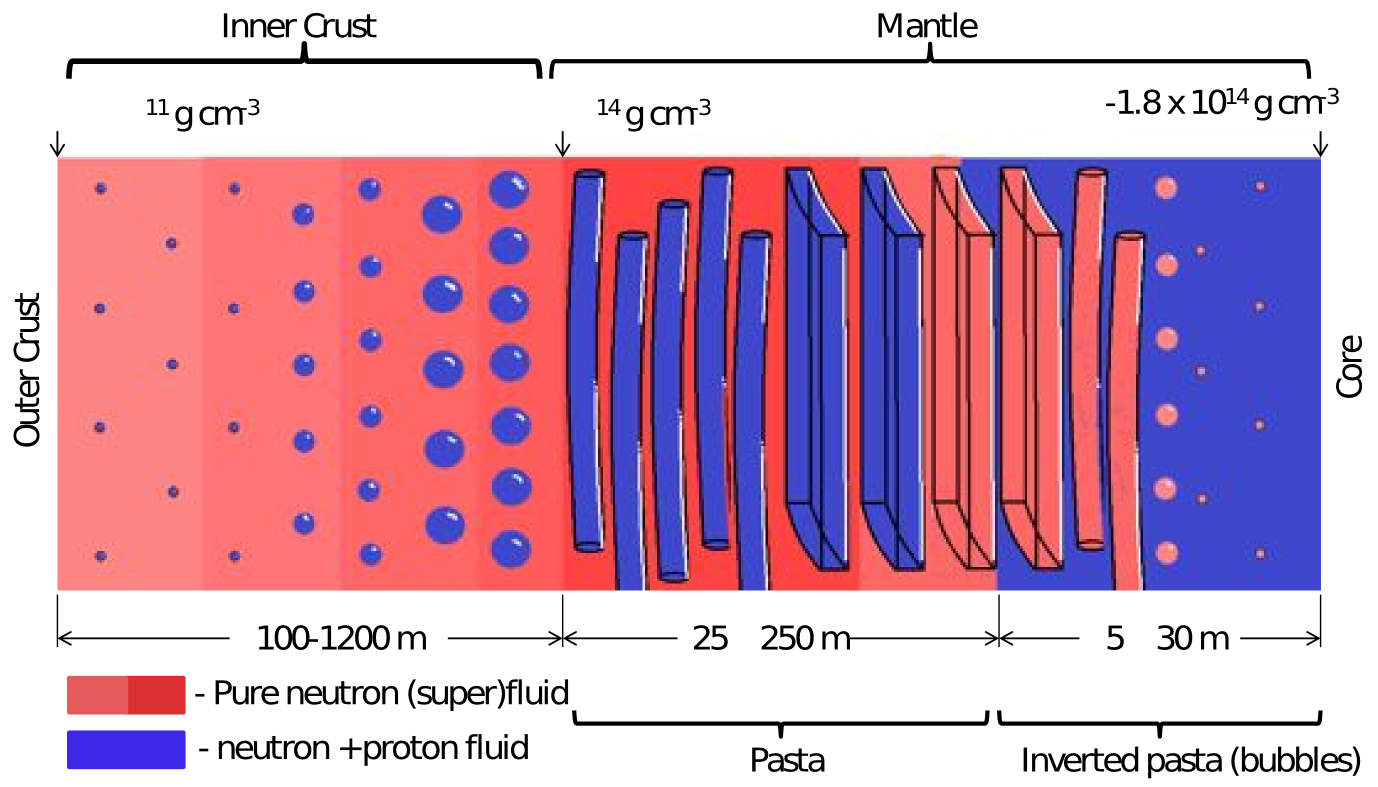 If we put this into the Bohr-Wheeler condition and use equation (1) for $E_C$, then we find that $f > 1/8$. In other words the nuclei become unstable to fission and deformation once they fill about one tenth of the total volume, which corresponds to densities of $\sim 3 \times 10^{16}$ kg m$^{-3}$.

Not the answer you're looking for? Browse other questions tagged nuclear-physics neutron-stars orbitals nucleosynthesis or ask your own question.

5
Is there any significance of atomic orbitals?
0
Nuclear bound states
41
Do electrons really perform instantaneous quantum leaps?
2
What is the extreme long-term elemental composition of the universe?
4
Is there any simple way to predict beta decay half lives?
1
Nuclear synthesis and neutron star collisions
2
Can muons be used to reach the island of stability of superheavy elements?