What happens before a radioactive element decays?

What happens to a radioactive element just before it decays?

In school, I've been told that the decay process of an element is absolutely random, and it is impossible to determine which unstable element decays next. Clearly, there needs to be a triggering event. What is this event?

Nothing happens! It's random! The nucleus is in an unstable state, and unstable states have a certain small probability to decay within a given amount of time (how small depends on the nucleus). There's not much else to it! Sometimes decay can be stimulated but the type of decay you're talking about is truly random.

As the other answers state, the individual nuclei have a probability of decay and this happens randomly, as they sit there.

You are correct though in wondering about a trigger, because at the atomic level that is exactly what happens with lasing, induced-emission = induced-decay.

Spontaneous decay is random, controlled by the quantum mechanical individual atom probabilities. A trigger is not necessary for spontaneous decay, but can induce decays, enhancing the probabilities greatly; that is how the lasing phenomenon is observed.

So a further question could be: "Is it possible to induce/trigger nuclear decays so that the probabilities of decay become large?". And the answer is yes; that is how we have nuclear reactors and bombs. 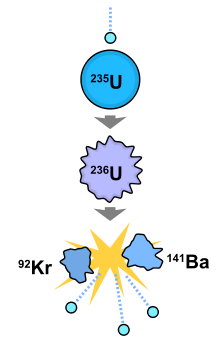 An induced fission reaction. A neutron is absorbed by a uranium-235 nucleus, turning it briefly into an excited uranium-236 nucleus, with the excitation energy provided by the kinetic energy of the neutron plus the forces that bind the neutron. The uranium-236, in turn, splits into fast-moving lighter elements (fission products) and releases three free neutrons. At the same time, one or more "prompt gamma rays" (not shown) are produced, as well.

It is called a chain reaction and depends on the density of neutrons available in the material, and thus is not random.

Spontaneous decays are random. Induced ones are not; they can be triggered.

There really is none.

Unstable elements (and unstable elementary particles) can decay into a less energetic state. However, each kind of decay depends on a quantum mechanical process, this is tunneling for $\alpha$, a virtual $W^\pm$ for $\beta$ or a transition from one nuclear shell to another for $\gamma$. Now these underlying processes can be strongly supressed, meaning that they are incredibly unlikely. Then it will take a "long" time until the process happens, and we have an unstable material.

The lifetime of a nucleus depends on how probable the decay process is. This can be computed to some accuracy for most decays. I think one of the most easy approaches to understand this is Gamow's theory of alpha decay, where the $\alpha$ particle is trapped inside the unstable core and keeps bouncing off potential walls. At every bounce however, the $\alpha$ particle has a tiny chance of tunneling through the potential barrier to the outside, where it is free. The higher and thicker the barrier, the less frequent the decay, the longer the half-life of the nucleus.

From this example it should be clear how nuclear decay can take a long time, but it still happens spontaneousely without an external trigger event.

An " intuitive" approach is to consider that in QM, the exact location of particles doesn't exist. They're all probability waves, and you never have a 100% chance to find a particle in exactly one place.

So for unstable nuclear atoms, the probability function of the protons and neutrons are smeared out even further. There's a significant non-zero probability of finding one of the particles away from the others.

But like Schrodinger's cat, a probability is not yet a fact until there's an observation. The nuclear decay has and has not happened at the same time. Once you observe that decayed atom or the particle it emitted, the probability wave collapses. The probability of finding the original radioactive becomes zero.

All the other answers that "no, there is no triggering event, it just happens, quantum mechanics is like that" are perfectly right.

This evidence is the statistical probability density for the decay lifetime. It is found in countless experiments that the decay times are exponentially distributed. The exponential distribution is the unique continuous pdf with the following property: if we take a particle which we know has not decayed after some time, any positive time (even if it is a million times longer than the mean decay lifetime), then the probability distribution, conditioned on this knowledge, of the particle's lifetime after that point is exactly the same as the unconditional distribution for the particle's lifetime. The discrete analogue of this dense statement is the geometric distribution and the discrete version of the idea can be summed up as "a coin has no memory". That is, if you toss a coin known to be fair and get a long run of heads, the probability that the next throw will give a tail (or head) is still $1/2$.

I explain these ideas more in my answer to the Physics SE question, "Are There Old Aged Particles".

Consider a particle in a box, but where the box has a thin wall, and the energy level outside the box is lower than that inside. (This is, e.g., a neutron in an unstable heavy nucleus.) Follow the development of this wave in time. It will tunnel out eventually to the lower energy state and propogate away. From this, you can see that the decay is always "happening", with the usual ontological caveats regarding wavefunctions.

An observation of the particle outside the nucleus in a particular place will invalidate the wavefunction view of the system; the decay has then happened in the normal sense. And because the wavefunction before this "collapse" is extended in time, and decaying exponentially, the time of the detection will be random, though distrubuted, over several experiments, with the exponential decay.

Not the answer you're looking for? Browse other questions tagged radioactivity elementary-particles or ask your own question.

27
Are there old aged particles?
2
How does an up quark decay into products more massive than itself?

6
Radioactive Decay
3
How do particles “know” when to decay?
8
How can quantum tunnelling lead to spontaneous decay?
2
Calculating total radioactive decay of a sample including daughter products
2
How should I interpret these decay chain numbers?
1
Alpha particle - air interaction
0
Is radioactive decay triggered by quantum fluctuations?
22
Why does a collection of radioactive atoms show predictable behaviour while a single one is highly random?