Can you thermally pump a laser? (and problems with population inversion)

Recently a question was asked during a lecture about the possibility of thermally pumping a laser. The lecturer claimed that this is pretty impractical as typical transitions in the visible light range are of the order of a few eV and so the temperature required to excite these transitions would be of the order of $10^5K$. At these temperatures you are likely to destroy your gain medium and so render the method redundant.

This is all well and good but suspend belief for a moment that we do have some laser gain medium which can withstand these temperatures and we wish to try and build a laser and pump it via heating. I think there is a more fundamental reason why this wouldn't work.

Where $Z$ is the partition function.

So if we look at the relative populations between say levels $|3\rangle$ and $|1\rangle$, (we would like to pump from $|1\rangle$ into $|3\rangle$) then we would have

In the limit of high $T$ we have that

In the very best case scenario we would have a one to one ratio, so from this I have concluded that you can't build a laser based on heating alone. Essentially I am asking is there a way around this? I have done some research and haven't been able to find a counterexample online. Is there a loophole somewhere in the analysis above that allows this to be done?

I'll take a stab at this, although I am not an expert in the laser fields.

The lasing process actually relies in part on this spontaneous decay to equilibrium and is itself a far-from-equilibrium process. This means it cannot be reproduced using negative temperature states that already are at equilibrium. See a similar explanation on this page from the group that authored the paper mentioned above.

So, does this mean the concept of "thermal excitation of a laser" is doomed? I'd say no, provided thermal excitation is not understood as simply elevating the temperature of an equilibrium state and the thermal occupation probabilities. We can look instead for instances of "thermal enabling" of lasing processes, where higher temperatures create the necessary conditions one way or another. Here are a couple of examples:

Certain random lasers based on dyes in colloidal media or liquid crystals can be controlled by means of temperature adjustments. In random lasers the medium itself functions as cavity and lasing is prompted by random diffusion of light causing cascade excitation of dye molecules. The gain is then determined by the photon scattering length and photon diffusion time. The latter two parameters, and therefore the gain, can be controlled by changing the scattering properties of the host colloidal or liquid crystal medium. For a system using liquid crystal the gain is simply conditioned by the crystal's temperature dependent phase (e.g., clear or opaque). This can work as "thermal enabling" of random lasing if the high-temperature phase is the working one (unfortunately in the example paper it is actually the other way around). For a colloidal medium, optical transparency is determined by the temperature dependent size of the colloidal nanoparticles. Random lasing occurs when the temperature is high enough to promote small colloidal aggregates and associated photon scattering, but low enough to prevent larger aggregates that obstruct scattering too much. So this is really "thermal enabling".

Lasing has also been observed in highly vibrationally excited water molecules and in Rydberg 3-atomic hydrogen molecules from supersonically expanding plasmas as they formed from corresponding ionic species. For $H_2O$-rare gas mixtures it was found that the "molecular ion rotational temperature [was] near 100K and [the] vibrational temperature near 2000K". For $H_3$ lasing it was hypothesized that the process involves an "excimer-like population inversion mechanism". There may be other examples, but I am not familiar with the field. In any case, it stands to mind that such species can also arise in high-temperature plasmas and if so would qualify as thermally excited/enabled laser systems.

In the study mentioned above the author actually proposes that the $H_3$ lasing mechanism may have been relevant in the cooling of the first giant stars formed after the Big Bang and so in the formation of primordial galaxies. Another possible astrophysical occurrence he suggests is in "the atmospheres of low mass stars that are cool enough to have significant $H_2$ and that have large flares, shocks in molecular gas that are fast enough to produce significant ionization, and gamma ray bursts or X-ray flashes that impinge on molecular gas, such that the post-burst gas simultaneously has high ionization and a high $H_2$ content."

Related astrophysical masers and lasers are actually well-documented, but I think generally involve ultra-low density conditions that are too exotic to qualify as "thermal". Maybe someone more knowledgeable in the subject can correct or confirm.

Such lasers exist and are used, it's called a gas-dynamic laser

A gas-dynamic laser is a CO₂ laser. A carbon containing fuel is burned with oxygen at high temperature and pressure in a device resembling a rocket engine. The resulting CO₂ is expanded through a nozzle where it cools down quickly. The lasing state transition is a vibrational transition, and the high energy state is metastable. After expansion the gas is out of thermal equilibrium, until the vibrational states also thermalize. The high energy state, being metastable, decays more slowly than the low energy state, so a certain amount of time after the expansion the CO₂ will be in a population inversion, and can be made to lase. 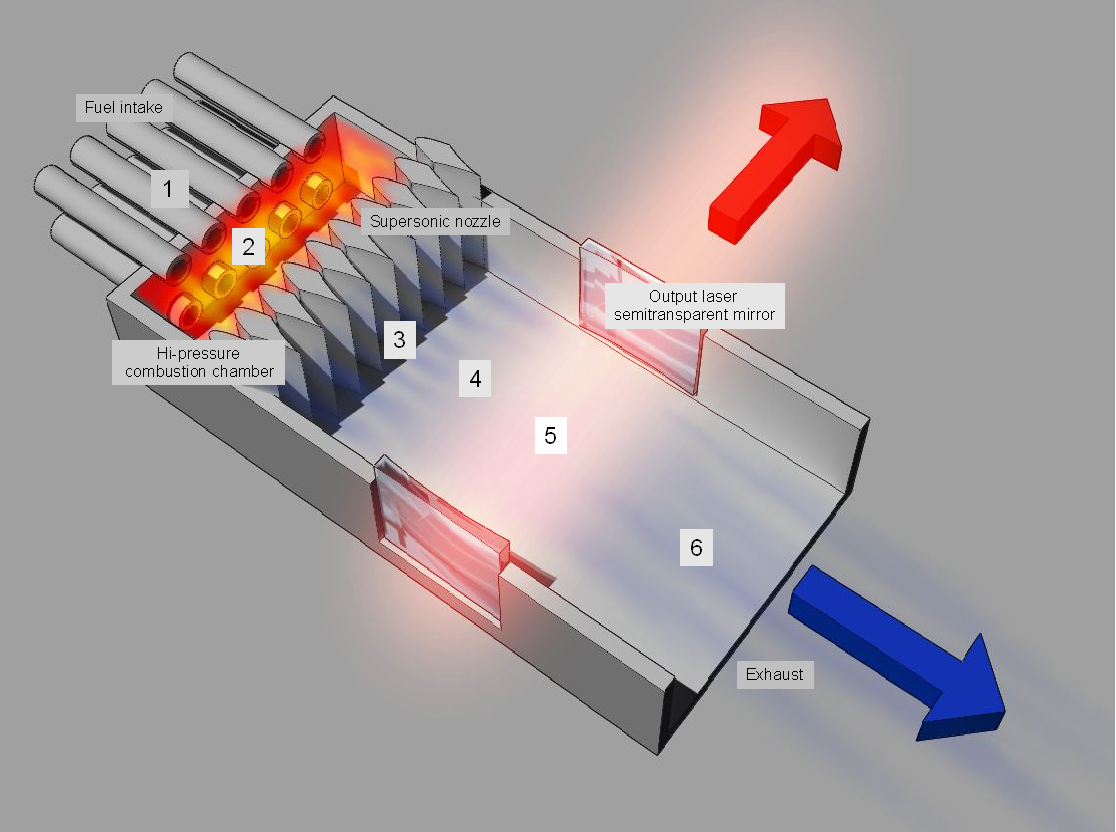 As this is a vibrational state transition, the laser beam has a relatively long wavelength, around 10 µm. They're apparently used in military applications because they can have high power outputs.

Regarding to your logic, the total amount of electrons at states with E2 and E3 altogether could be bigger than at ground state (with E1). It is inversion, isn't so?

Thus the thermal invertion could be realized in three-level scheme but it is impossible at two-level system.

The difficulty is to find a system with appropriate levels such that state $|2\rangle$ is unstable and cannot be thermally populated. For temperatures above 10000K you can think of excimer lasers - normaly they are pumped by a strong electric discharge, but if you imagine another way of heating the gas to such temperatures, it could also work.

Not the answer you're looking for? Browse other questions tagged statistical-mechanics laser or ask your own question.