What are the electromagnetic fields of a photon?

I'm looking for expressions for the electromagnetic fields (preferably $E$ and $B$) of a typical photon which is localised in space to some extent (i.e. I'm not interested in the infinite plane wave solution of Maxwell's equations).

The short answer is $\vec E=\vec B=0$. Strange as it may sound, this is only one of the numerous counter intuitive facts of the quantum realm. But first let me try to clarify, without going into mathematical details, the context within which these equalities should be interpreted.

Perhaps one of the easiest ways to approach the quantum nature of the electromagnetic field in the vacuum is to study the field in a perfectly conducting cavity.

Classically, such cavity supports distinct, countably infinite modes, each with its own specific frequency and spacial profile. The electromagnetic field attributed to each mode is completely defined by the shape of the cavity, up to a multiplying constant, which represents the energy contained in each mode.

In the quantum field approach, the values of the energy each mode contains are quantized and equally spaced, given by the expression $$E = \hbar\omega (n+1),$$ with $n$ being equal to "the degree of excitation", or number of photons of each mode.

The number of photons is an observable physical quantity related to the operator $\hat{N}$, but in quantum optics, as well as in single particle quantum mechanics, not all operators of all observable quantities commute. In particular $\hat{N}$ does not commute with $ \hat{\mathbf{E}}$ and $\hat{\mathbf{B}}$, the operators of the electric and magnetic field respectively. In other words, one cannot know the number of photons and the value of the electric field simultaneously.

When the cavity is in an eigenstate of $\hat{N}$, which is usually called a number state, or Fock state, the expectation value of the electric field operator and the magnetic field operator is equal to zero. This is what the expression at the beginning implies. On the other hand, the fluctuations are proportional to the classical values of the field and increase with increasing numbers of photons.

States where the expectation value of the electric field takes its classical value, are called coherent states and are considered to be the ones closest resembling classical light more closely. In such states, the exact number of photons is not known.

To rephrase my initial statement, it is impossible to attribute some field value to a photon, except in the sense of the expectation value in a 1-photon-number state, where it is always equal to zero.

Light, the classical electromagnetic field , is built up/emerges from a large number of photons, not in a simple manner.

Photons are elementary particles and therefore can only be described within a quantum mechanical framework. They have a wave-function that obeys the potential form of Maxwell's equations turned into operators which operate on the photon wave function. In this link a path is shown of how the classical wave emerges from the quantum state. Hand-waving my understanding of this: a photon, in addition to its spin, has information connected with A, the electromagnetic potential which information builds up the corresponding potential of the classical wave, and thus the macroscopically observed electric and magnetic fields of light.

There exists also this preprint.

Properties of six-component electromagnetic field solutions of a matrix form of the Maxwell equations, analogous to the four-component solutions of the Dirac equation, are described. It is shown that the six-component equation, including sources, is invariant under Lorentz transformations. Complete sets of eigenfunctions of the Hamiltonian for the electromagnetic fields, which may be interpreted as photon wave functions, are given both for plane waves and for angular-momentum eigenstates

In this preprint there is explicit an E and B field in the expression of the photon wavefunction.( One should always keep in mind that the wave function squared gives a probability distribution).

The answer is: you can't ask. That is, the question is counter-factual, in the quantum-mechanical sense.

In quantum electrodynamics, your goal is to include electromagnetism into the same type of quantum mechanics that you use things like the motion of an electron around the atom or a particle undergoing diffraction in a double-slit experiment. In quantum mechanics, you take the dynamical quantity of interest (say, the position of an electron around an atom) and you build wavefunctions on top of that dynamical quantity: $$ \begin{array}{c} \text{classical mechanics}\\ x(t) \end{array} \ \mapsto\ \begin{array}{c} \text{quantum mechanics}\\ \psi(x,t) \end{array} $$ This means that you can no longer speak about "the" value of the particle; instead, if you decide to measure the position of the particle at a time $t$, then you can talk about the distribution of possible values and their probabilities (given by $|\psi(x,t)|^2$), as well as things as the average value, the width of the distribution, and so on.

In quantum electrodynamics, your variables of interest are essentially the electric field amplitudes* $E(t)$, so you do the same thing: you knock out the "having-a-value-ness" of that dynamical variable, and you change it for a wavefunction: $$ \begin{array}{c} \text{classical electrodynamics}\\ E(t) \end{array} \ \mapsto\ \begin{array}{c} \text{quantum electrodynamics}\\ \psi(E,t) \end{array} $$ This means, therefore, that you can no longer speak about "the" value of the electric field; it has become an operator and no longer has a value. Instead, you have some distribution.

Given some reasonable assumptions, the probability distribution for the amplitude of a given mode (i.e. some travelling or standing wave) when the field is in a one-photon state looks more or less like this: 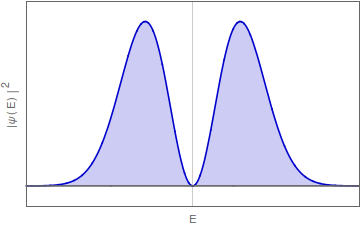 In this state, you can have a reasonably good idea of the value of the square of the amplitude, but most importantly you have no information about the phase of the oscillations of the node. Among other things, this means that the average value of the field from that mode at any given point will be zero.

There's plenty of additional subtleties to be had, but this is a reasonable starting point.

This obviously hides plenty of nuance, but the essentials stand. In reality, your dynamical variables are the amplitudes of given modes, i.e. $E(t)$ is the amplitude of some standing or travelling wave. There's also trouble in dealing with gauges and so on, but once you've done all that it still looks much the same.

Mathematica code for the image through Import["http://halirutan.github.io/Mathematica-SE-Tools/decode.m"]["http://i.stack.imgur.com/334QY.png"].

Not the answer you're looking for? Browse other questions tagged quantum-mechanics electromagnetism quantum-electrodynamics or ask your own question.