Of course, the $\mathrm{\rho^0}$ meson can decay in $\mathrm{\pi^{+}\ \pi^{-}}$ through the strong interaction. Using Feynman diagrams, I cannot understand why the same decay couldn't happen through the weak interaction. I attach the diagram I've drawn. 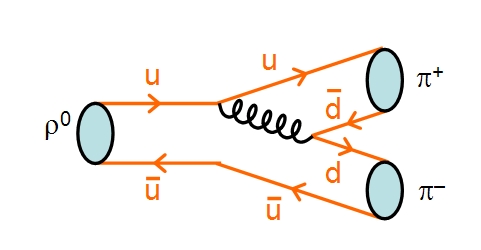 Assume for the sake of argument that this decay channel happens.

Now, ask yourself how you are going to prove it?

So, long story short: this is an experimentally inaccessible channel.

Note that rho meson has no strange quark i.e. its strangeness quantum number is zero. Similarly the decay products positive as well as negative pion has no strange quark ie. Strangeness quantum number is zero for decay products too. Thus, strangeness is conserved in this decay process of neutral rho meson. Now note that it is the rule of nature that strangeness is conserved in strong interaction/decay but NOT in weak interaction/decay. Thus this decay of neutral rho meson can proceed only via strong process i.e. via gluon and can never happen through weak process i.e can never happen through W boson, a mediator of weak interaction/decay.

Not the answer you're looking for? Browse other questions tagged feynman-diagrams weak-interaction mesons or ask your own question.