Holograms other than light

Normal holograms are, if I understand correctly, what happens when coherent light is passed through something that manipulates the photon's wave functions to be what would have been present had they been reflected off a real 3d object.

Is it possible, in principle, to do that with something other than light? In particular, I'm thinking of electrons when I ask this. Are electron-holograms possible?

(I'm imagining an electron microscope and some sort of nanoscale filter instead of a laser and photographic film, but this is just speculative).

Yes, electron holography is possible and it is an exciting, growing research field within strong field physics. The nicest way to do this is via laser-induced holography, where you use a strong laser field to ionize a molecule and then drive the photoelectron back to the ion to make it recollide. The initial experiments looked at the way the wavefunction was scattered off of the molecular ion to try and reconstruct its shape, a principle now called laser-induced electron diffraction.

Laser-induced electron holography, on the other hand, is now also possible. Here the electron wave is now stable enough so that the scattered wavefunction will visibly interfere with the non-scattered part, and this creates a complicated hologram in the far-field photoelectron spectrum. The dream here is to simply read off a photoelectron spectrum and re-transform it back to image aspects of the target molecule: the positions of the nuclei, the electronic density, and hopefully even the ionized orbital itself. As the field develops, it has become clear that this is a bit of a tall order, because the motion of electrons in strong fields can be very complex, but we can at least perform TDSE simulations which match the measured holograms. Holographic imaging of molecules is still some way away.

The sort of picture you get out of this looks like this: 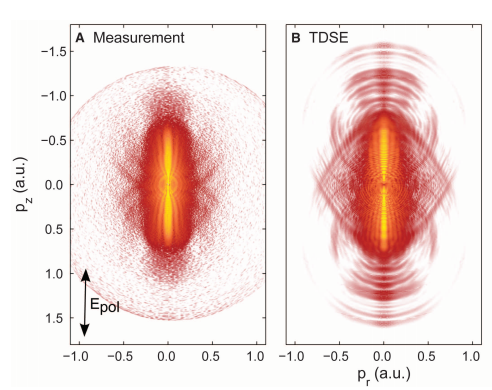 where the targets are noble gas atoms, imaged in

For a nice review, see

There is nothing in particular quantum mechanical about the general principle of holography. There is , for example, such a thing as acoustical holography, which is entirely explainable in terms of classical wave interference and diffraction. Lasers are used in "traditional" optical holography because they provide a fixed frequency source of light.

Here is a link to an article

that goes into a bit more detail about how acoustical holography works.

I can't comment on your specific question (electron holography) since that's outside my expertise, but as you probably know, it's the wave properties of electron propagation (de Broglie wavelength) that make electron microscopy possible. So given the proper setup to capture the magnitude and phase of the electron wave field caused by scattering off an extended source, it should be possible in principle to do electron holography.

Not the answer you're looking for? Browse other questions tagged quantum-mechanics hologram or ask your own question.

291
What is Chirped Pulse Amplification, and why is it important enough to warrant a Nobel Prize?

6
Can thick-film reflection holograms be used to create true mirrors?
3
Computer-Generated Holograms: I'm completely lost. How are they physically implemented?
4
How was the Michael Jackson hologram accomplished?
1
Is this a photograph of Surface Plasmon Resonance?
10
Momentum and acceleration of an atom after emitting of a photon?
2
Can we determine whether a photon's polarization is fixed or in a superposition
3
Is it possible to transform energy stored in anti-matter into coherent radiation?
1
Can astronomy be done by measuring laser emissions using Feynman's idea that a photon can only be emitted if it will eventually be absorbed?
2
Information in Holograms