How could the universe be infinite (what is meant by that)? [duplicate]

Ask Question
Asked 5 years, 5 months ago
Active 11 months ago
Viewed 238 times
3
$\begingroup$
This question already has answers here:
What does it mean that the universe is “infinite”? (2 answers)
Is the universe finite or infinite? (6 answers)
Closed 5 years ago.

I'd like to know what is thought of when saying the universe is infinite.

I've read about what is meant when astronomers are speaking of a "flat" universe and I have read that its size is most likely infinite. Yet Google couldn't forward me to a site where it's actually explained what that should mean.

These are some sites I looked but which did not explain it:

The observable universe is not infinite because the light near to the big bang took a finite time to get here at a finite speed.

Consider a young galaxy seen in the Hubble deep field. 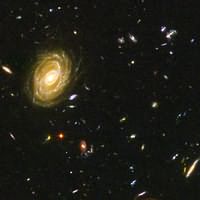 Where that galaxy is today, an observer living there can also see our galaxy as it was very young (with their own Hubble telescope).

Looking in the opposite direction, that observer can see other galaxies that we have never seen and never will do. Those are not in the observable universe.

Now consider another observer in one of those galaxies, and suppose he/she/other did the same.

That series of observers could continue much, much, much further. And maybe does too.

This could be described as a long, long, long series of overlapping light cones, but please check on this !

But we only have indirect evidence of the length of this series. Somebody saying that the universe is infinite, considers that this series of observers is not just very, very, very long, but infinite.

Not the answer you're looking for? Browse other questions tagged cosmology universe or ask your own question.