Is a spinor in some sense connected to space?

This is often visualized via the Dirac belt trick, constructing "spinorial objects" with strings attached to the surrounding space. But what does that really mean?

I am familiar with the usual arguments (homotopy classes etc), but those do not resolve my issue/trouble making sense of spinorial objects - therefore I need further help. Thank you very much!

I'm not entirely sure what OP's question (v4) is asking, but here are some comments: 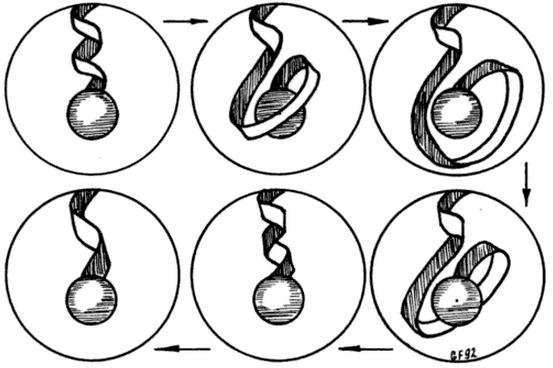 II) As for the title question Are spinors somehow connected to spacetime? one answer could be: Yes, in the sense that the mere existence of spinors puts topological constraints on possible spacetimes. In detail, the existence of a globally defined (Weyl) spinor on a (spacetime) manifold $M$ has the following topological implications for $M$:

You might equally well ask, "How does the physical belt in the Dirac trick sense the topology?" This question is, when you think about it, no less mysterious than yours. The answer, by experiment, is that it simply does.

And ultimately, if something transforms "compatibly" with the Lorentz group, or with $SO(3)$, then there is really only a one-bit question to ask: are we talking about a representation of the original group (i.e. $SO(3)$ or $SO^+(1,\,3)$) or its double cover ($SU(2)$ or $SL(2,\,\mathbb{C})$)? There are no other possibilities (as you probably know). The question is pretty much the same for an electron or a Dirac ribbon.

The Dirac belt is only a physical analogy - albeit a pretty good one - for a homotopy class for a $C^1$ path through $SO(3)$ linking the identity to a given $\gamma\in SO(3)$. If you idealise the physical belt to a set of mathematical idealisations that intuitively seem pretty reasonable (i.e. in keeping with our experimental intuition gleaned from playing with ribbons and Dirac belts), then yes, the analogy becomes exact, as I discuss in Example 14.23 of my article "Lie Group Homotopy and Global Topology" on my website.

But then your question is tantamount to asking why does the real, physical object (Dirac belt) behave in the way described by the mathematical idealisations I talk about in my article. The answer is simply a wholly experimental one, to wit: it simply does, by experimental induction! You can't dig any deeper than this.

Now, you could ask a somewhat similar question along the lines of "Can we say spinors behave as though they are linked with little ribbons to spacetime, only in the sense of being mathematically analogous to the mathematical idealisation of a Dirac belt that, e.g. I discuss?" then the answer is of course yes. But this is subtly, but most assuredly, different from your question.

You can then say that any experimentally spinorial object: electron, any spin $\frac{1}{2}$ particle or indeed Dirac ribbon is experimentally seen to seem to somehow keep an "imprint" of how they have been rotated (path dependence/memory). Things that keep this imprint (i.e. recall the homotopy class) are by definition experimentally analogous to a member of the universal cover of $SO(3)$ or $SO^+(1,\,3)$.

Not the answer you're looking for? Browse other questions tagged differential-geometry spacetime group-theory topology spinors or ask your own question.

9
What compactifications of the Poincaré group have been studied?
1
Necessity, significance of Spinors
22
Are fermions intrinsically non-local?
7
Physical intuition of spin connection and spinor bundles?
0
Is spinor the sum of scalar, vector, bi-vector, pseudo-vector, and pseudo-scalar?
6
Why would a spinor transform under Lorentz transformations?
5
Existence of spin-$\frac{1}{2}$ representation corresponds to $\text{SO}(3)$ having double cover?
13
What exactly does the belt/plate trick demonstrate?
4
Rotation of a Spinor