I met a statement, that Lorentz force disobeys the third Newton's law.

Also I met some setups, where it was stated, that third law is violated. Also I met some explanations about WHY it is violated, saying that momentum is transferred to the field, like in "duplicate" question: Apparent violation of Newton's 3rd law and the conservation of angular momentum for a pair of charged particles interacting magnetically

But my question is different. I am disputing the fact itself. Is this really true, that it is possible to observe third law violation (i.e. momentum leak) in table experiments?

For illustration suppose we have two conducting parallel horizontal plates and two perpendicular horizontal rods between them. Rods have contacts with plates, so that one end of each rod is contacting one plate and another end is contacting another. Contacts go vertical, but they are infinitesimally small and we can ignore forces, induced by them.

So, two rods are perpendicular and have current flowing through them. 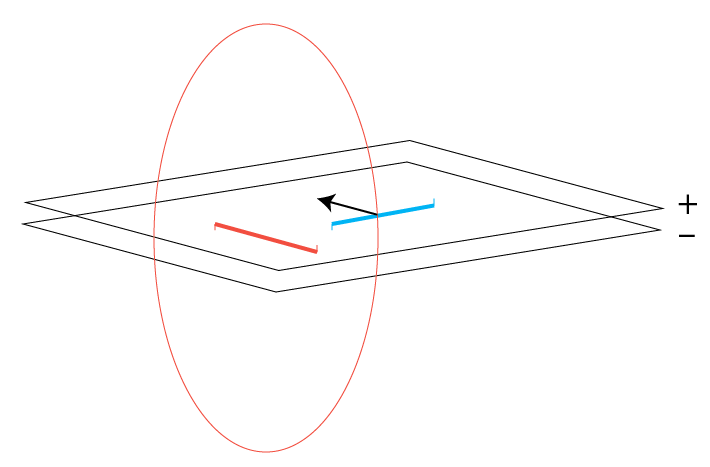 Magnetic field of red rod is shown by red ellipse. It reaches blue rod in the center and since it's perpendicular to the current, it applies a force to blue rod, shown by black arrow.

Magnetic field of blue rod is not shown. But it's geometry implies that red rod falls into the center of symmetry. So, there is no magnetic field, applied to red rod.

The question is: will the momentum lack be observable here?

This setup is taken from "duplicate" question setup, where two charged particles were moving. But I am not insisting on this setup.

Please suggest ANY other setup. I have my laboratory table, have wires, batteries, have Wimshurst machine etc.

Can I observe third law violation? If "yes" then "how"?

You've probably heard that photons are massless, and that they are quantums of electromagnetism. So even if you aren't going to do quantum mechanics you might worry that forces aren't going to cut it, there is no easy meaningful way to have $F=ma$ for a massless particle. But you can talk about momentum, e.g. $F=dp/dt$.

So momentum conservation is what Newton's third law is really about if you want it to be general. The other thing is that the electromagnetic fields themselves have energy and momentum and angular momentum. So what happens is that the fields can exchange momentum with the charged particles. And in that sense momentum is conserved again.

edited to respond to the edited question

If you've never heard of fields, but you have equipment then almost anything violates conservation of mechanical momentum if you have some dynamics beyond steady currents and steady charge distributions as long as you can measure things really quickly and precisely. The principle reason is relativity, if some charges move near $\vec{r}=\vec{0}$ at $t=0$, then charges over at $\vec{R}=\vec{a}$ won't react until later, specifically not until $t=|\vec{a}/c|$. So move one charge or wire about, then wait long enough for the other to react and at the moment that the other reacts there is a violation. Even if you set up a very nice symmetric situation in one frame, if there are unsteady currents or unsteady charge distributions, then there is a frame where some of those effects are currently being large while others are being small so at that moment they aren't equal and opposite. But this has nothing really to do with electrodynamics except that electrodynamics is naturally a relativistic theory. Any relativistic theory is likely going to need fields that carry momentum to save conservation of momentum.

Not the answer you're looking for? Browse other questions tagged newtonian-mechanics electromagnetism or ask your own question.