How is this a gauge choice mathematically?

I've been reading an article about the "square cat", which is described as the system bellow 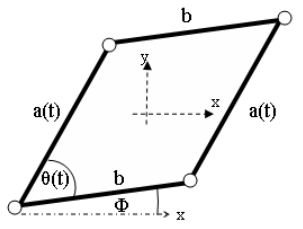 Such system is a deformable body that can change $a$ and $\theta$ but has $b$ fixed. The article uses this to model a cat falling without the action of external forces and tries to show if the cat can change it's orientation.

The idea basically is to represent as in this figure the orientation by the angle $\Phi$ between the $x$-axis and the $b$ axis of the body. Now comes the thing: the problem can be stated as a gauge theory problem considering the space of shapes $S$ of the body as the space of tuples $(a,\theta,e^{i\phi})$ with $e^{i\phi}\in U(1)$ representing the orientation by an angle $\phi$.

That is all fine, my doubt is the following: as I've read sometimes, a choice of gauge is a choice of local trivialization for the bundle, which is equivalent to a choice of a section of the bundle. That is a function $\varphi : S/U(1)\to S$. My understanding is: such a function gives for each unoriented shape one default oriented shape so that we can measure the orientation from there.

On the article, a choice of gauge would be to choose the other line. Measure the orientation with respect to the $b$-axis or with respect to the line joining oposing masses. I can't see how this idea from the article is a choice of gauge. How can this b written as a section of the bundle? A section, as it seems, would give simply the initial angle with the $x$-axis rather than determine where to stop measure the angle.

Choosing a gauge usually means implicitly performing a gauge transformation such that a given condition holds, such as choosing a gauge $\partial_\mu A^\mu = 0$ in electrodynamics.

Not the answer you're looking for? Browse other questions tagged classical-mechanics mathematical-physics gauge-theory gauge or ask your own question.

2
Relation of angular speed of a rigid body to Euler's Angles
18
Global vs. local gauge group in mathematical sense - physics examples?
0
Allowable gauge transformations in electrodynamics
7
Fields are sections of a bundle associated to a $\mathrm{SO}(1,3)$-bundle or to a gauge group bundle?
6
What exactly are the sections in gauge theories?
12
“Gauge Freedom” in GR
5
Intuition behind bundle constructions in curved space-time and gauge theories