Is there a repulsive force between neutrons at all distances or just real close?

I know we aren't meant to ask more than one question but I think this is interwined with my first one. Is there a mathematical way to express the strength of the repulsive force with distance?

There is a "pseudo-repulsion" between neutrons of the same spin state caused by the Pauli exclusion principle. However, the Pauli exclusion principle only prevents neutrons occupying the same "phase space" (momentum$^3 \times$ volume) and is not usually regarded as a fundamental force. Indeed the derivation of neutron degeneracy pressure assumes that the neutrons are ideal, point-like, non-interacting particles. Thus neutrons could get arbitrarily close together so long as their momenta are extremely large. In addition of course, two neutrons with opposing spins would be unaffected by the PEP.

The real repulsive force between neutrons is caused by the repulsive core of the nuclear force - the residual component of the strong force. This force does not depend on nucleon isospin, but does depend on particle spin. As far as I understand it the force does not have a simple radial dependence and it is not spherically symmetric either. The "range" of the force is governed (in models) by the exchange of virtual particles and is of order $10^{-15}$ m. Experimentally the force between neutrons becomes strongly repulsive closer than about $7\times10^{-16}$ m and should (or might) be understood in terms of the Pauli exclusion principle acting at the quark level.

I do not think there is any simple analytical model for the nuclear potential, just approximations. Many of these look a bit like the Lennard-Jones potential between atoms in molecules. Here is one (from http://www.vanderbilt.edu/AnS/physics/volker/p330b/add_lecture_materials/phase_shift/nn_scattering.html ) deduced empirically from scattering experiments; the n-n curve is the dotted one, for anti-aligned neutron spins (i.e. not affected by the PEP). You can see that the gradient becomes very steep and negative (repulsive) at small separations, despite the fact that the neutrons are not in the same quantum state. 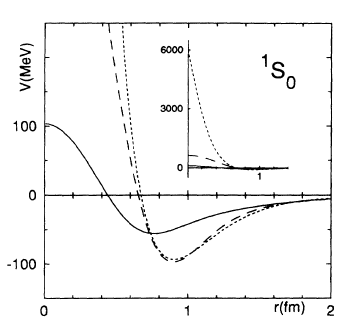 Also see @DarenW 's answer to Why do neutrons repel each other?

Not the answer you're looking for? Browse other questions tagged nuclear-physics neutrons magnetic-moment pauli-exclusion-principle strong-force or ask your own question.

27
Why do neutrons repel each other?

1
Why does the nuclear volume scale (roughly) linearly with number of nucleons?
2
Why don't neutrons cluster on their own?
4
How neutrons interact if not through an electromagnetic interaction?
0
formation of atomic nuclei from nucleons
4
Why do neutron stars with more mass have smaller volume?
5
Yukawa force vs Nuclear force
1
Are neutron star cores thought to be stiffer than photon gases?
0
Does fusion only occur with ions?