How can a droplet of liquid float on the surface of the same liquid?

This can happen during the rain, or when pouring water. Sometimes small (1-2 mm) droplets of water float on the surface for some time (a few seconds) before coalescing with the big body of water. A very refined example of this phenomenon is this experiment, captured by a high-speed video camera.

This study explores it in detail, but the explanation for this behavior seems implicit.

So how can this behavior exist at all? I imagine that the forces of gravity and surface tension act on the droplet in the same direction; so what supports it from below (or even makes it bounce, like in the video)? Is it the trapped air that escapes very slowly to the sides? If yes, why is it so slow?

The phenomenon you mention is called Noncoalescence, and there are many beautiful experimental examples of it (see for instance [1],[2]).

Indeed, droplets of various liquids may float on the respective surfaces for extended periods of time prior to coalescence. The problem of explaining why this happens has been addressed by Klyuzhin et al. a few years ago, with some attempts to explain it better than had been done in the past.

I quote, from this paper:

When a droplet of liquid falls onto the surface of the same liquid, instant mixing is generally expected. However, even in everyday situations, small droplets can sometimes be observed to float on surfaces without instant mixing, for example, when droplets fall into sinks or during rainfall, when splashes create tiny droplets that may move swiftly across puddle surfaces. Despite such common experience as well as a number of relevant scientific studies, still, the concept of delayed coalescence remains counterintuitive.

A number of hypotheses have been proposed to explain the delayed coalescence. In 1900, Reynolds proposed that droplets can reside on the liquid surface because a thin film of air becomes entrapped underneath the droplet. However, Mahajan later reported that water did not form floating droplets at atmospheric pressure but that droplets could be more easily produced at higher altitudes where air pressure was lower, the opposite of what was expected from Reynolds’s hypothesis. The positive effect of reduced air pressure was more recently confirmed in studies of oil-droplet lifetime. Because diminished air pressure should diminish the thickness of any air cushion, these latter observations have seemed difficult to reconcile with the early air-cushion hypothesis.

They then propose an explanation for this mechanism:

Recent results from this laboratory show an interfacial zone extending down from the surface sometimes by up to hundreds of micrometers or more, enhanced apparently by incident infrared radiation and also by oxygen. The presence of a substantial interfacial layer could work as an effective barrier that prevents instant coalescence.

A possible mechanism based on the presence of this interfacial layer is illustrated in Figure 13. Before droplet and bulk come into contact, both entities are presumed to have significant interfacial layers (1), which prevent immediate coalescence (2). Once they touch, the interfacial layers begin to dissipate (3). When the layers have dissipated sufficiently, coalescence begins, and water from the droplet begins to flow downward (4). As the water evacuates, the droplet diminishes in volume, creating a narrower entity between the droplet and the bulk (5). The pinch-off creates the daughter droplet (6). The process then repeats, perpetuating the cascade. 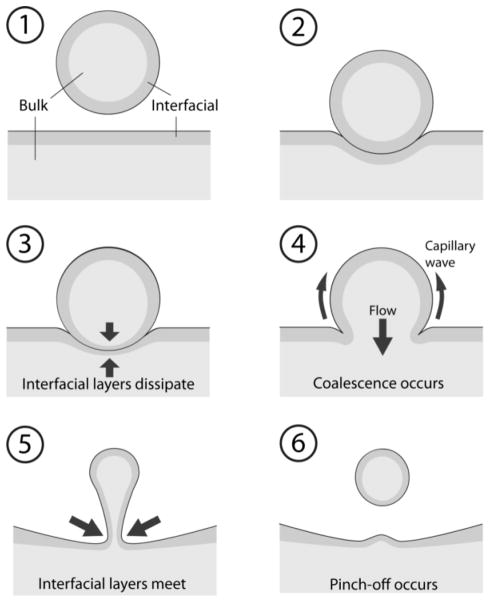 Not the answer you're looking for? Browse other questions tagged fluid-dynamics everyday-life surface-tension or ask your own question.

7
finding equation of a water droplet
1
Noncoalescing and bouncing droplets
0
What determines whether liquid droplets will combine or push into each other?
2
Why do few droplets of rain fall a short time before a downpour?
0
What causes droplets to run upward (in relation to the Leidenfrost effect)?