Does the moment of inertia change? 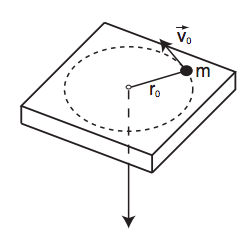 I am currently working on a practice problem for my upcoming exam and I have difficulties getting my head around moment of inertia.

If the ball has mass $m$ and is going around in a circle with velocity $v_0$ then I can determine it's angular momentum.

Now suppose someone pulls on the string until the ball goes around the circle with radius $\frac{r_0}{2}$. What is it's new velocity?

I assumed angular momentum is conserved (I am not sure about this).

This would mean that half the radius implies double the velocity. I am somewhat puzzled by this because $v=\omega r$ tells me that the velocity should be half of the original velocity unless $\omega$ has changed. This brings me back to moment of inertia. Did moment of inertia change when the ball went from $r_0$ to $\frac{r_0}{2}$? This would explain the change in angular velocity since $\vec{L}=I\cdot \vec{\omega}$.

The moment of inertia has indeed changed, since in general it is $mr^2$, so varying the distance $r$ from the axis varies the moment of inertia. This is what happens to ice skaters when they spin and contract their arms https://www.youtube.com/watch?v=AQLtcEAG9v0. They change their moment of inertia while conserving the acquired angular momentum, resulting in a different angular velocity.

Not the answer you're looking for? Browse other questions tagged homework-and-exercises classical-mechanics rotation moment-of-inertia or ask your own question.

0
Area moment of inertia of regular $n$-gons over polygon center $O$
2
Does angular momentum of a system whose moment of inertia is changing remains constant?
0
Moment of Inertia of half of a cylinder
1
Angular velocity of cone rolling on ground
0
Isotropic oscilator $\vec{F}=-k \vec{r}$ in Classical Mechanics
2
What does diagonalizing inertia tensor do